Has anyone else finished this? I know it’s still early on release day.
A few things stood out to me and I’m wondering what others think.
.

(Trying to add some lines so spoiler lines don’t show up on the main page and ruin it for people)
.

First, was the entirety of Doomsday Clock written off as just another reality? I know it’s not a final statement but one panel that felt like a last minute thought kind of made the whole thing seem inconsequential.
Second, was anything even resolved over the last 39 issues? The JL has made zero progress against “doom”, the JSA was written away, and the story concludes without a conclusion. This whole series has felt like a very very very long prologue to whatever Snyder and Capullo are doing next.
Don’t get me wrong, I have enjoyed it and the art is good but this whole thing was sold as an event and besides trying to sell Year of the Villain tie ins I can’t think of any real consequences to the DCU.
I hope the Metal sequel starts soon (probably spinning out of Hell Arisen) because I want to move on.
Any thoughts on that sequel teaser? I’m wondering if Mayhem will be in the title. I’m hoping it ties up Metal and JL lose ends, cleans up or clarifies DC continuity, and doesn’t hinge on Batman Who Laughs. Enough of him.

I feel duped by DC again.
That’s not how it was supposed to end. I was sure there’d be a big payoff for the readers who suffered this story from beginning to end.
This was a Lex Luthor story.
It should’ve been much shorter

I cannot believe more people haven’t chimed in on this. I have (mostly) enjoyed Snyder’s run on Justice League and was willing to forgive the never-ending, drawn out nature of this tale, but that last issue?? What the hell was that? It just…ends. Did I miss something? There seemed to be no resolution, and with Vendetti starting a brand new story next issue, what are we supposed to think? SO frustrating. Scott Snyder needs to learn when to snip a story off and give fans some semblance of finality. An ending can be ambiguous, certainly, but it needs to also satisfy.

I was reading on my iPad and thought something was wrong with the file because it just ended. I thought pages must be missing.
Snyder’s Batman is one of my favorite runs and Metal entertained me but this was a lot of buildup for nothing. Comic book blue balls. Crass but accurate.

I think Vendetti’s story is a prequel to Year of the Villain and Snyder’s next metal story is supposed to pick up where JL 39 leaves off. I’m trying to find the source where that was confirmed.

So how do we pick up on all the other stories that had all of these Year of the Villain tie ins? If I read this right, the JL is gone, plucked from existence but we’ve got other stories that referenced all of these events happening. I don’t know how you recover unless everyone’s stories get wrapped up quickly. Looking at the solicits going into April, some of these stories read as if nothing happened. Snyder better put a bow on this with his follow up. Is it odd to say the most interesting thing I found about this book was the “what’s next image” of Wonder Woman with a chain saw? Pictured a little bit of Evil Dead going on and immediately " Groovy!"

I saw the prequel thing too, I think Snyder said it on Twitter. So I wonder if issue 40 takes place before The Totality or somewhere after that but before Villain.
I thought I saw Aquaman in materials for the Venditti run and he has the tattoos but wasn’t that after Drowned Earth?
I’m perfectly fine with self contained stories but not mid-event. I thought there would be some official announcement when JL ended but now I’m guessing it won’t be until after Hell Arisen, which means this stretches even longer since nothing has been solicited.
Greg Capullo references some kind of injury on Twitter that he is bouncing back from so I wonder if the sequel got behind schedule. Pure speculation on my part, his injury may have nothing to do with his ability to work.

Yeah the Tattoos are are part of DeConnick’s run on Aquaman right now.

I felt frustrated several issues back and stopped buying this. I’m not sure I will list Justice League among my favorite things by Snyder. He has done and will continue to do many great comics. I just don’t think the pieces, as intriguing as so many of them were, came together in the way he imagined they might.

I doubt it will make my list either. Some kind of major twist or plot development would have to happen that puts JL in a new light and justifies the run, but I don’t see that happening.
For example, when I saw Unbreakable in the theater, I hated it and wanted to walk out but then in the last few minutes I realized it was a superhero movie and my whole perspective changed. It’s not on my favorite movie list but it is in a better place in my memory.

You may be reading Justice League expecting the JL to win…

Let me propose the idea that this stopped being a Justice League book and became a Legion of Doom book in Issue 13: 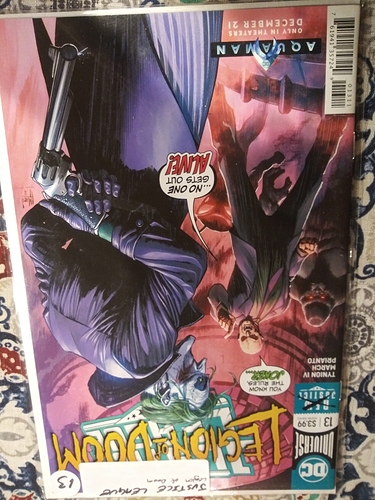 We’re in the thick of Year of the Villain, so of coarse the heroes are going to be pushed to the background and the Villains are brought to the foreground.

And let’s not forget Gotham is in a complete disarray, Red Hood is training an entirely new set of Super Villains and Wonder Woman 750 has been released with more 750s to come with what ever this 5G thing is.

I suspect the DC Universe as we know it is ending. I don’t see how Hell Arisin can end in any way other than absolute destruction.

Although I do expect them to win, it’s more that I expected some kind of payoff after 39 issues. It’s like it didn’t even end it just paused and we don’t know when it starts again.

I’m just enjoying the ride and I’m not trying to make any predictions.

I do however, expect a total reboot with the titles that adults buy more of moving somewhere while DC brings in newer, younger heroes marketed toward young people.

Multiverse, Dark Mutiverse, Metaverse, Dark Metal, Doomsday Clock, and the forthcoming 5G. Synder wrote one story, Johns wrote another. Are we supposed to choose as to which one is canon? I’m a tad confused.

I’m pretty rigid so I wish DC would just tell us. And release a series like Who’s Who with straightforward “this happened, this didn’t”. I liked some of what N52 did but didn’t like how they crammed all of Batman’s continuity into 5 years.

I started a new thread for #40. I’m even more confused.