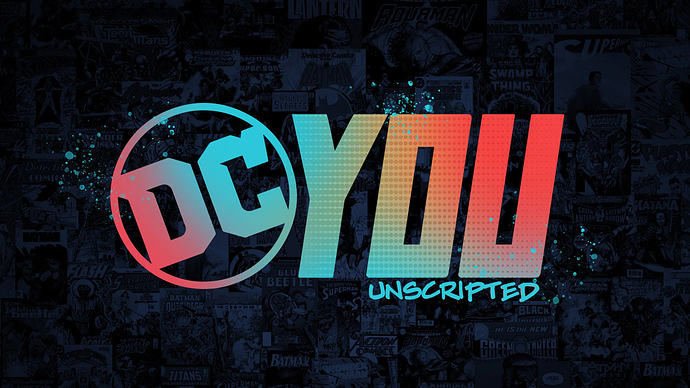 In case you missed this morning’s News article, catch all the details of our upcoming pitch event for DCYou Unscripted here!

At last year’s New York Comic Con, DC Universe announced its plans for DCYou Unscripted, a contest in which one DC fan will have the chance to see their own unscripted DC series produced for DC Universe. And today, we’ve learned the names of the judges who will select the three concepts to be granted a series pilot – as well as the mentors for the contest’s ten finalists – and it turns out they’re a who’s who of top creative talent and entertainment executives!

The contest, in which one finalist’s series will ultimately receive a full order as a DC Universe exclusive, is the result of DC’s partnership with Ideas United, and it’s received over 1,100 submissions for series ideas, ranging from game shows to docudramas.

This week, the contest’s 10 finalists are traveling to DC’s headquarters in Burbank, California, where they will meet with the mentors who will help them refine their pitch concepts. These mentors include Dan Evans, the Vice President of Creative Affairs and Creative Services at DC, Bridgette Theriault, the Senior Vice President of Development at Telepictures, and Phil Jimenez, the acclaimed writer and artist behind hit comic titles like Infinite Crisis and Wonder Woman .

The contestants will then be given five minutes to pitch – followed by a five-minute question-and-answer round with – DC Publisher and Chief Creative Officer Jim Lee, DC Publisher Dan DiDio, and Stage 13 Senior Vice President and General Manager Diana Mogollon,

Here are the ten finalists:

All fans will have an opportunity to watch the pitch event, when it airs on two episodes of DC Daily on DC UNIVERSE on January 23rd and 24th, 2020. The three finalists who receive a pilot order will be announced on January 24th.

Really excited for this!

Really curious and excited to see how this turns out. Congratulations and good luck to the ten finalists!

I cannot wait to see and hear some of the ideas folks have come up with.

Congratulation to the top ten finalists, I wish you all the best!

This is so exciting! I can’t wait to watch these episodes to find out more. We are getting a new DC exclusive! I want to know what it is!!

Good luck to the finalists!

We should be the ones doing the voting! lol

I’ll sure be tuning in! This might even be fun to have a Watchalong 2 nights for.

Oh I am so there… looking forward to this. Can’t wait to find out what cool ideas the finalist came up with. Sure the only bad part will be knowing only 1 of them will ultimately be a DC Universe show.

Congratulations to all the finalists

No lie, I was a skeptic but I am excited about this show. [×]

Congrats to the Ten Finalists!!! You all must be very excited for this unique opportunity!

Very excited for everyone involved. I wish I had the time to come up with something & pitch.