I’m starting a huge JSA run read through. A few titles seem to have been going on at the same time like JSA, JSA All-stars, and JSA classified. Do they overlap storywise? Should I be reading them in release date order or can I finish JSA and move on to all stars then classified?

Side question: does any one know where I can read JLA/JSA Virtue and Vice, I can’t seem to find it on infinite?

Virtue and Vice is in JSA by Geoff Johns book 2. It takes place after Stealing Thunder and before Princes of Darkness.

JSA All-Stars (2003) is in JSA by Geoff Johns book 3. It takes place right before Princes of Darkness.

JSA Classified takes place after Princes of Darkness. It is a group of character focused stories with no impact on the greater plots.

I’ve actually put a lot of painstaking work into a personal reading order for myself over the past several years, mainly focused around the JSA and several other characters/series that I’m interested in reading. I’m happy to share an abridged version with you. This runs from cover date April 1999 (JLA #28) to October 2011 (Justice Society of America #54). If you want anything before or after that, just let me know.

I’ve composed this list in such a way that individual storylines are not broken up while jumping back and forth between series, but everything should be concurrent. In other words, unless it’s a crossover storyline directly running between two series, you’ll mostly be reading a trade at a time while reading multiple series at a time if you use my list (if that makes sense).

I have included event series that the JSA are involved in and which cross over with the various JSA series; feel free to read any, all or none of these. Some (actually a lot) of the things on the list aren’t available on DCUI, but I’ve included them for completeness’ sake; I have denoted these series/issues. If you’re really dedicated to reading everything, you may be able to track them down elsewhere. As far as I know, everything here should be in the right reading order, but if I’ve made any mistakes or left out anything that should be there, please let me know.

P.S. I have a much more extensive version of this list that integrates related series that ran at the same time, like Hourman, Stars and S.T.R.I.P.E., Power Girl, Magog, etc.; if you’d like that, just let me know.

Thanks I kind of did a similar thing with all JSA titles and release dates I started reading today but jumped into thing that are solos like return of the JSA, and JSA strange adventures. After I finish that I’ll take a look at your list. Really appreciate it!

Thank you again, it’s a great list I’ll be following it. Just a quick look through JSA All-stars is listed as not on DCU but it is now. The liberty file isn’t listed as well but that could be because it’s an elseworlds story.

If there’s anything after 54 I would love to read that as well if your list continues.

Just a quick look through JSA All-stars is listed as not on DCU but it is now.

There are actually two different series called “JSA All-Stars”. The first, JSA: All Stars (colon, unhyphenated) was a limited series that ran from 2003-2004 (concurrent with JSA (1999) #48-55), written by Geoff Johns and David S. Goyer (the writers of the regular JSA series). That series is not on DCUI. The second, JSA All-Stars (no colon, hyphenated) was an on-going series that ran from 2010-2011 (concurrent with Justice Society of America (2007) #34-51), after the team was split in two, written by Lilah Sturges. That series is on DCUI: 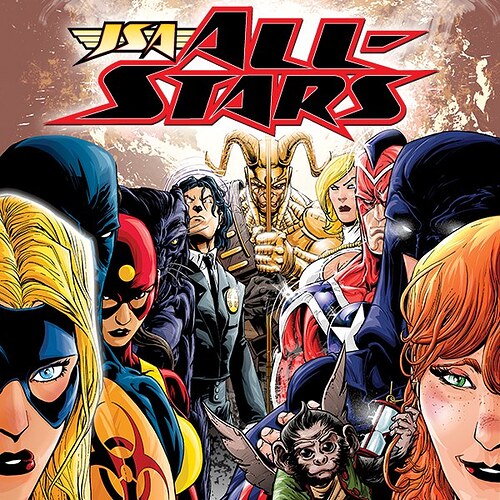 The younger members of the Justice Society strike out on their own to form their own team of JSA All-Stars.

The liberty file isn’t listed as well but that could be because it’s an elseworlds story.

Yeah, I left that off. I haven’t read it, but just from looking at the summary, it uses only a couple JSA characters, plus Batman, so it’s JSA in name only.

If there’s anything after 54 I would love to read that as well if your list continues.

Everything after #54 is when the New 52 starts. The Justice Society series was replaced by Earth 2 and Worlds’ Finest. Neither of these are technically Justice Society series, but focus on New 52 versions of Justice Society (and related) characters. But it’s the closest you’re going to get to JSA during the New 52 era. There still hasn’t been a JSA or Earth 2 series since the 2016 rebirth, but the JSA do appear in a few series (mainly events), which I’ve included on the list:

Again, if I’ve missed anything, or if anything is out-of-order, please let me know.

Yeah, I left that off. I haven’t read it, but just from looking at the summary, it uses only a couple JSA characters, plus Batman, so it’s JSA in name only.

The first Liberty Files series is one of the best JSA stories ever.

The final series is set in the world of Liberty Files, has no JSA, and should be avoided at all costs.

It’s also worth mentioning that it’s been pulled from DCUI and all digital sale, which I just found out in the course of putting together my posts above. It used to be on here, but The Whistling Skull is apparently a creator-owned character, so it is no longer available.

Thanks again for the list. I knocked out everything on it that was available and enjoyed every minute of it.

My pleasure. And that was fast!