I’ve decided to read the 1999 JSA series as my first formal introduction to the superhero group. Quick question-do

Are there any stories I need to read first or does the series do a good job introducing everyone?

Anything else I should know before I start reading?

The Justice Society Returns came out before JSA did, and while not necessary to read JSA by, it’s a fun read in it’s own right.

Stars and S.T.R.I.P.E. was published alongside JSA shortly after it began. You can read it as you want, but one isn’t needed to understand/enjoy the other.

Part of Geoff Johns’ genius is referencing past stories and characters in a way that makes you feel like you already know all about them, and that’s on full display with JSA.

I echo both replies above me. Jump right into the smorgasbord that is Johns’ JSA, cause it is awesome. And add JSA Returns and Stars and Stripe as extra spice if you want a little extra flavor.

I recently went down the same rabbit hole - enjoy! You can’t go wrong going straight to the main series. Or - If you want to do like me - I did a serious deep dive of related comics before starting the main series… Justice Society Returns miniseries, all of Stars and Stripe, the 3-issue Doctor Mid-Nite miniseries, Spectre 54 (Mr. Terrific intro), JLA 27-31 (gathers the JSA back together and introduces JJ Thunderbolt), Power of Shazam 45-47 (sets up Black Adam who is a major player in JSA), the Hourman series… hmmm am I forgetting anything? You could read Wonder Woman 125-136 which explains why Hippolyta is back to being a superhero.
Before you start the main series, read JSA Secret Files #1 which sets up the plots. As you go, there’s also some tie-in issues that are pretty relevant. Here’s the issue listing from the JSA by Geoff Johns TPBs:
JSA SECRET FILES #1, JSA #1-25, JSA: Our Worlds at War #1, JLA/JSA Secret Files & Origins #1, JLA/JSA: Virtue and Vice, JSA: All Stars #1-8, JSA Annual #1, JSA Secret Files and Origins #2, JSA #26-81
Lastly, right around JSA 25 or so, you should read the last issue of Starman #80, for a major event in Stargirl’s life

If you can get them I would seriously recommend the Justice Society of America 10 issue series from 1992 by Len Strazewski and Mike Parobeck. 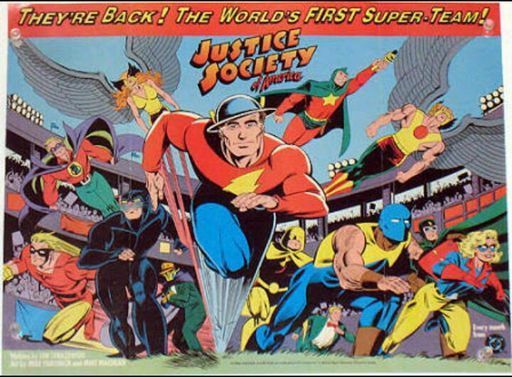 It features the first appearance of Jesse Quick who would go on to be a major part of the Johns Era JSA.

You’re in for a treat. I love The Justice Society, and Johns’ tenure on the book is one of my favorite runs on a series.

There’s 2 things I’d recommend in addition to what everyone else has. Doctor Mid-Nite, a 3 issues mini written by Matt Wagner, and The Specter (1992) # 54. They’re both the first modern appearance of 2 characters that get a lot of screen time in JSA. And the Doctor Mid-Nite issues are just some stellar stuff.

The James Robinson Starman is very good and influences the beginning of the run too, but its also very much its own thing, and at 75 issues a pretty big time commitment to read as well.

files away in mind for future

are the JSA back for real or are we still dealing with the time-lost WWII JSA?

This is the prequel series… 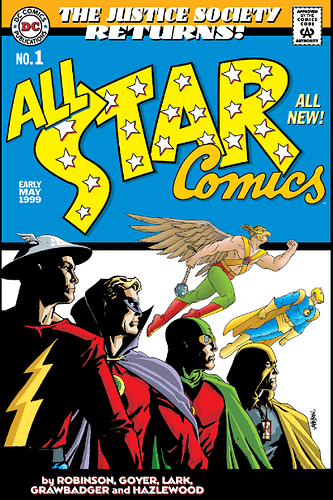 That leads to this… 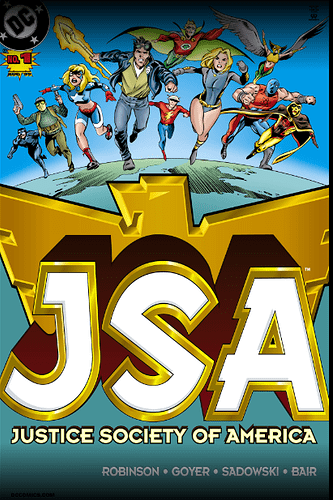 I loved this series. I remember when it first started and how exciting it was to see old and new members unite under the Justice Society banner once again. That initial arc with the search for the new Doctor Fate hooked me. I kept coming back every month because the book was so good. Even with tie-ins to crossovers like Our Worlds At War and Joker: Last Laugh, Johns found a way to address the crossover, but still make it about the characters. The main story didn’t stop just because it was a tie-in.

While I’ll admit the book started to fall off for me right around Identity Crisis, those first few years were really something special.

I would much have preferred the original JSA in post war America instead of the bait and switch DC pulled at the end of Justice Society returns. The series worked. I just would have preferred it better.

I started reading STARS and STRIPE first and i was only a few issues in when courtney was mentioned to be in the JSA already. Her series mostly deals with a secret super-villain conspiracy at her local high school. Super stand-alone stuff.