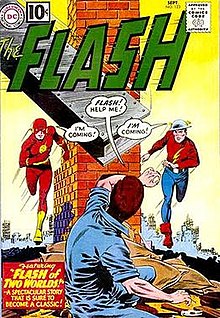 Hello and welcome to another session of the JSA Book Club. Join here. This week we turn to the Silver Age and the first appearance of the JSA after so many years in limbo. But first the Roll Call:

And now to bring this meeting to order

All Star Comics , which had been the home of the Justice Society of America, ceased publication under that name with issue #57 (March 1951) being the last to feature the JSA. (With issue #58 it became All Star Western and featured western stories) It would be many years before All Star Comics would return with its old numbering restored and would go back to telling stories featuring the JSA. (This would not happen until 1976) Enter the Silver Age, a new Flash called Barry Allen and a story called “The Flash of Two Worlds”. Published in September of 1961 this story, featuring Jay Garrick, lead to an interest in reviving Golden Age characters like the JSA. This was followed by other stories in The Flash that featured Jay and this eventually lead to the summer crossovers between the JLA and the JSA that a lot of fans fondly remember.

And that’s all for this week folks. Join us next time as we return to the story of Infinity, Inc.

Nice! Shouldn’t we also include the original Flash of Two Worlds story in #123 as well?

I mistyped it in word which is where I was pasting this from. I meant Flash #123.

looking forward to it…as soon as I finish up Infinity Inc soon…it’s like the food buffet on a cruise…without the virus!

I am going to try to get the reading in over the weekend. Things have been super hectic around here with everything on shutdown around here. Schools are closed and you know how things get with too much family togetherness going on

I hear you @Aurora. Also if things get to hectic for you let me know and I’d be happy to make posts for you if needed. Just send me the issue information so I know what Infinity, Inc issues you were planning to do for a given week.

Hope you and yours remain healthy and safe.

I’ve been pretty busy reading most of the He-Man and the Masters of the Universe titles on here. I’m diving in week 3! I’m pretty sure I’ve read most of these before but not in a while. Cheers mates!

Welcome to the club @hotstufflouieb. Glad you could join us.

Flash 123 is the 3rd most important book in DC history. (I’ll begrudgingly give Action 1 and Detective 27 higher importance)

Flash 123 gives birth to the multiverse and where would DC be without a multiverse. It is critical to DC lore and success spanning nearly 60 years. It’s importance can’t be overstated.

What did you think of Barry and Jay’s interaction in these issues of The Flash ?

It’s fun seeing Barry know stuff about Earth 2 because he read about it in comic books growing up. And @DeSade-acolyte is right, of course, about how important that first issue was to the history of DC.

Who was your favorite villain they faced together and why? Did you like seeing them face each other’s villains?

AntiMatter Man, because he was so kooky, and now I’m craving a throw down between the Anti-Monitor and him.

Regarding other Earth’s villians, it’s been so long that I don’t even know which villain goes where, so I’m neutral on that.

What did you all think of the first encounter between the JLA and the JSA?

The JSA/JLA crossovers were always a hoot.

That’s right…I said hoot. And I meant it, too.

What was your favorite JLA/JSA story from this batch?

It was that last one, although I don’t know how the two Earths were about to collide when it was established in previous issues that they occupied the exact same space, just at different frequencies.

I agree with you there @DeSade-acolyte. It’s a very important and pivotal issue.

@ralphsix I agree the JLA JSA crossovers are a hoot to read.

For Flash 123, the first appearance of the two Flashes together and the acceptance of another Earth vibrating in the same place at our Earth is, I do find it interesting that Gardner Fox fairly cleverly started the whole fourth world breakthru idea of the writer of the comic becoming a character in the comic.

Jeff Lemire’s Black Hammer really dig deep into this crazy concept recently. Marvel would do it in some of the early Fantastic Four as well as some of their mid-60s annuals but it was more tongue-in-cheek, they weren’t terribly serious I don’t think.

I noticed once again, when reading this first issue of your selection, it took me perhaps even three times as long to read a comic from 1960 as it does from reading a modern comic. It wasn’t quite as ponderous and slow as the 1940s comic we read the first week of the JSA Club, but I figure it may have taken me close to 15 to 20 minutes to get through this one.

One of the compelling reasons I went from buying physical comics for three or four dollars each to subscribing to digital unlimited platforms and being willing to wait a year to read the comics from when they were published is related to all this.

Spending $12 for three comics today that might take me 20 minutes to read them all is frankly kind of depressing when I realize I pay about the same for Netflix for the month but we get a whole month of stacks of movies and TV series to watch.

It was wonderful. Not like a comic book, not like Superman and Batman. It felt like Science Fiction, with a large amount of nostalgia, for a time I never experienced. Like reading The Star My Destination by Alfred Bester, creator of Vandal Savage and Solomon Grundy when he freelanced for DC Comics on the original Green Lantern, which was set in the future. Or More than Human by Theodore Sturgeon. set in the past.

If had plot and family.

When the plot of All Star 57 was illustrated, it looked so exciting. I wanted to know everything I could about the Justice Society in those day. Fifty years later, when I got a sigital copy of that issue, I was so disappointed.

The first team up was the best. Some of the costumes of the Justice Society was so cool. Others like the Atom seemed just thrown together.

I liked the villains in the second team up. I remembered their fate now, in the beginning of Crisis on Infinite Earths.

Third team up was not good. Bettee were to come with the Seven Soldiets of Victory, Freedom Fighters and New Gods leading the list.

I do enjoy reliving my childhood through comics as well. There are certain issues that take me back to those days and the JSA/JLA crossover issues are of that sort. Also, much like Batman #156, Flash #123 takes me back to a rainy Sunday in my grandparent’s attic and a box of old comics left behind by an uncle I never met.