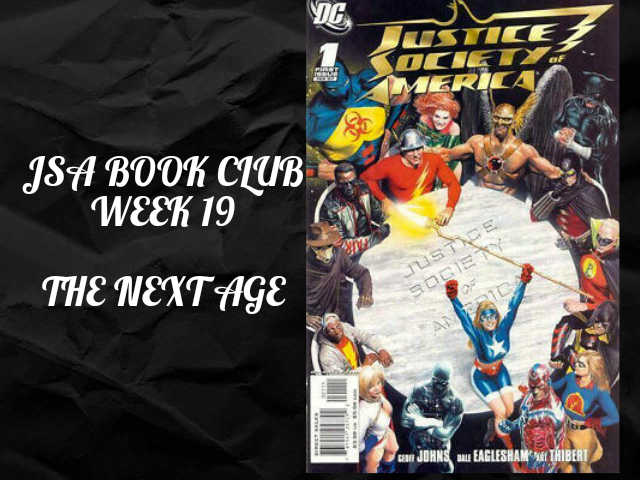 Greetings fellow JSA fans! Hope everyone is doing well and staying healthy. Got a shorter then normal set of readings for this week. We are traveling back to 2006 and the launch of a new JSA title: Justice Society of America.

Let’s call this meeting to order and meet these new kids!

And that’s all I have this week.

Join the JSA BOOK CLUB! We’d be happy to add your name to our Roll Call and you’d get a snazzy flair to wear on your avatar.

Coming up the first part of next month we have a tale drawn from All Star Comics and later in the month I have a couple of holiday stories lined up. Hope to see you there!

The members here were well selected including different groups:

The group jells
Totally unlike
The original JSA title with:
Jack Knight
Queen Hippolyta
Future Android Hourman
Hawkgirl
Black Canary
As initial members
Later the too powerful Dr Fate
They were just
not good members
For the JSA.

In closing, I just have to say I love the artwork on this book. So much of the more modern comics has set that I just don’t like, but these issues were beautiful!

The members here were well selected including different groups:

Yeah, I really like this group. It had a nice mix of old and young characters which created a nice balance between the youthful enthusiasm of the young and the experience of the more mature heroes.

I loved both the idea and the execution!

Me too. Sometimes a writer has a great idea but the execution of that idea falls flat but not this time. I enjoyed every bit of this.

It was very cool when Wildcat’s son became a werecat. He put up a good fight

I thought he put up a good fight myself. The werecat bit surprised me a bit at the time but I still like it.

I like Cyclone a lot. I would have probably given up and not persevered.

I think the Cyclone parts were my favorites because she is so excited about the prospect of being a hero. I would have persevered as she did I think.

He seems to be the Starman from the Legion of Superheroes with memory issues.

Damage needs some therapy for sure. I like him and hope things improve for him as the story continues.

I do think he could benefit from therapy. He’s obviously got some issue to work out.

I think there are people willing to fight for justice. In real life, that doesn’t involve super heroics, but look at the people who risk their lives as firefighters and police officers every day.

My dad was one of them. He went out everyday and put his life at risk to protect others. It terrified my mother.

There are a lot of everyday heroes out there too.

There are lots ways to be a hero.

In closing, I just have to say I love the artwork on this book. So much of the more modern comics has set that I just don’t like, but these issues were beautiful!

I especially loved the artwork here.

I love the series, but not so much the first few issues.

I really love Englesham’s art. He does a great job at separating children from adults and facial expressions. The previous series had some issues where Star looks older than Power Girl.

“It was also during this series that the old JLA/JSA crossovers started back up. The first of these crossover stories happens just after the story we will be reading this week.”
I know there were a few from earlier like Virtue and Vice and the Thanksgiving issue. Do you mean they became more frequent?

Finally the good stuff. Vandal is an intimidating villain like always.

Vandal is a great villain IMHO. I never get tired of seeing him.

Props to Star for all the support she is giving

I loved seeing her take Cyclone under her wing. I only wish she had done the same with Damage who really could use it as well as a real friend.

I do love his opening banter with Mid-Nite and Stargirl

That was fun to read. I really liked him even if he seems a bit off kilter.

No. Picking him was just asking for trouble. He needs a really good friend, not membership

I agree he needs a good friend and some therapy to help him deal with his trama. I’m not really a big proponent of putting on a mask and fighting bad guys as a coping mechanism for dealing with your issues because it’s not really a healthy way of dealing with trauma. (I’m looking at you, Bruce Wayne.)

I really love Englesham’s art. He does a great job at separating children from adults and facial expressions.

I really love Englesham’s art too. I really hate it when artists make young characters look older than they should or when they make older ones look even older than they are.

Do you mean they became more frequent?

To start, I agree with @TurokSonOfStone1950. This is the better of the two Geoff Johns’ Justice Society runs. In fact, I think this might be my favorite era of the Justice Society. Johns improved on what he did the first time around and expanded it to include new pockets of the DC Universe that were previously untouched by the Justice Society.

I was thinking Wildcat is his ideal mentor. Both have anger issues, but Wildcat can teach (contrary to what he says), and maybe Damage could get part of his sense of humor.

I could totally see that, and Wildcat would be a great teacher. I think Wildcat will have his hands full with his own son, though.

What could happen? What are the odds something like say a wannabe god out to destroy the Earth turns Tommy and several younger members against the JSA?

lol, no… that could never happen…

I was thinking Wildcat is his ideal mentor. Both have anger issues, but Wildcat can teach (contrary to what he says), and maybe Damage could get part of his sense of humor.

I was thinking the same thing. I’m not sure Damage is in the right headspace for training though no matter who mentors him. I do think that Wildcat would be a good teacher though despite what he says.

What could happen? What are the odds something like say a wannabe god out to destroy the Earth turns Tommy and several younger members against the JSA?

Perish the thought. That could never ever happen…Oh wait…

. I like the fact that the JSA is recruiting the descendants of original members because I like seeing the torch being passed

I’m a big fan passing on the torch to the younger generation myself. I sometimes wish that torch could remain passed on in some cases but comics aren’t set up that way.

All in all, their massacre of the Heywood family reunion was pretty horrifying/disgusting.

It was at that. Pretty much what I’d expect from Vandal though and he was the one to orchestrate it.

The fact that an untrained young Wildcat had to last against him alone was good drama. So, yeah, great fight.

That was the exact reason I enjoyed the fight here. Lots of drama especially since young Wildcat is an unknown variable in the fight. Up until this point we have no idea of his skills or if he as powers and that makes for some interesting possibilities.

Yeah me too. Or at least I would after the fact anyway. I think the adrenalin rush would see me though the actual events but I’d crash hard soon after. That has actually happened to me in real life in certain situations.

I get feeling like that. If someone is going through that, the worst thing to do is leave them to their own devices.

I agree and it could be that Grant is attempting to reach out to someone on a subconscious level by trying to be a member of the team.

When I was choosing the [Legion Fan Club] reading for this month, I was highly tempted to do the Lightning Saga crossover since we’re currently doing a 30 year retrospective / quadruple layer sandwich reading. But since I follow both this club and @Vroom 's new Justice League club, I realized, when I was putting this Legion reading together a few days ago, that you both at the same time are featuring the 2006 versions of these and so I backed off.

Instead I used the 2014 Justice League United Legion story that took place after Legion was no longer published.

No offense, but I really hated the JLU-Legion crossover. It just dragged too long, and the deontology vs consequentialism was poorly done.

Maybe all three clubs can read and discuss Lightning Saga together at some point?

I sometimes wish that torch could remain passed on in some cases but comics aren’t set up that way.

In an interview, Grant Morrison said that the way he ended his Batman, Inc. series was inspired by that fact. He basically said that no one would really be Batman except Bruce Wayne because that’s the way the publishers set it up. Thinking about what happened to 5G (RIP), I’d have to say that he’s been right so far.

I agree and it could be that Grant is attempting to reach out to someone on a subconscious level by trying to be a member of the team.

Well, Grant keeps saying he’s more comfortable alone and is not interested in being a member, but… hey he could leave at any time if he wanted. I think, on some level, he needs the JSA.

This has my interest. I’ll probably read a couple issues today.

Maybe all three clubs can read and discuss Lightning Saga together at some point?

That would be great if @Don-El_52 and @Vroom are interested in doing so.