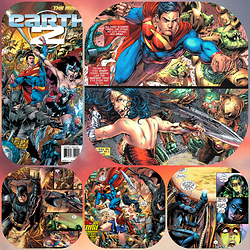 For those of you who have been following along we’ve been pretty much all over the map in this club and this month we’ve made our biggest leap yet into a new and rebooted DC landscape.

The N52 reboot changed a lot of things in the DC universe but it also brought about the return of the parallel earth concept. The old Earth-Two and its heroes, the JSA were retooled yet again and Earth 2 was born. (Yes. I know that the team never called itself the JSA officially but honestly they may as well have been called that.)

Let’s get this meeting started and see what awaits us in this brave new world.

(Just so you are aware the Earth 2 #0 issue was published between issues #4 and #5 but the events in it happen during the time of the Apokolips War.)

And that’s it for this week.

Next month: More JSA and The Huntress.

Flash to replace Wonder Woman, as his powers were given by a greek god

So the original had to go

Also the Teinity had offsprings

So they weren’t as needed

Later
Thomas Wayne and a Zod filled the shoes of Batman.and Superman

Kendra I liked but never thought of her as part of government. She was allied with Dr Fate from the beginning I thought

I’m going to get this done early. Earth 2 is an interesting series. I read these issues back when they first came out, but there was a lot I had forgotten/a lot I didn’t catch on to until now. There’s a lot that actually works in this series and a lot that doesn’t. Let’s get started:

There was a lot lost with hitting that reset button, don’t get me wrong. That being said, I think Robinson did a lot of good world building here. It also paid more homage to the Golden Age than it was given credit for. I also loved the parallels between Earth-2 and what was happening during the New 52. The New 52 Justice League starts by thwarting an invasion from Apokolips and Earth-2 shows you how that invasion can go really, really bad. Earth-2 was a better series than it’s generally given credit for.