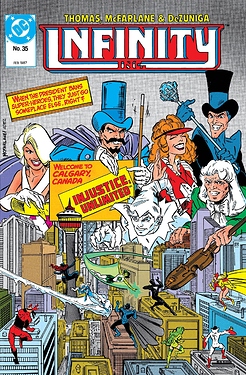 Hello all and we apologize for the delay with this week’s post . There was an unavoidable technical issue that is in the process of being resolved. Because of this both this discussion and the one for later this month will overlap weeks.

This week we will be continuing our exploration of Infinity, Inc. There’s a lot to unpack in these issues so let’s call this meeting to order shall we.

And that my friends is all for this week. I know it was a lot but also well worth the read.

I hope to see everyone back here for our next adventure as we explore early issues of All Star Squadron.

The timed bookmarks work like a charm for me. I have this one set for Saturday morning 8 a.m.

I look forward to hearing your thoughts on these issues.

Clocking in, love these timed bookmarks!

I’m going to miss them when DC Universe collapses into a black hole LOL.

Sorry about the one-on-one response @rosestindog.31947 , I was trying to hit the reply to everybody button.

Question 1: Which Infinity Inc member would you want to have the powers off to defeat which Injustice Society member? This brings up an important point: Unlike many other super teams, Infinity Inc doesn’t have anyone wildly powerful, either with outrageous strength or deadly power beams etc. The Injustice Society, especially once they reel in all of heir missing members, is more than a match for these young adults when you compare power, ability and …experience / skill! My first thought would be to pit Icicle against the radiation guy Rising Sun from Global Guardians.

Question 2. On helping the Injustice Society: I guess if a loved one’s life was at stake, I would notify the authorities secretly if possible and possibly do minor crime stuff until something good happened. rather than have them killed. 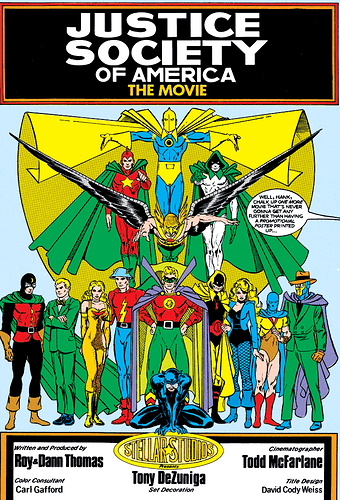 Other reflections on this issue:

This poster is super! It also shows why in the end a full JSA is the way to go, even if you just have the older super powerful original members only show up every several issues, in my opinion. This is some of the better McFarlane art in this issue for me. I was not a fan of his rendition of the Shade or the Wizard. I did however like The Fiddler: 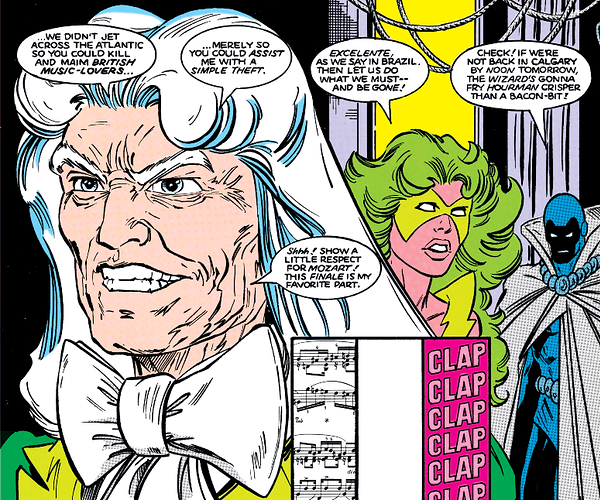 Of all the team ups, Wildcat with the Tasmanian Devil was pretty ingenious.

It was also great seeing Fire and Ice that would later be in the Justice League International. I seem to recall several the Global Guardians would show up as well, especially in Justice League Europe.

No worries about the direct response. I have hand twitches sometimes and inadvertently do the same thing.

This brings up an important point: Unlike many other super teams, Infinity Inc doesn’t have anyone wildly powerful, either with outrageous strength or deadly power beams

I think that’s why I enjoy these books so much. Well that and that the team members are allowed to make mistakes just like normal people do.

This poster is super!

I especially liked the poster. It was a nice bit of art and the layout was cool. Movie type posters really get my attention and this was very p exception.

His Fiddler was awesome.

For instance, if I were going to make a move on one of Injustice Unlimited, I would go after Icicle. I would use Fury’s powers to do it. When the hypnotized Icemaiden froze Fury in a solid block of ice, Fury was able to power out of it using her super strength in no time. I imagine the same thing would happen if Icicle froze Fury. You may ask, what if Icicle fires off an icicle at Fury (it’s in his name, after all)? My answer to that would be: Bullets and bracelets, pal. They may have taken the Amazon out of her backstory, but I doubt they truly took the Amazon out of Fury. Fury would have taken out Icicle before he was a real problem.

What would I have done in their place? I mean, I would have been on the lookout for an opening to turn the tables on Injustice Unlimited. That being said, I would prioritize my friends over some random dude’s Stradivarius. If I have to steal a violin to keep my friends safe, I’m stealing that violin. Wouldn’t lose much sleep over it, either.

Honestly, I wouldn’t have accepted the assignment to go get Solomon Grundy in the first place. That just sounds like a suicide mission. I’d probably tell him I’d do it, go hang out somewhere for a couple of hours, and then come back and tell The Wizard we just couldn’t find Grundy. If The Wizard did betray me, though, I’d get the rest of Injustice Unlimited to help me oust him as leader. I mean, why do we take orders from him, anyway? He’s just a hypnotist. … oh… right… He’s a HYPNOTIST.

However, one of my favorite tales concerning Solomon Grundy comes from Grant Morrison’s Seven Soldiers: Klarion the Witch Boy. In issue #1 of that series, it’s revealed that there are many Grundies and that these Grundies can retain some memories from their days as normal, mortal men (I don’t want to spoil too much, if you’ve never read it- you should). It could be that Grundy’s concern for Jade is like an echo of his former life. Maybe the “kindness” that Jade showed by retrieving him from the ice woke up something that remain of Cyrus Gold.

Or… maybe Grundy is just really simple and that was the only “kind” thing that he remembers anyone doing for him. Which is sad…

That being said… these things happen. Don’t get me wrong, I don’t believe that superheroes should just go around killing villains (the Punisher is NOT a hero). Realistically, though, being a superhero is a rough job. The Wizard and other villains like him would gladly kill you. There is a lot of combat and chaos in these life or death situations. Sometimes a superhero is going to kill a villain… these things happen. In fact, I remember calling Star-Spangled Kid out for killing Vulcan in our last discussion. It happens.

Rick was forced to take too much Miraclo to save himself and his friends from The Wizard and Injustice Unlimited. He was tweaking and not thinking straight. The Wizard threatened and almost killed Rick. I don’t think Hourman should spend too much time beating himself up over this one. Learn from the mistakes, move on.

The Cyrus Gold backstory in Grundy’s Infinity, Inc. tale was new to me. I have not read Solomon Grundy’s first appearance (it is not on DC Universe). However, this is Roy Thomas, so I feel safe in assuming that the Cyrus Gold backstory where he is the victim of a ruthless criminal is the orginal backstory from the Golden Age. In Seven Soldiers #0, Morrison gives two different possible backstories for Cyrus Gold: Either he was a wicked man who had it coming or the innocent victim of mob justice. I like a little ambiguity in my Solomon Grundy origins. The rest of Grundy’s story did track with a lot of what we learn of Grundies in Seven Soldiers: Klarion the Witch Boy. Grundies are beasts of burden that need to follow orders. In that light, it makes sense that Grundy is constantly following the commands of “criminal masterminds.” He, naturally, needs to follow orders. However, there is a special something you need to do in order to maintain control of a Grundy. This missing element may be why Solomon tends to turn on his masters… Still, you have to feel a little bad for Grundy. He is a walking swamp monster with very little will or imagination of his own.

I also felt for Norda. It can’t be easy to be born into two very alien cultures. I respect Norda a lot for wanting to forge his own path outside of his tribe. I am convinced his grandfather manipulated him back into the fold which I think is a tragedy.

As for Helix: Not guilty. What Dr. Love did to them was monstrous. They were never raised with any concept of law or society. How could they know what they were doing was wrong? Another tragic story. I’m hoping there is time to correct it, but… we’ll see…

I think Norda also got the short end of the deal here. As I mentioned earlier, I think Worla manipulated the situation to force Norda to accept his role in Feithera. I don’t see why Norda had to accept the priesthood of his people in order to stop the Eye of Ra. Also, it seems like Worla could’ve done it himself…

The last thing I’ll mention in conjunction to this is that there was a reference in issue #44 to The Blue Beetle defeating the Eye of Ra before. I thought to myself, “Knowing Roy Thomas, this is probably a reference to an actual story.” And it was! A story Roy Thomas wrote, in fact. In Charlton’s Blue Beetle #54 from Feb-March, 1966, the Dan Garrett archeologist Blue Beetle defeated the Eye of Horus (aka Eye of Ra) by uttering its true name and putting it back to sleep. One interesting thing from that story is The Eye of Ra feared the Blue Scarab that gave Dan his powers. Hec left behind a Silver Scarab when he died…

Anyway, that’s all from me for now. …Have you read Grant Morrison’s Seven Soldiers yet???

Have you read Grant Morrison’s Seven Soldiers yet???

Not yet. I’m not a big Morrison fan but because you have talked it up I may give it a go sometime soon.

I am, obviously, a Grant Morrison fanboy, but I get that he’s not everyone’s cup of tea. I love Seven Soldiers. It connects with a lot of Morrison’s other work, and it is sort of relevant to some of the characters we come across in the JSA book club.

Thanks for posting the reading order @TheCosmicMoth. It was very helpful.

Regarding the JSA movie poster, I believe it gave readers the first glimpse of the soon-to-be-introduced Golden Age Fury. 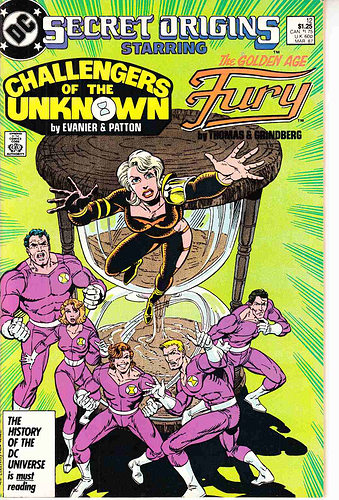