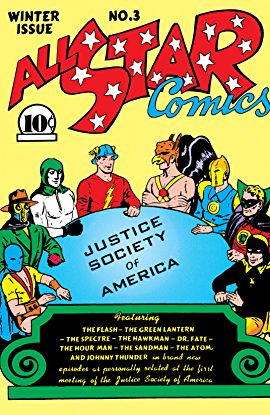 Hello fellow JSA fans and welcome to the first meeting of the JSA Book Club, where we will be reading about DC’s First Superhero Team. Before the JLA there was the JSA and the characters that made up the team are some of DC’s finest heroes to grace a comic book page.

And now for the Roll Call:

Let’s bring this meeting to order.

The Justice Society of America was DC’s first attempt at a team of heroes and this week we will be beginning at the start of the team with All Star Comics #3 and also we will cover the origins of one of its early members: Wonder Woman.

And that’s all for this week fellow JSA fans. Next week @Aurora will take the lead and we will be going forward in time to Infinity, Inc and their first storyline.

Also for ease of finding this topic please feel free to Bookmark it so that it will be listed in your bookmarks.

This meeting is adjourned!

As we will be reading the JSA stories in chronological order starting from the teams inception we, as the JSA Book Club leaders, feel the need to stress that some material from earlier times may contain attitudes, art or language that may not be in line with modern ideals of equality and acceptance. Please feel free to not read anything that makes you personally uncomfortable but also remember that some of the works read here are also products of the time period in which they were created. We say this not to excuse such attitudes and ideals but as a way of putting these works into their proper historical context.

Wow Comics were super fat back then, three times the size of what we have now!

I seem to remember seeing some actual Golden Age books among those I first discovered among my uncle’s other comics and thinking the same thing @Don-El_52. They were also seasonal as opposed to monthly. There is even an announcement in one of these issues about how the sales of All Star Comics have been so good they were going to be going bi-monthly with the next issue.

@Jay_Kay: I do find that I have to be in a certain mood to read anything from the Golden Age and that some stories read better than others as well.

Man you really got your money’s worth back then. Haven’t read these in awhile. I the only story from the meeting I remember is The Flash’s one with the shipwreck.

With comics back then being seasonal affairs you got a lot of story for your shiny dime. Then again a dime was a lot of money back then.

Yeah true, I was thinking more so the amount of dialog. Similar to how Wolfmans TT were packed with dialog in the 80’s compared to todays stuff. Might just be how I’m remembering it though, been awhile since I read these.

That’s certainly true. I suppose that’s why I always have this thought in the back of my mind that I should be getting more for 3.99 whenever I read a new comic.

yeah some folks like Loeb and Sale can execute it well with panels and art but a lot of issues today seem light.

And that is the A number one reason 99.9% of what I read is from unlimited digital sources that each come to something like $6 a month.

Reading through I just have to remember that certain parts of it are a product of their time. Outside of Wonder Woman most female characters back then were pretty much the damsel in distress or the girl friday type. I keep waiting for them to do more than just “be there.”

I keep waiting for the women here to do something too but as you point out these stories are just a product of their time.

Edit: Of course neither are entirely accurate portrayals of woman during WWII or even women in general. My Great-Grandmother owned her own business in the 1880’s and didn’t take lip from any man. She was also a doctor and divorced her husband because he was a drunkard who was violent.

My grandma during WWII worked in a factory during the day and came home every night to care for all the kids that stayed with her while their fathers were off to war. She had I believe four families staying with her during the war.

Both of them were strong women who became role models for the families kids.

I can say much the same for my grandma. She found out she was pregnant right after grandpa shipped out. She worked in a factory clear up until her due date. Actually she walked off the assembly line when she went into labor and her boss who wasn’t even aware she was pregnant apparently had a cow over it and fired her on the spot. Lots of grandmas were really tough characters especially back then, but the media rarely if ever portrayed women that way.

Going through All-Star Comics #3 right now, and one thought that strikes me with this is how this team is formed. Usually with these super teams, they’re often formed by being in the same place at the right time to stop some major calamity and our heroes decide that they work pretty well together and should stick together.

But here, arguably the first time such a team is formed, and how do they come together? At a hotel room with a nice spread, telling stories about some of their best exploits. It’s kind of surprising, but I guess it’s sort of in the name, isn’t it? The Justice Society. More than anything else this group was more meant to be a chance for people who often find themselves as loners being in the same room with someone just like them, to allow themselves to feel a little normal for once.

That was something that struck me as well but not in a bad way. I actually liked that the team here comes together from a place of calm and quiet, telling each other and readers about themselves while having a nice spread, rather than what is now the more generally accepted way teams are usually formed in a crisis of some sort. Made a nice change although things will be heating up fairly quickly.

This same individual story format is one that sticks around for a bit as well. The JSA are a team however the writer is doing a lot of experimenting I think trying to find the best way to tell their story. Since early on the book was basically a seasonal one it was treated more like an anthology of sorts rather than then telling what became the more tradition sort of stories we see these days in which an entire team off together fighting some foe or other. The JSA didn’t start out doing that at all.

So, some initial reactions to the first issue, the Flash storyline.

The concept of the Flash being underwater is an intriguing one. Normally we just see Flash running on top of water, but what would his extraordinary speed abilities play out like 50 feet under water? I would enjoy seeing the science of this explored more in a modern day adventure. 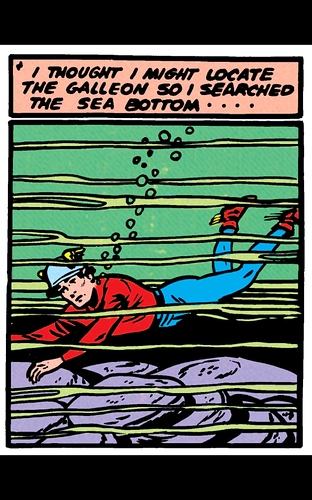 @nu52 (and others who have inquired concerning my utterance “mommie”): see, even Sharks naturally cry out to their Mommies when under duress: 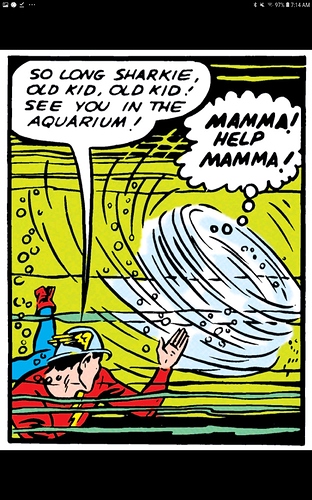 Circa 1940 / 1941, even with phone use fairly widespread, telegrams were still being sent from distant lands! Anyone receive a telegram lately while enjoying an evening at the club? 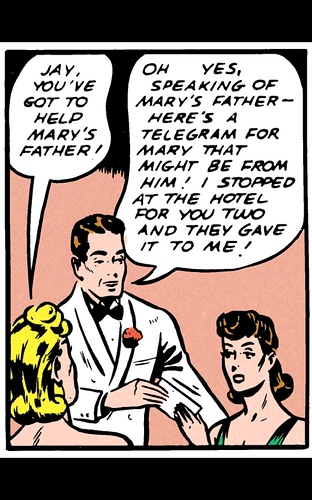 Last observation for now- this first issue truly is an anthology, much like those Walmart 100 page giants of today- look at the dramatic difference in art style for the next story that features Hawkman, much more realistic with fine details: 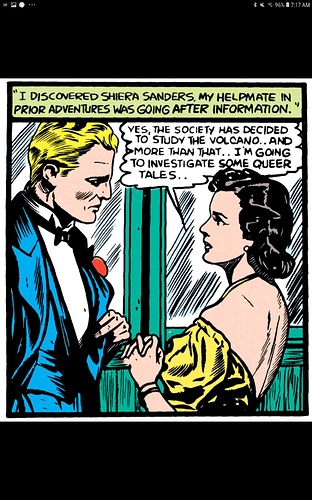 I’m so going to use that the next time I read some fan-fic.

Golden Age stories are full of such strange turns of phrase and can be an interesting study in how word meanings have shifted over time. They can also be a chore to get through.

This may not have been the best way to start off this club. Ah well you live and you learn. Next time we will be covering the introduction of Infinity, Inc and after that will be the Silver Age reintroduction of the JSA.