I’m very uncomfortable with the thought of Jon having a romantic relationship of any sort. His aging was so forced and unnatural, and now this. 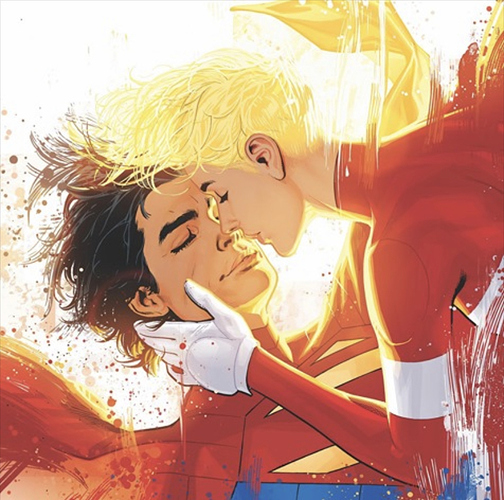 To me, Jon is still the kid calling Lois “Bat-Mom.” 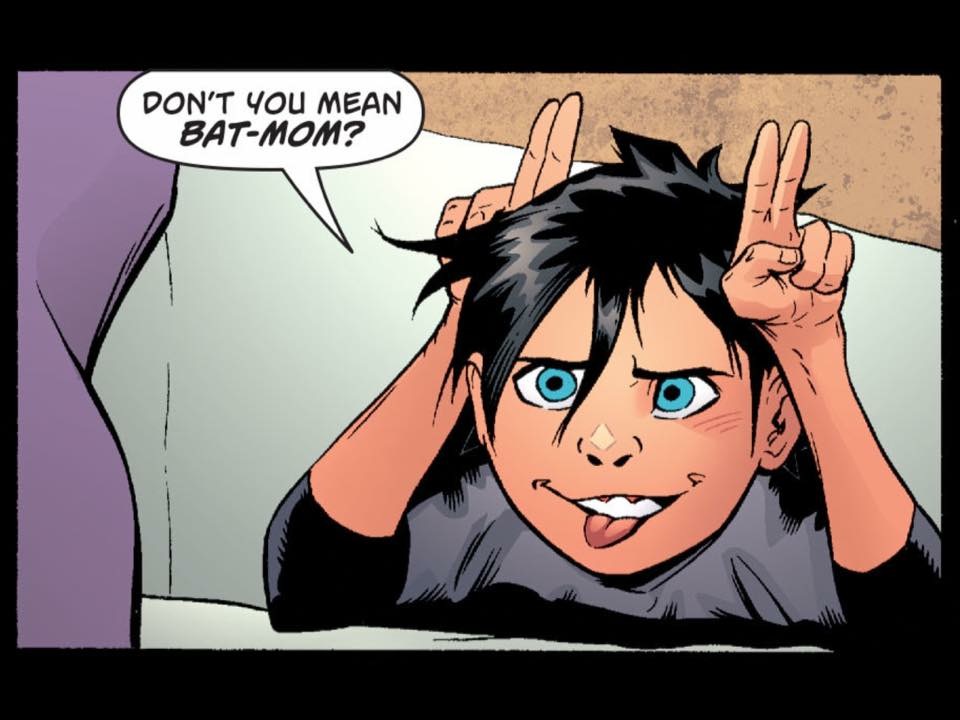 I’m wondering if anyone else feels the same. Like, that new cover makes me sick to my stomach, honestly.

Not reading anymore so can only go by the picture. Given that he aged alone in a volcano, he hasn’t aquired the emotional maturity of his age, so my opinion is that it isn’t entirely unproblematic, but I do lack context and a bit of history so I don’t know for sure.

I’d say that it’s probably weirder that he is treading on his dad’s old hunting grounds.

From what I gather, Clark was never even in the Legion now. Now, Jon is the “One True Superman,” who created the United Planets Federation. Clark is only the guy, who slept with Superman’s mom now.

Yeah, the continuity is a mess. The Doomsday Clock Legion retcon did not do much to make it better. DC has however said that all comics are canon, but we will have to wait for DC to post their new timeline to see how the old legion comics fit into that.

I just really want Jon back as I know him. All Super Sons fans that I know of want him back the way we knew him, and that was not a low selling title. Bendis has openly admitted that he aged Jon, because he wanted to. It was not an editorial mandate. I don’t understand why editorial allowed it, consider Super Sons was selling so well, and they had to have known it would’ve caused a lot of backlash. Sadly, I think the Jon I know is gone to us forever.

I mean, even other writers and artists hate what Bendis did. Every time Jon shows up anywhere else, it’s a memory, a flashback, or a different universe, where he’s still the kid everyone knows. If that doesn’t say something about how disliked this change, I don’t know what will.

There is one romantic relationship I could buy which is Damian+Jonathan but i dont know if I want to see that side of them explored yet. Also I am not buying this relationship at all. It makes VERY little sense

It makes loads of sense. Their fathers are friends and so are they. Or they used to be until Bendis broke up the dream team. I don’t think I want to see them in a relationship with each other. For one thing, they’re just children. For another, I don’t think they’re going to age Damian any time soon after the failure that was Jon Kent.
But I really haven’t liked the way Bendis has treated the Super Sons. He is constantly walking all over it. Especially when he gets LoSH members to call Damian ”Little (insert evil German dictator name here)”. Not sure if that name is banned. He got lazy and aged up Jon, he also treats Damian like garbage, and now he has thrown away one of Superman’s most unique aspects.
There is no way for people to treat Superman like a regular guy anymore. That was the entire premise of a secret identity. It made Superman seem more humble. But that’s gone now and I think they might try to do the same to Batman as well.

@Behemoth It’s a surname. I don’t think it’s used a lot today. Most people changed their name after WW2.
Don’t think it can be banned though.

Anyway, that’s in poor taste. Bendis wrote that in Legion?

Yes he did, when Damian visits the future. 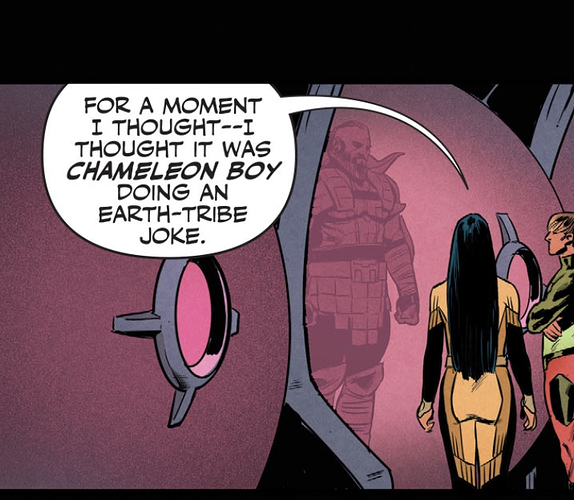 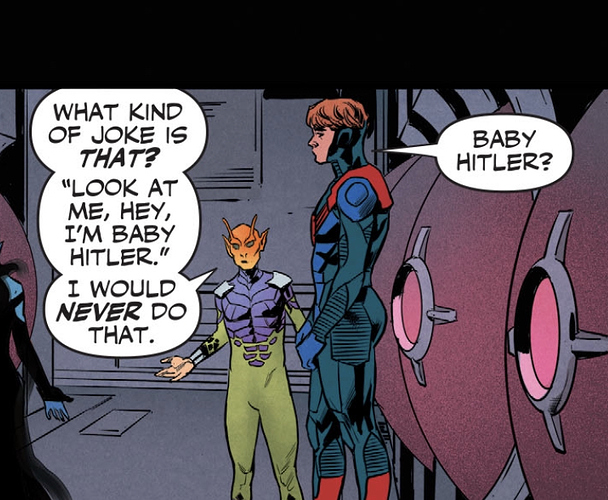 Apparently, it’s the most likely outcome of some timeline the Legion keeps talking about.

I miss Super Sons so much. I just started rereading it and their friendship is such a nice thing to see. They helped to change each other in a way that seemed natural and reflected personal growth that comes from true friendship. And most of all, it was fun. Jon’s smile and enthusiasm in that book is contagious.
I will not read anything Bendis does with Superman (tried it and didn’t like) so I don’t know anything about the context of his LoSH relationship but I’m sure when Bendis is done someone will bring young Jon back. And depending on how far he gets in terms of intimacy, that will be WEIRD. Like the end of Big. He has a full adult relationship and then goes back to being a kid. That’s gotta mess with your mind.
From another post, I was wondering if they would go with a Jon/Damian pairing in the DCeased sequel but the vibe didn’t seem to go anywhere. I’m sure it would be met with a lot of anger and protest. In an Elseworlds type setting fine but I want the regular continuity friendship back.
I don’t normally like this plot device but I’m really hoping this Jon is a clone or something. Just end it without Jon having to go through trauma and let him be a kid. DC always claims a return to hopefulness but has done nothing with it.

Deage Jon
Restore the Supersons
Kara gets the Legion back from Jon.

Supergirl fans love Kara in the Legion. She has her love there.
Jon fans love him with Damian. He has his best friend there.

With DC going too dark for Kara, she could live in a brighter future heroing around with other teenagers who have a clubhouse.

I’m all for pressing the “go back”-button.

I’d rather Jon and Damian just go back to being kids in Super Sons. We already have teenage Supers and former Robins running around with relationship and teen/young adult drama potential.

edit: As for the picture, I think Jon looks older than a teenager and older than the other person. I thought Jon naturally aged to his current state, so I do view this differently than a Big or Shazam type situation, even if we didn’t get to see any of his growth. However, as I mention above, I’d prefer Jon go back to being a kid.

I see a lot of people mentioning a Jon/Damian relationship. That would be forced. Damian has never shown any interest in guys in that way at all… Like, ever. In his entire existence… But he has shown interest in girls, from his little childhood crush on Steph to full blown trying to kiss that girl in Teen Titans, but getting rejected. He’s always shown straight tendencies. Jon… Maybe, he could go either way, but he has his thing with Katy, and then this thing here, which I hate, so that’s pretty much confirmation that he’s straight. I like them as close friends anyway. A romantic relationship, for Jon, makes me uncomfortable. He was a ten year old, and that’s what I still see every time somebody mentions him. He should be more worried about getting to the next level of Monk E Monsters than what he’s going to do on his next date. They waited until Damian was 13 to start seriously exploring romance for him, and that’s the right move. That’s when it normally starts. That, and Damian is very mentally and emotionally mature, so a relationship for him doesn’t feel as… Disturbing. If we got Jon back… Like just retcon everything Bendis, he should just be a kid worrying about kid things, until he gets up to that 13-14 range. Then, explore that side of him. That’s my 2¢.

My thought above is I want the friends back as children without romance because it just doesn’t matter.
When mature, I’m fine if a writer explored something but I don’t advocate either. That’s what I was trying to say. Just in case.

Yeah, I agree on wanting to see the fun, kid-side of these two characters. I like their best friends antics in Super Sons and the few other crossovers I’ve read. I actually think Damian aged too quickly too. I liked him more firmly on the kid side, although his enthusiasm and arrogance over turning 13 (finally a teen for the Teen Titans!) was amusing.

As for romantic inclinations, I’ve seen Damian specifically show interest in girls, but haven’t really seen anything definitive from Jon before this picture. However, I also don’t reliably follow their separate adventures (Teen Titans, Superman, Legion) and have read very little with teen Jon in it.

Since Jon did actually age at a normal pace from his experience (and how I interpreted the explanation), is the main concern for a Jon romance based on the ‘what if’ scenario of him reverting to a kid, or just that the age jump for readers (and some creators, as mentioned) can be jarring, since Jon pretty much grew up overnight and in a pseudo-vacuum from our POV?

A the only way to deage Jon is either a retcon, or this Jon isn’t really Jon.

For the record, I don’t think Jon and Damian should be a romantic pair yet. It would be cool to see it in 3-4 more years assuming they figure out the 4 year age gap.

Damian has shown interest for girls but could be bisexual. He’s certainly at times seems happiest and most open, honest, and warm around Jon. Jon has never had one until this photo, but you could easily figure out a way around that.

The solution that won’t happen, but should is that Death Metal rewrites the universe resulting in Jon being de-aged.