I could not contain my opinion any longer, nor was I sure where to share my opinion, so I am creating a thread here on it.

What do people think about the cover of Joker Bronze Age Omnibus?

I dislike it because instead of the “branded” colored-themed, Age-specific cover designs, this cover went in its own direction. Since it’s art, it’s open to interpretation, but when I see the cover design, where Joker is holding a playing card and gun, with spotlights in the background, it seems to appear as Joker is not an evil person, or his villainy is accepted. I have a hard time looking at the cover, and not thinking that mayhem and anarchy are being “condoned” on the cover.

I hope if there is a reprint, the cover art goes back to the format that was originally intended, and follows the same design as the rest of the Bronze Age Omnibuses.

I don’t see the below as condoning Joker. It’s just him in his trenchcoat looking quite off-putting.

If anything, his face reminds me of the shower clown from The Brave Little Toaster. 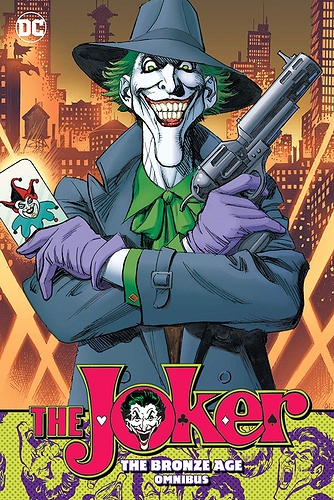 I think you might be reading too much into it. It’s a creepy clown with soulless eyes holding a gun – that’s not going to look heroic to literally 99% of the human (and possibly small animal) population.

Also, I don’t know how they could further sell his villainy without getting controversial and considered exploitive, much like the Batgirl cover from a couple of years back. 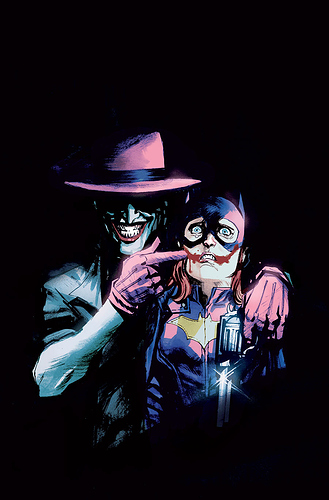 I don’t have a problem with the cover per se, but I have wondered if the glorification of villains is a problem. I’m still trying to figure it out, but it strikes me as a little strange to give your kids sneakers, shirts, and backpacks glorifying a mass murdering sociopath. If Hitler were a cartoon character, would you want your kid to wear his sneakers? The other part of me thinks I’m overthinking it and that even kids get these characters aren’t role models.

Something to consider considering I guess.

@BatWatch – I get what you’re saying, but I think a big difference between Joker and Hitler is that Joker (and a lot of villains who get shirt treatments like Thanos or Venom) is a fictional character, none of the atrocities he’s done on the printed page or big/small screen ever happened in real life.

There’s nothing to read on a cover, so I am not reading too much into it. But, with the orange background, I initially thought Gotham was on fire. While upon further inspection, I see that it is spotlights, and with Vroom showing the picture, I see a very tiny Batman, I still think that the original design would have shown more neutralism. Taking more space, and being the first of the main Bronze Age Omnibuses to receive a new look, my opinion is that DC is showing Joker’s appeal. I may be wrong, but that’s why it’s an opinion- not fact.

Oh yeah, reality vs fiction is a giant distinction, but again if Hitler were a fictional character from a hugely popular movie series called World War II, would you want your kid to have a Hitler backpack? It’s kind of weird, right?