Joker 2 – Todd Phillips Back As Co-writer 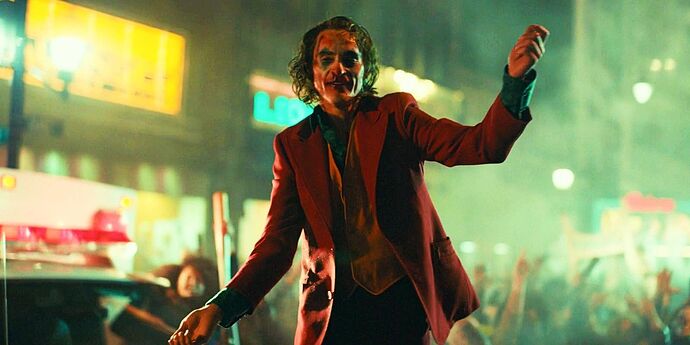 My fortune teller says this is a joke. He is actually hiding in the writers’ room and sabotaging them.

Hope he’ll look more like The Joker with less Ronald McDonald appearance in the next movie.
Anytime when I think of the Subway scene where he chase the guy, I see a scary Ronald McDonald clown!

Hmm. I wonder which Scorsese films they’ll ape this time? I’m thinking Cape Fear with a dash of Gangs of New York.

Hope he’ll look more like The Joker with less Ronald McDonald appearance in the next movie.

This made me spit my coffee. Spot on

I liked the first one ok, just ok. Not really my cup o’ tea, so this news didn’t really excite me… will probably watch when it’s streaming somewheres.

Good for those that are looking forward to it though.

I wonder why it didn’t link to the original article report?

Wasn’t trying to link to anything, but the one in the original post seems to be working ok.

I figure he’ll be back to direct, but I’m more interested in seeing whether this will be a direct sequel or more of an anthology series. I’m guessing it’ll end up being more of the latter since I still don’t expect Phoenix to be back. He’s never once reprised a film role, and I figure he probably took the original role because there was no obligation to return. Granted, there’s always a 1st time for everything, but I’m still thinking this’ll be something set in the same continuity but w/ a different character continuing the “Joker” legacy

An anthology series is interesting - I like that idea. I feel like this will be a sequel with Joaquin returning to play Arthur again but we’ll see.

Happy for fans of the movie, but I’m not super interested. I think Todd Phillips’ reasoning for making the first film was a little weird and a lot of the story and direction felt messy. I just don’t think he’s suited for this kind of film. I’d prefer someone with a history in mental health in this nature to be involved as they’re more likely to take a grounded and respectful approach to the content. I don’t know. Maybe Max Bemis would be an option since he has bipolar disorder and is an established comic writer at this point. I don’t know, that’s just my thoughts.

Happy for fans of the movie,

Okay, I like this sentence a lot. I wish more people could say this and keep this in mind, y’know?

I’d say I’m not sure a “Joker 2” is really necessary, but then I thought same thing about the first one and it was a really solid flick, so I’ll give it the benefit of the doubt.

It’s funny people are suggesting an anthology series, because when Joker was first announced I thought a better way to do a “Joker origin story” would be an anthology film with multiple actors and maybe even multiple directors with different stories and interpretations of the character – really highlight the “multiple choice” aspect of the character. Like a good example of this would be “I’m Not There” which stared the likes of Christian Bale, Heath Ledger and Cate Blanchett as Bob Dylan.

Nothing is “necessary” or “needed”. It’s entertainment and the first movie was very well received, made a ton of money and even won an Academy Award! Hollywood makes sequels when movies do that well and I’m happy to have this one in production. I enjoyed the first one a lot and am looking forward to seeing where the story goes from here.

Not seeing the point to it

I think they’d just make it a different villain if they weren’t getting Phoenix back. Hopefully the fact that it took 1.5 years to even sign him means that they are not just accepting any old plot he comes up with. For example, some say that the Joker is not actually supposed to be a sympathetic character.

The whole “he’s not supposed to be a sympathetic character” thing never makes sense to me. Of course not, what he does is horrid, but he’s also the main character and the point is not so much to root for him as to at least understand him. Hannibal Lecter, Tony Soprano, Cruella, The Professional, The Usual Suspects, The Godfather, Good Fellas, Pulp Fiction…there are a lot of celebrated movies/shows where the main character is an awful person doing awful things. Joker is one of them, absolutely, but it’s still a very well made movie. The Joker is one of the most notorious villains in American fiction and we’ll always be intrigued with how he got the way he got and why he does the things he does.

This is not directed at you, or anyone in particular, but rather the criticism of Joker in general that it makes Arthur Fleck a sympathetic character.

Your views are valid. It’s a well made movie. However, for me, call me naive or simplistic, but I like to see good triumph over evil in comic book movies. Joker didn’t quite offer that. Also hardly anyone was likable in the movie. I just found it to be… depressing. Depressing doesn’t equal “bad movie” in my mind, just not my cup o’ tea. The movies you mentioned are celebrated yeah, but I hardly feel the urge to rewatch them. Just not a genre that I go to frequently. That’s why Joker is not high up on my list.

Gotta say I absolutely loved the first film - probably my favorite DC movie, ngl. They went to great lengths so that we could understand the Joker and his motives (at least this version of him). It really… helps you understand the darkness in the world - the darkness that’s inside men. As someone who understands darkness, I appreciate the way this film was made. I’ll be pleased if it’s similar to the first one!

What, does he escape the asylum or go on a murderous rampage in said asylum?

As someone who understands darkness

I joke. Sorry… couldn’t help it