Jewish Heroes Of The DCU 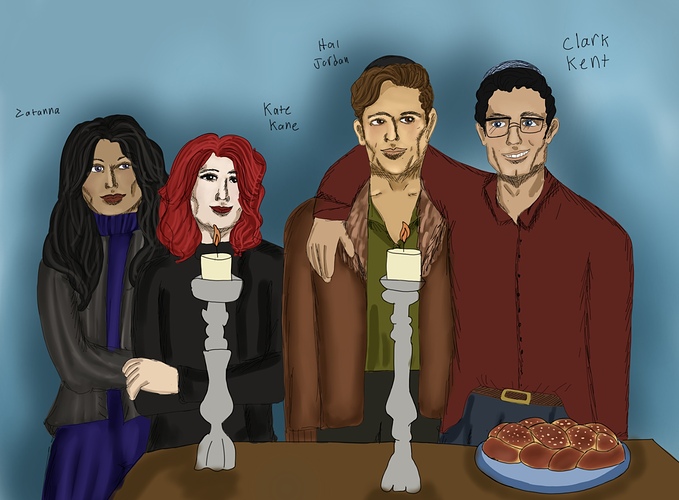 Oh I forgot about him

Not to mention Golden Age The Atom

Zatanna is h-word - magi (seriously, DC - you come up with a terminology that you publish in the comics and decided it can’t be typed without your website forums?) and her history, with Sindella likely being Romani and Zatarra being Italian, I’m not sure where she’s ever identified as Jewish? Likewise, not sure about your inclusion of Clark; Krypton had religions and if he was raised in something by Jonathan and Martha, it was more likely some Protestant/Methodist or similar strain of non-Catholic Christianity that predominates in the mid-west and, in particular, in the farmlands.

However, Morgan Edge is Jewish. Also: Professor Martin Stein (e.g. one half of Firestorm); the Eric and Linda Strauss version(s) of Dr. Fate - Doctor Fate (1987-) #1; Irwin Schwab, the Ambush Bug; and I was unaware that Paul Levitz declared Gim Allon/Colossal Boy twenty years after Jerry had created him in the Silver Age. There are likely more.

Hey you actually are allowed to say “hell” on here…

No, the site corrected me when I used a very specific term - which DC Comics itself came up with and has used in animated stuff and plenty of comic books, which is a term for a genus word made up to refer to naturally occurring native magical beings who share genetic material with non-magical humans on DC’s Earth.

I’m not sure where she’s ever identified as Jewish?

Her father is confirmed to be Jewish in DC Bombshells

Likewise, not sure about your inclusion of Clark;

I know CANONICALLY Clark is probably a Methodist, but

But Bombshell’s is itself an AU. It’s like saying Clark is a communist because he was the head of the party in Red Son, or a member of the Nazi party because he was one in Mastermen The Multiversity: Mastermen #1

Oh, and I definitely agree with you that Clark shares a lot with Jerry and Joe’s Hebrew heritage and he would definitely be an ally at any such celebration with people who are Jewish (e.g. Kate and Hal, etc.).

Okay fair enough. I still wanted to draw her