Na, haters lost this one…

Snyder’s MOS and BVS and Ayers’ SS were an order of magnitude worse than Batman & Robin and Steel; at least the directors of those never insulted their critics. There’s no reason to watch those films. They’re bad movies and bad DC adaptations.

Yeah, cause that’s what makes a movie enjoyable, the directors interaction with critics. Weird that all these superior films had no fan movement for continuation. You must be one of those “my opinion is fact” people…gross

I’m not. The way I see it though, Snyder and the Snyder cut is doing long-term damage to the DC brand and just when the ship seems to be righting itself with WW and Shazam and (fingers crossed) The Flash and The Batman.

The thing about an actual music video is that it’s brief. It’s about 4 minutes and doesn’t wear out its welcome. Suicide Squad was two hours of that.

Well, you’ll be hard pressed to find me defend SS. All I’ll say is if you watch any of Ayers other films they are nothing like SS. It’s common knowledge now that the film was re-cut by by the studio and Ayer had a different idea, and I would love to see it.
For me, saying MoS is doing longterm damage to DC is like saying Burton ruined Batman because he didnt stick with the 66 tv show that everyone was familiar with. But many comics fans saw it as a return to form for the character, returning to his dark roots.
As a comic book fan since the 80s, I see MoS as a return to form to Superman’s sci-fi roots. The Reeve era was far more damaging in my eyes, because now people think the only tone Superman should be portrayed in is fun and campy, which were never really selling points for me as a comic reader. I never picked up a Superman comic to see him save cats from trees and deliver public service announcements about public transportation. I like MoS because it is FAR more in line with Superman in comics, in my view, than any other live action or tv/cartoon series.

Sorry if I misjudged you, but your comment wasnt exactly dripping with unbiased sentiment…

Eh, I have strong opinions and I stand by them (as opinion- not fact). I still think Snyder is overwhelmingly a bad filmmaker (though a good action director) and an especially poor fit for telling a Superman story. Superman doesn’t have to be the Reeves Superman, but at the very least he should be a sincere, optimistic, and altruistic hero. If you make Superman dark and brooding- especially in a series you’re going to include Batman in- I feel you’re going to miss what makes the two such good foils for one another. I can see that they sort of shifted that role to Wonder Woman, which is fine and in line with Diana as I understand her.

Ultimately the Donner films don’t play much in my formative knowledge of Superman; I’ve only ever seen the first one, once, about 15 years ago. I also didn’t read a Superman comic until I was probably in my 20’s (and still haven’t read much- the only real story I’ve finished reading is Byrne’s Man of Steel) my chief exposure to the character until then was through the old Max Fleischer cartoons that I had on a VHS tape as a kid. My own iconic image of Superman is always going to be him pulling a train up a mountain to prevent it from running off the rails.

I can’t claim to be an expert on Superman, but I do know I didn’t enjoy Man of Steel for the same reason I tend to not enjoy most Snyder films- it’s very dour, joyless, and Snyder himself seems to think his work is far more important and clever than it is. Schumacher got lambasted for B&R (which itself I think got too much hate, despite it not being a great movie) but his track record as a filmmaker was much better than Snyder’s IMO.

I for one have complete faith on his vision. Snyder loves redemption. It’s a powerful theme that seem to really jive w this JL . If he wants to bring in who ever and write in what ever as long as it fits w the tone and style of MOS and BVS I’m elated

I wouldn’t be surprised if Leto was being added to what was originally the post credits scene on the yacht as part of the Injustice League, with maybe a couple small moments peppered throughout the film to establish the character for viewers unfamiliar with Suicide Squad.

I think there’s plenty of good reasons to think Leto’s Joker is a totally reasonable portrayal of the character. But I still don’t think he should be allowed back to play him. Leto himself seems to be a real creep. He mailed Margot Robbie a live rat to freak her out.

Weird, I see Man of Steel as the Max Fleischer version. A man of action and decisiveness, but still fallible and makes mistakes. Clark isnt a wimpy dork in those cartoons either, and I never got a sense of optimism, hope, or any of the other descriptors you used as those particular traits didnt become synonymous with the character until later. The House of El symbol was still just an S for example.
I’ve always taken issue with the narrative that MoS is “grimdark” like, compared to children’s cartoon? Sure. Compared to Superman in the comics? Not really. Especially Byrne era. That is the version that most heavily influenced MoS, along with Birthright.
It just goes to show, all these things hit fans differently. The Max Fleischer cartoons are some of my favorites too, mainly because they arent hamstrung by the Comics Code Authority and Superman doesnt act overly jovial or preachy, hes just a man. Clark isnt particularly dorky and doesn’t act like a wimp to throw people off, he’s just an average man.
I’m not an expert on the character either, but I’m definitely not a casual fan. It’s just weird that you passionate about trashing a director for the way he handles a character you have such a mild connection with and minimal exposure to.
Either way, I cant wait to see Leto get a second chance

To be perfectly fair I’ve been trashing Zack Snyder since at least Watchmen. In hindsight I’m not sure why, but I guess his style bothers me enough that it got me to defend Watchmen, which I consider to be historically important but massively overrated as an actual work.

But it’s all pretty relative. A lot of people take issue with some of the changes in the Burton Batman films- they’re my favorite Batman films yet put to screen and I think they reflect a very Golden Age version of Batman. And my issues with MoS I think, more come down to just not liking Snyder’s style or tone, it’s not like Birds of Prey where the directors and producers didn’t realize making a BoP without Barbara Gordon as its core is an insultingly bad idea, especially when replacing her with Harley Quinn (I’m going to be salty over this till the end of time, or at least until there’s a proper BoP adaptation that isn’t a wannabe Deadpool movie and does not include Harley in any capacity).

Superman stories in comics are always a little hard for me to follow since I know the basic idea of the character but so much of his extended cast and things about Kryptonian society/history, I’m utterly confused by. And that’s before getting to the New Gods stuff (which I know is more a greater scope threat but I always think of Darkseid as a Superman villain, accurately or not) which I can never seem to understand.

I guess the thing about Superman is; I have a certain set of assumptions, though they’re probably not that accurate. I like the idea of the character but struggle to actually read his stories. I think I have a hard time wrapping my mind around the more out-there sci fi stuff at my age. I find similar issues reading Green Lantern, and find myself tending more toward the more grounded feeling Bat-family and Green Arrow and the more straight up fantasy in WW and Aquaman (I’d never read Aquaman until this year, but the Giffen and David runs are really great. Giffen in particular has a really good Flash Gordon feel to it.).

There are a depressing number of people that have only been exposed to film and TV that think Robin is always either a “Holy x!” spouting 60’s Burt Ward or a petulant 90’s Chris O’Donnell (no disrespect to their actors) and if they know his name at all, it’s Dick Grayson and they only know him as Robin, not Nightwing.

I agree that’s a good possibility, but it would be a somewhat wasted use of the Joker. And you’d hope Leto would want more than 4 lines to return to playing the role 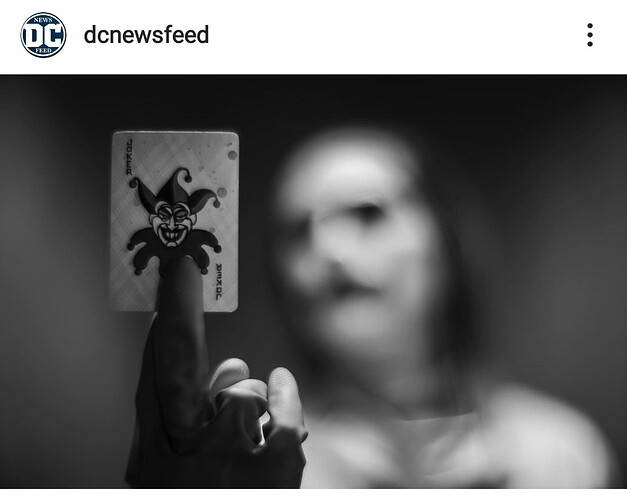 I never liked his Joker, with his appearance in the movie it is going to make this movie a lot more worst then it already is. Sorry for my harsh comment but that’s my opinion.
I’ll still give this movie a chance, depends on how much Darkseid is use and lot less Joker.

Obviously I have no idea what Leto as Joker’s place is in this film but I’m gonna’ at least give this imagery a thumbs way up for using a comics correct version of the Clown Prince’s calling card. Very cool.

Thx for posting this @TheTerrificToyman.

I don’t know about the rest of you but I am curious to see how Leto’s Joker is going to be, because this is Snyder working with him, not Ayer. If his Joker looks the same as last time, at least we’ll have more than a few lines that will give us an idea on how this version works with… well, this earth that they are on (remember, different earths = differences of characters). If this Joker is a bit different, then good for them for learning about what people don’t like about Ayer’s version. Either way, I think he at least deserves another chance to either impress us, or piss us off. Popcorn will be eaten either way.

Popcorn will be eaten either way.