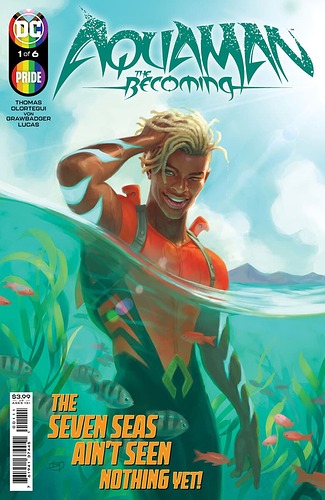 Jackson Hyde finally has it all. Mentors who support him, a community that loves him, an honest relationship with his mother, a cute new guy in Amnesty Bay who’s caught his eye, and access to Aquaman’s private training facility in Atlantis. Well, he had it all—until that training facility and half of the Atlantean palace got blown to kingdom come with Jackson in them. Now Jackson stands accused of wrecking the life he worked so hard to build. Aqualad’s going to need all of his skills, wit, and cunning just to prove his own innocence, let alone graduate from sidekick to Aquaman!

Written by Brandon Thomas ( Future State: Aquaman ) and drawn by Diego Olortegui, along with artists Wade von Grawbadger, Scott Koblish, Skylar Patridge and Adriano Lucas, Aquaman: The Becoming is a six-issue miniseries that will shine the spotlight on the DC Universe’s newest Aqualad for the very first time! Take a look into the first issue and, to be sure you get a copy at launch, preorder Aquaman: The Becoming from your local comic shop before August 29! Aquaman: The Becoming #1 arrives wherever comic books are sold on September 21.

For a sneak peek and more info on Aquaman: The Becoming, head over to DC Comics!

Are you excited for the next Aquaman tale? Let us know in the comments!

This looks really good! I can’t wait to read it!

Anyone else noticing that Jackson looks strikingly similar to Lil Nas X on this cover? Not complaining since I’m a fan of his music. Just trying to decide if it’s a purposeful nod to him or just my eyes deceiving me.

This is an interesting one – is this the fastest we’ve seen a sidekick character take on the legacy in continuity? It just feels weird.

It’s also odd to see his mom be so supportive of both his superheroing and his sexuality – as I recall, she was pretty homophobic as hell in Rebirth #1. Of course people can change, I just don’t remember her being seen after that point.

Don’t get it twisted, I’m definitely giving this a shot and going to keep an open mind. It just feels like a sudden left turn to me.

I kinda see it

I can see some resemblance - good eye.

I, too, see this now that you point it out.

is this the fastest we’ve seen a sidekick character take on the legacy in continuity?

I see a little Chris Pine in this guy’s look. Not as familiar with Lil Nas X but I know a young Steve Trevor when I see one!

I’m definitely getting this and in fact have already ordered the 1:25 variant cover from my LCS as well as the Black Manta 1:25 variant as they go together. 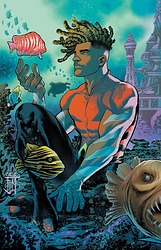 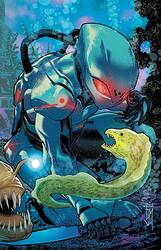 Edit: He doesn’t look at all like Chris Pine on the variant cover but his eyes, smile and hair color in the original post make me think of Chris Pine/Steve Trevor.