Is the Bat Family too big?

Yes absolutely. Too many side kicks water down an excellent soup. Honestly, I’d be fine if the “family” was scrapped entirely. I always like it when it’s just Bruce, Alfred, and Gordon. Those are Bruce’s best allies.

At the least it needs to be cut down to the core group.

Kill off Spoiler, and Signal. (Note: I don’t know if Harper Roe is still alive, but if so kill her off to)

Keep Azrael in space, Catwoman in another city, and keep Red Hood an Outlaw

Relocate Batwoman and Batwing to Bludhaven.

Change Cassandra from Orphan to Batgirl after putting Barbara Gordon back in a wheelchair, so she could be Oracle again. From there she can run the Birds of Prey.

Leave Nightwing and Robin in Gotham, however, have Dick expand the Titans to include Teen Titans Damian can be more of a partner and the two can operate the now larger team.

Have Red Robin head up the outsiders and operate globally as a covert team.

After all that it would be a team of four in Gotham with support via an Oracle and an Alfred.

I think that it’s pretty good, but at the same time it is pretty big

Honestly, I kinda only count the 4 Robins because they actually like worked worked with him, if you know what I mean.

Babs is ok but you can’t just add yourself in like she did. I dont care if Gordon is her dad. Granted she’s earned her spot over the years. She’s in. Batwoman did it too, where she shoves herself in but she doesn’t count. Batwing too.

Azrael is barely in there. “We are Robin” was the dumbest thing ever. I dont count Duke.

Spolier is cool but she’s not really ever around.

Orphan or Cass is cool and she’s actually been adopted by Bruce so I count her.

Basically if you’re adopted or a full time Robin they count. Dick, Tim, and Cass were adopted. Damian is his actual kid. Jason was a Robin

In the Rebirth run after Batwoman shoots Clayface, I count Babs and the Robins at the meeting in the Cave. Cass should be there too.

Here are some other Bat Family members from various iterations of the DCU (pre-Crisis, post-Crisis, etc.: 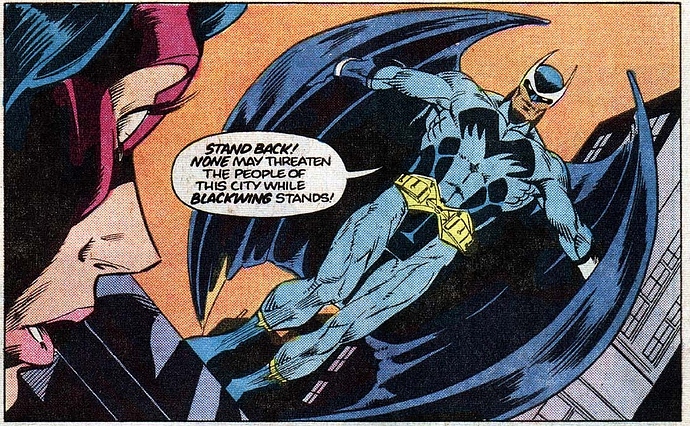 Brilliant deduction. Magnificent 7 is unreal. Shane my all time favorite western but High Noon & Butch Cassidy & any Eastwood western. If u include Blazing Saddles it’s over. Off topic Lone Ranger also incredible. Back to the post tho, your fingers on the pulse of how a show/comic materializes. Bravo.