Supercorp (supergirl and Lena Luthor) seems like the fan favorite ship on Supergirl. We haven’t seen her with anyone in awhile romantically but she’s focused on her family and friends. Her relationship with Lena has become so strong that the friends to more trope is very believable. And it’d also be an enemy to lovers trope, which is also popular.

Kara doesn’t have an iconic relationship spanning decades like Barry and Iris. CW could definitely pull and Oliver and Felicity and give the fans what they want and make a new pairing.

Especially with their relationship the focus of the current season, do people think they’re endgame?

Yes please! They are so cute. This needs to happen!

I don’t think they are endgame for a lot of reasons.

I see why fans would want it. There are moments when they look really good together, but… no. I don’t see it happening without a major Crisis aftermath new universe rewrite.

Also, there is such a thing as romantic friendship too, plus you don’t need to be bi or gay, or realize that you may be, before developing feelings for someone of the same gender. Sexuality is fluid.

I don’t know how I didn’t see this until now, but 100% yes. I can think of so many arguments in favor of Supercorp, but one of the main ones I keep coming back to is that I just can’t see the CW, w/ how much they love their relationship drama, letting Kara go much longer w/out an endgame romance the way the other Arrowverse heroes have. A new character wouldn’t work this late in the game cough William cough, and any other potential options have been written off. At this point, Lena’s the only character left who makes even a little bit of sense, let alone perfect sense

There is no indication any of them should be bi. Both have a history of male partners on the show.

Alex didn’t realize she was a lesbian until she was nearly 30, so why can’t Kara and Lena have realizations at similar points in their lives? Maggie was the one who helped Alex realize her sexuality, so I could absolutely see Kara and Lena fulfilling that role for each other

Kara even even saying no about being a lesbian when asked by Winn.

That was over 4 years ago. People change. Plus, she wouldn’t be gay, she’d be bi or pan

The actors flat out said “Never going to happen”.

Maybe at first, like when Jeremy Jordan claimed to have “ended” Supercorp during Comic-Con 2017, but that’s also changed. Especially at this year’s Con, the actors have become a lot more accepting of Supercorp fans in the midst of a lot more questions about the ship. Katie McGrath especially has made plenty of efforts to validate this ship and let fans know that she respects their preferences

Kara and Lena have a really unhealthy friendship on the show, including a long history of lies but going so far as to physical hurting the other.

For one, Kara has never physically hurt Lena. Second, Katie McGrath has specifically talked about how she’s been portraying Lena as someone who is acting like she’s all anger when really she’s all hurt, which makes perfect sense. Kara keeping this secret from her for 3 years is probably the biggest betrayal she’s ever experienced, which is really saying something. The fact is, she wouldn’t be lashing out the way she has been if she didn’t truly care about Kara. They’ve both made huge mistakes and have a ways to go before they can reconcile, but if the writers are committed to it (which is the biggest potential roadblock), a Supercorp endgame can absolutely happen

This brilliant edit also puts together a lot of different parallels from different points of the show and, for my money, is a beautiful argument for why Kara and Lena are soulmates. In summary: Supercorp is endgame. Fight me

Oh my god that legitimately made me cry. Amazing video, and I have seen just oodles of them. I really hope they get their happily ever after

I’m not ruling it out, but I’d be very surprised if it was.

Here is the truth: in the comics, Supergirl has never really had a very solid love interest. So if they want to pair Supergirl with somebody, it could really be anybody.

That’s fair, honestly I would be surprised as well. But you have to admit they’re so perfect together.

I mean… I am not a shipper so it’s not really my territory… but perfect?

Lena left Kara alone in a kryptonite cage on the North pole. That is literally the worst kind of torture you can subject a kryptonian to.

Someone did that in a real relationship they would be in jail. It’s just about as non-perfect as it gets in my book. I’m not going to judge how people play with pain and cages consensually, but that is not what’s going on here.

Think this falls into the category of cute “head canon.” But agree with @Coville that a history of deception and imprisonment makes this not such a good idea in the “real” world. I’d settle for Lena pulling back more from the Luthor way and building an actual friendship with Kara.

Kara was also able to walk out of that trap w/ no visible damage the second Alex and Brainy freed her. Lena specifically only used a low level of kryptonite - just enough to slow Kara down but not cause her any major harm. We also saw how desperate Lena was to prevent Lex’s cannons from hitting Kara w/ a full blast of kryptonite. I’m not trying to say Lena’s actions are totally fine, but it hardly makes her irredeemable as well

not such a good idea in the “real” world

Right, because if there’s one thing superhero shows w/ alien races on the CW are known for, it’s their realism

Dumb smile on my face all through this video.

You have probably seen this but in case you haven’t - Stjepan Sejic is working on a mindblowing SuperCorp piece of art in connection with the Creators4Comics benefit.

This is how it currently looks: 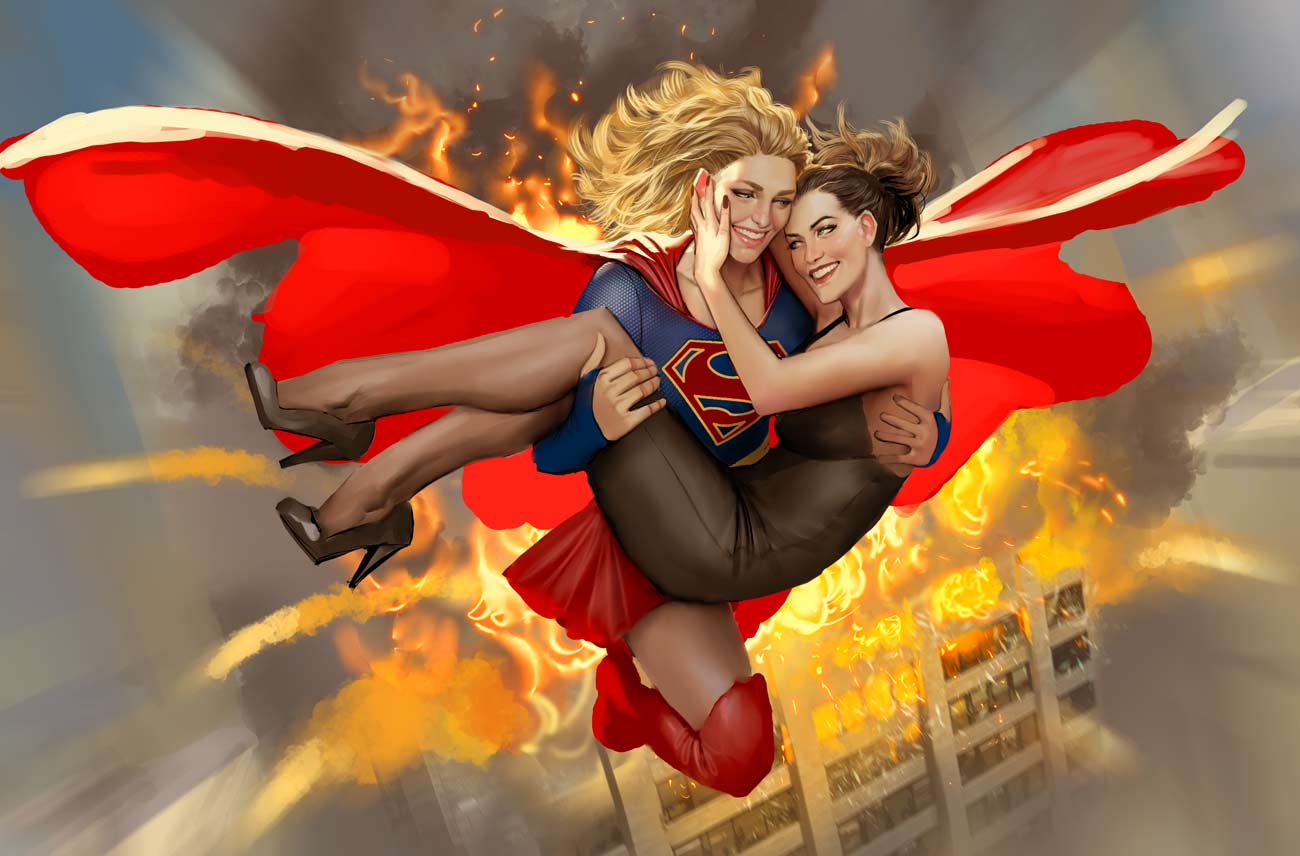 Not sure if anyone plans on reading the Silver Age stories, and if so, do not continue reading (unless you are already familiar with her).

In the Silver Age, Lena shows up as Lena Thorul who has ESP powers. Her brother was in prison, but despite the evil he committed, he didn’t want Lena to be accused of being a criminal or worry (the one good thing he did). When she met Kara, both of them looked pretty similar. At that age, Kara was smooching multiple guys around the same time, and was only interested in men. While that was the Silver Age and not now, elements of it still linger.

In summary, they’re friends, nothing more.

There’s been a ton of changes to the characters since then, and the show’s already provided us w/ what is essentially the definitive version of Lena Luthor. Just because there’s no direct precedence for this in the comics doesn’t mean it can’t happen in the show