Is President Superman a good idea? 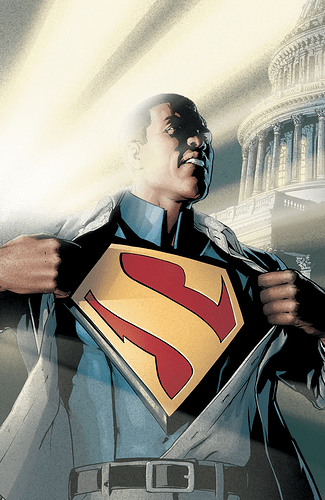 I love alternate Supermen. I love Earth-2, Red Son, New Super-Man. Val-Zod’s story this week in Superman Red and Blue was superb. They put a question mark at the end so I can’t wait to see if they’ll do more. Can’t wait for Jon this summer.

I can’t say that I like Calvin Ellis. I think Superman being President is kind of dumb and unrelatable. I know he’s meant to be based off Obama (I still still have the Chicago Tribune page from his Inauguration the same year Grant Morrison created the character). For me that kind of makes it a little more weird.

Like if I saw what was clearly meant to be JFK or Ronald Reagan flying over the White House in Superman garb I don’t think I would be filled with the same hope and inspiration I would looking at Clark or Val do it. I would just kind of cringe.

I guess that’s me, I don’t like real life celebrities or politicians (have mercy) in the mantle of my favorite heroes. I’m all for politics in comics though especially if it’s important to the storytelling. At the same time Superman shouldn’t be President, because that contradicts his awesome theme as an immigrant coming to America. Which I think is even sweeter than becoming President.

What do you think, is President Superman a good idea? Would you want to see less of him or more?

i dont like it. i like it better when superman can have free rein when it comes to heroism and politics could shield him from that

I’m not a huge Superman fan but from my reading I can say that Superman is 100% a political hero. He is literally an undocumented alien immigrant. A reporter. And a parent. Everything he does is for “Truth, Justice and the American Way.” If that isn’t political, I don’t know what is.

I haven’t read much of Calvin Ellis, but I love what I have read. He has kept his secret identity and become President at the same time. It is a really cool idea. And I am interested in how he will be portrayed going on. I’ve heard rumors of a movie and I think that would be really cool.

Basically, yes. I think President Superman is a good idea.

As @Row.Harper said, Superman is without a doubt a political hero. There’s a reason why Red Son is probably the most popular Elseworld of all time; because it takes the political set-up of Clark Kent and flips it on its head. Calvin Harris as a President Superman takes this concept and pushes it to the fullest extent (or at least has the potential to). I think the fact that Calvin has pretty much been exclusively been used in Multiversity means there hasn’t been much of a chance to explore what the set-up of the character has to offer.

Despite the fact that the character being based on Obama is a bit dated, the symbolism and thematic possibilities of the character are timeless in my opinion. The two key things that obviously separate Calvin Harris from Clark Kent are power and race. While Clark is limited to being powerful and influential when he puts on the cape, Calvin is constantly in a position of power. This creates an interesting dynamic because the way he needs to wield his power is completely different in each scenario. As the President, he is forced to focus most of his efforts on what can help American citizens the most. It’s limiting and has a LOT of pressure from all areas. While as Superman, he should (and needs to) be altruistic, noble, and conscientious of the whole world. It would be completely immoral to limit the use of his powers to just those in America. This is the main reason why I think a President Superman is so interesting and probably should be explored more. This back-and-forth dynamic and contradictory responsibilities makes for a really engaging set-up.

Beyond that, Calvin Harris as Superman alone could make for an interesting read. Why? Well, he’s Black. Obviously there is nothing intrinsically different or wrong with this. But it would be pretty ridiculous to imply that this wouldn’t have some major affects on the way the world views him (both as Superman AND the President). That one change, the color of his skin, would undeniably make the world view him differently from Clark. I don’t think it’s right, but it’s the unfortunate reality we live in. Calvin Harris has the potential to explore these themes on a macro level as Superman and put them in readers’ faces. Forcing them to look at the way the world still has so far to grow and evolve it’s compassion. While it’s not nearly as explicit with Clark, in many ways he did the same thing when it came to fighting anti-Semitic views of the time. It’s not a huge part of the character now, but Clark has some pretty undeniable Jewish roots that challenged the status quo and stereotypes when he first came onto the scene. I think Calvin Harris has the potential to do the same thing for the topic of race.

So, that’s a long way of answering: YES!!! A President Superman (especially Calvin Harris) is a great idea for so many reasons. It’s an interesting set-up that I would really love to see explored.

Superman is definitely a political hero, but I don’t think he should be a political figure. His whole deal is to lead by example and be a champion of the oppressed. Giving him a position of authority is just kind of confirming everything Luthor fears about him, which is that he’s here to rule us. Even benevolently, I don’t think Superman belongs in a position of power.

Plus, you know… he was born on another planet. The idea of a Black, secretly foreign Superman as President now carries uncomfortable parallels to the Birther conspiracy movement.

While I agree that a President Superman would be incredibly troubling in the real world, I don’t think that inherently means it’s not worth exploring. Obviously giving a single person such absolute power as both the President and Superman is a concerning dynamic, but I think that’s precisely why it’s an incredibly interesting set-up to explore.

Maybe I’m interpreting the question wrong, but I believe OP is asking whether or not it’s a good idea from a storytelling perspective, not from a pragmatic one. I think a President Superman’s conflict of interests and troubling amount of power is something that has a lot of potential from a storytelling and thematic perspective. Which is why I see it as a good idea. That said, I would 100% agree with you if we were treating the character as a real person.

For sure, we’d get some interesting stories out of it. Bet we even get a political thriller like arc. I mean character wise. Like relatability. The President is always one person. No one can relate to them beyond appearance. I do see a limited series with him at best but never an ongoing series because readers wouldn’t be able to connect with him on a personal level.

Permanent powerfulness just sounds boring. I love Clark’s journalistic adventures, Val’s reclusiveness, and Kong letting go of his aggression. You just get inspired when normal people are going through the motions. I went into journalism because of Clark. You can’t get anyone inspired by that office anymore.

Oh real President Superman would be terrifying. The only bright side is the taxpayers save billions on a defense budget. Guy doesn’t order drone strikes, he just flies through and scorches earth.

I don’t think relatability is cut off. Clark is basically an omnipotent God by all measures and we have zero problem relating to him. Yes, him being a bumbling journalist during the day may help, generally it’s not the focus of the story being told. I don’t think him being the President will limit our relatability to him so long as we can understand and relate to the emotions he is feeling. Situations are specific, but emotions are universal.

When I watch a show like Atlanta, I can honestly say I don’t relate to the situations they’re going through whatsoever. I’ve lived a pretty privileged life so the struggles being portrayed aren’t ones that I can relate to. But I can still watch and enjoy the ongoing show for many reasons. I really enjoy the characters, the writing, the overall emotions, the themes, and the message that’s being conveyed. On top of that, the fact that I don’t relate to them makes it incredibly informative for me on the struggles other people face.

At the end of the day, relatability is not the driving force of Superman comics and I think it’s a bit reductive to limit them to that.

His whole deal is to lead by example and be a champion of the oppressed. Giving him a position of authority is just kind of confirming everything Luthor fears about him, which is that he’s here to rule us.

I love the idea- Superman out of costume would work a job where he can still help as many people as he can. Reporter, firefighter, doctor, President, etc. Clark Kent didn’t choose that route, but if he had it would have been in character (he just wouldn’t have created the Metropolis Clark that we know).

Conceptually speaking, Superman’s powers will always be a source of concern in most, if not all, jobs that us regular humans hold. At a minimum, they give him an unfair advantage competing in the workplace. Whether it’s Janitor Superman or President Superman, I think it’s ultimately his character and what he decides to do with his powers that matter. I like seeing Superman lead. Yes, in most stories he leads more by example and inspiration, leaving the actual job of “running” things to others. However, it’s a lot of fun for me as a reader to see him take charge and have a group of people or heroes coalesce around him. A story like Panic in the Sky portrayed that (granted of course, he was only leading a group of heroes), and was pretty cool to read. So I don’t have issues with him being President. I think it’s fine.

It’s been years since Multiversity, & I don’t remember most of it. I did however, just read the Infinite Frontier Secret Files issue about Calvin Ellis. Was a fun read. I like the character, his drive, his strength, and his obvious desire to help humanity. What I’d like to see them explore more is the question of secret identity and its implications. Would it be better that he keep it, so he can manage his dual duties efficiently, as the story shows? Or would it better that the people know he is Superman, and still get behind him and vote for him, regardless of his otherworldly origin? I’m ok with either, but I think it’s a question worth exploring for the character.