After all the series gets a new creative team with Nightwing #51. 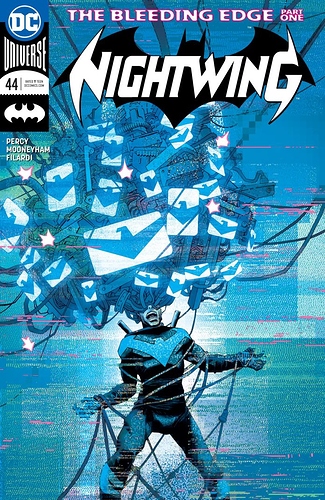 I think the intent was for Percy to have a long run that reset to a Nightwing Vol 1. Instead, his run was cut short by events in Batman and discussed in Nightwing 50, so Bleeding Edge is just one story arc (Vol 7). The status quo shift from Nightwing 50 is still ongoing. If a reader wants to jump into Nightwing and not be completely lost in the current book, I’d recommend starting at 50. (Although, I don’t actually recommend the current arc and hope it resolves itself in the near future. I’m not sure how a brand new reader would feel about it.)

In Percy’s run, Dick dialed back on the tech/‘on the grid’ stuff - e.g. wired phone - because weird things started happening in Bludhaven involving all that. I actually enjoyed the first few old fashioned type jokes, but I do think they got overplayed a bit. I love seeing Dick and Babs team up, so I was super excited to see that aspect of Percy’s books.

After Percy, Lobdell took over, hopefully Jurgens will fix this. With the 4th creative team swap in the last 20 issues.
I agree #50 is the better start by far, but it does rely on some stuff established in this run. Also it’s three months away.

I’m trying to give starting spots for the run.