Is Damian really the strongest Robin?

Damian sure feels like he’s the best out of the bunch,what do you think?

No question. Going by Batman & Robin (2011) Vol. 2 #0 (absolutely everyone should read it) ; Damian is Mini-Batman/Bruce with the Demon’s sociopathic upbringing. No other Bat-Family member comes close with an origin that extreme except for Cassandra Cain (who of the two is superior, that’s another story).

Designer DNA baby from the womb to the tomb. The al Ghuls wanted Bruce on their side, he declined, Talia hoped to make another Alexander the Great, went Tiger Mom-mode on Damian times a hundred, made an absolute monster compared to the other Robins. 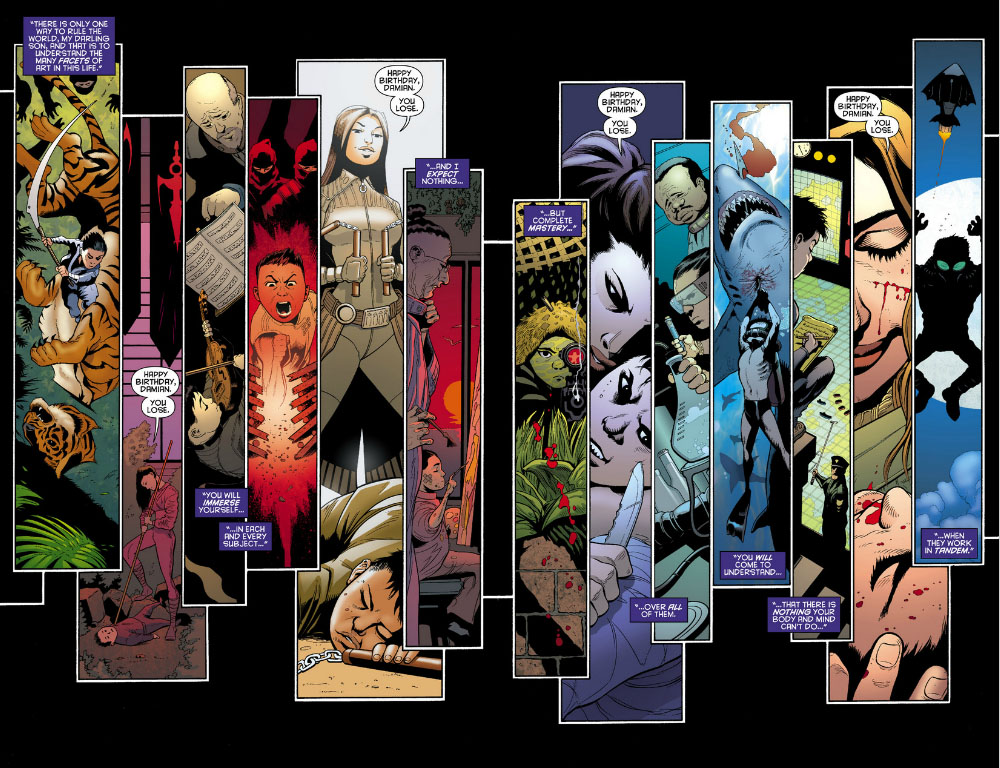 Eh. Hes definitely more skilled than the other Robins were at his age. But Id say their all pretty equal and it depends on what the writer wants in the story. Ive always liked the dynamic that they are three brothers and act like brothers.

You also gotta reallize the other Robins dont have the same mentality as Damian, so while they may be capable of doing what he does, they just arent psycho like he is.

He also has given more respect to Grayson than the other Robins. The short time they were a duo a together was also great.

I think people get too caught up in what the character says as being canon fact. Just because Damian thinks he can take on the Justice League, doesnt mean he actually can, it doesnt event mean he can come close.

It also makes it more satisfying when he is humbled as well provides room for development. I admit I didnt like Damian at first, but now I like him as much as the other Robins.

At the same time that the other were Robins, yes

I feel like Dick is more creative and experienced though, especially when combatting the rogues gallery.

Damian was raised and trained to be the best, of all humankind, so yes I’d say he’s the most powerful of the Robins. And imagine when he reaches physical peak.

Dick for sure was the strongest of them

That’s a really good point, @BatJamags! Other versions of Robin do specialize in areas that Damian obviously struggles in, particularly his leadership skills. To say that his ability to actually motivate and lead is lacking would be a pretty generous statement.

I do feel that, especially given his age, he’s one of the physically stronger versions of that character. He is a very well trained fighter. Unfortunately, even that can be to his detriment. He sees every fight as life and death and that mentality makes it to where he will take blows that aren’t really necessary because backing down isn’t in his character.

It’d be very interesting to see an adult version of Damian spar with Dick to see how their skill compares when they’re within the same age range.

Yes. 100% best Robin. Ok no Dick Grayson, but I like Dick as Nightwing.

In the movie Deathstroke impaled both of Damian’s arms to the wall with a knife and a katana. In two seconds, Damian pulls both arms out through sheer will and already has the katana at the ready to use while sneaking batarangs in the other hand …While running full speed at Deathstroke. Not long after, he catches a katana strike with his bare hands… the same hands connected to the recently impaled arms. I think that proves skill and conviction rival to Batman himself.

Earlier in the movie, Damian breaks into Bruce’s company office and easily gains access to his computer. He’s not only able to understand Bruce’s billionaire business dealings, he was able to sniff out an employee who was skimming from the top. So to recap: He broke through Batman’s security and solved a crime that Batman didn’t even notice was happening right under his nose.

This kid is not only the best Robin by far, he’s in the running for best Batman.

I would never place Damian on the top of the best Robin list. In my opinion he is not. The way he was trained by Mommy Nasty is to be Number One in all things and killing and knowledge is the best way to achieve this goal.

Damian has been killed, what 3/4 times (probably more), by being stupid/killing is best/etc. And he is a (fairly) new character. That’s not good leadership or ‘being the best Robin’ material. Actually, Damian is not stupid. He is very smart. It’s the blood/kill/IQ part of him that makes his very dangerous. (It’s all or nothing.)

Over all and thinking on various skills, etc. I would have Dick on top. Then Tim. Next Jason. Damian last but with age and learning to relate to others (play nicely) he could move up my list.

Now, if we are listing blood thirstiness I would have Damian, Jason, Tim and Dick - about the same. Dick being the more reluctant to kill. He was under Batman’s no kill training the longest so it would be harder for Dick to break that rule.