Is anyone else excited about the strong resurgence of the Outsiders recently?

The Outsiders have long been one of my favorite under-rated teams in comics. For those who are unfamiliar with the team, a good chunk of the original Batman & The Outsiders comic run is available on DC Universe. That’s why this growing trend of Outsiders and Outsiders-related characters showing me up has been super exciting.

Last week’s Titans introduced the Nuclear Family to a wider audience. This team of villains is mostly associated with Outsiders, with the bulk of the issues they appear in being in Outsiders comics. Though Titans may have taken some creative liberties with them, it was exciting to see them nonetheless.

This week’s episode of Black Lightning introduced Dr. Jace, a character that, to my knowledge, first appeared in Batman & the Outsiders. She is a long time ally that is responsible for Geo-Force’s & Terra’s powers, among many other useful additions to the team. It was super exciting to see her show up on Black Lightning, as he is one of the founding members of the Outsiders. It’s too early to tell how accurate to the comics she will be, but it’s a nice easter egg nonetheless.

The most obvious example is the upcoming season 3 of Young Justice that has the title of Young Justice: Outsiders. Thankfully, it does not appear to be just a reference in title alone. The trailers and brief clips have shown Geo-Force and the nation of Markovia, a country that is crucial to the Outsiders becoming a team.

Thanks to appearances on Arrow and the Suicide Squad movie, Katana’s star has been steadily rising. She got her own comic mini-series and has been a member of the Suicide Squad since the start of Rebirth. She would also appear in a story arc of Detective Comics that will be mentioned more below.

Also appearing in the Detective Comics arc is Black Lightning, where he teams up with Batman once again. At first it just seemed like a fun reference to their history together. This story proved to be setup to an announced Batman & the Outsiders ongoing comic, written by the same author. set for release in December. This is the first time that the Outsiders have had their own book since before the New 52.

I guess this is just a rambling post showing my excitement for some under-loved characters getting some well deserved love. Are there any other references that I have missed? Is anyone else as excited as I am?

The '80s Outsiders are some of my favorite characters, so I’m always happy to see them pop up in the DCU. DC readers seem to forget (or, they simply aren’t aware) that the Outsiders were one of DC’s most popular teams in the 1980s, after the New Teen Titans and Legion of Super-Heroes. These three teams sold well enough to receive second titles that where aimed solely at the direct market (the so-called Baxter books). 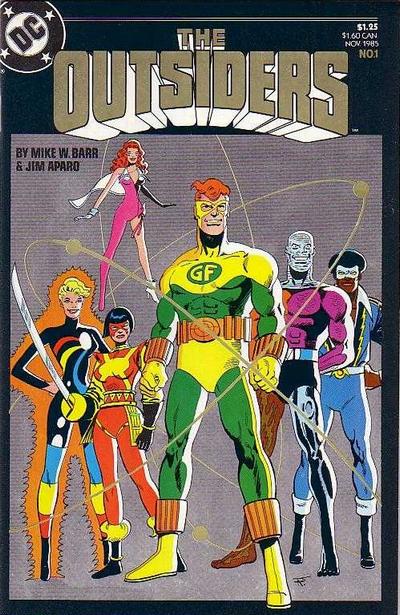 The Outsiders (Batman led or otherwise) are always great. If WB wants an idea for a new animated Batman show, they can’t go wrong with Batman and the Outsiders.

I really dug the most recent Batman and the Outsiders book (2007, 08 is when it began?). That was a fun read that would be fun to have on DCU.

Anyone remember how Beware The Batman tried to step up the Outsiders?

I remember Katana and Metamorpho were on it. Who else was?

@ tyler.saez00.33876 Beware the Batman was a great show that never gets enough love. I keep waiting for it to show up here. If it had continued, we would have had a wonderful season of the Outsiders.

I meant with regards to Beware the Batman, who else relating to the Outsiders showed up there. I only remember 'Tana and Rex.

The Outsiders were on Batman: The Brave and the Bold, right?

Katana and Rex were the only comic book Outsiders that showed up in Beware the Batman. The last episode showed them meeting up with Oracle and Man-Bat. Yes, they showed up in a few episodes. “Enter the Outsiders!” and “Inside the Outsiders!” were obviously focused on the Outsiders. They were also in the cold opens for “Duel of the Double Crossers!” and “Requiem for a Scarlet Speedster!” The cold open for “Requiem for a Scarlet Speedster!” is my favorite because it has the whole classic lineup and shows them facing off against their greatest foe, Kobra.

Thanks for listing the BTBB eps the Outsiders are in. I know which episodes of that show I’m watching next…

No problem, those were the first ones I looked up when DC Universe started, haha.

I’m with u, to pile on to the young justice point. All of those characters were based on characters from super friends “reincarnations” for lack of a better word. Offhand Idk them all, long shadow is basically Apache chief, one was based on Samura, static shock was just himself, I can’t remember the rest but Apache Chief was one of my favorites on super friends when I was little.

The version of the Superfriends that appeared in Justice League Unlimited was also great.

Regarding Outsiders, has anyone read their ongoing that ran from 93-95. I see several digital issues of it were released this week and I never read more than #0 from the series on print. It looks interesting.

Yep, the Ultimen! I bought the issues they added this week. Though there is a huge error in issue #1. It’s supposed to be a combination of Issue 1 Alpha & Issue 1 Omega, but instead it’s Issue 5 & Issue 1 Omega. I was greatly confused until I got to Issue 5. I’m interested to see where the series goes. It follows up on the plot points from the previous Outsiders series, which is nice. It is very 90’s though, which could be a turn-off for some.

I loves me 90’s books! Pouches and more pouches, everyone’s super serial, enough variant covers that you can duct tape them together and make a nifty slide from the Earth to the Moon (wear your helmet), outfits that have visible bodily doodads, everyone’s extreme and da bomb, TV show tie-ins, toyline tie-ins, crossovers galore, hilariously uninformed and ignorant people who don’t care about the amazing world of comics, don’t understand the concepts of supply and demand and think 80+ copies of every #1 issue from every publisher tucked in their basement will put them on Easy Street (their financial contributions to the industry were welcome though), characters dying and springing back to life like a jack in the box, bad costume choices, certain creators with overblown egos, etc.

I’m kidding largely but some of those things are true. I do sincerely like 90’s comics…from DC (and a decent amount of the superhero stuff from Image).

Thank you for the info about those digital singles of Outsiders. I’ll keep an eye out for that goof too, which will hopefully be fixed.