WEEK 3: WHATEVER IT TAKES
After Batman loses everything, a desperate final mission will lead to a confrontation between the Caped Crusader and the Man of Steel in this exciting finale to Year One!

DISCUSSION QUESTIONS
WARNING! SPOILERS
1.)Would you trust a tweet telling you that Batman is Bruce Wayne?
2.)Do you think #30 is commentary on anything? If so, do you agree or disagree with what you think it’s trying to say?
3.)Do you think Lobo stands a chance against Darkseid?
4.)Did you cry when Green Arrow died?
5.)What did you think of the battle between Batman and Superman? How does it compare to other battles between the two that you’ve read?
6.)What was your favorite moment?
7.)What was your favorite moment out of the entirety of Year One? 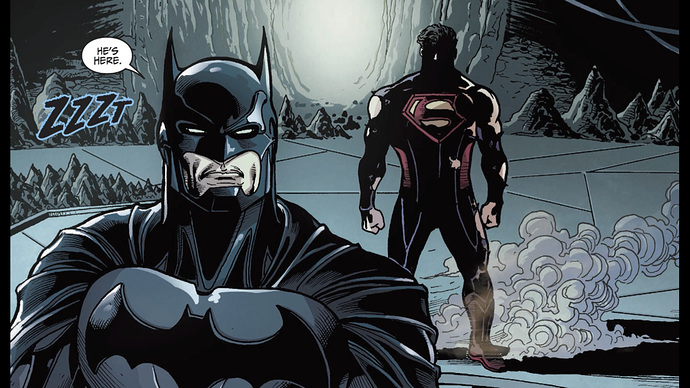 Is it considered rude to bump your own thread? Asking for a friend I swear.

In the middle of reading these now, definitely has somegood momentum going into them.

Okay, here are my thoughts:

“Would you trust a tweet telling you that Batman is Bruce Wayne?”

I think it would depend on Superman’s previous history on Twitter (a statement I never thought I’d type). Like, it makes sense with the context of what Superman was doing in the moment, but is this a new account? Where’s that blue checkmark? How could they even verify that it’s the real him in the first place? What if his Twitter account was hacked?

It’s a clever use of modern aspects to tell new stories, but it also raises questions for me.

“Do you think #30 is commentary on anything? If so, do you agree or disagree with what you think it’s trying to say?”

I think it’s pretty obvious it’s a commentary on “grim and gritty” retellings of Superman, which I think definitely works with this story, but not a lot on others. Like, I think they’re commentating on the “Man of Steel” movie, and I don’t think the complaints they deliver here really applies to that at all. It kind of reads like the standard scree of hardcore fans who can only accept rehashes of Christopher Reeves as Superman and nothing else.

“Do you think Lobo stands a chance against Darkseid?”

I hear Lobo vs. Darkseid, and I think “unstoppable force vs immovable object.” I don’t think either one could really kill the other, but damn would that not be a great fight to see.

“Did you cry when Green Arrow died?”

No, because I knew it was going to happen, both from the game and the scene in particular being shared on social media in the past. I will say that it’s extremely well done, and a great way for Oliver to go out, both in terms of serving the overall plot, and feeling personal to the character himself. HIs last thoughts being on Dinah are heartbreaking and on-point.

“What did you think of the battle between Batman and Superman? How does it compare to other battles between the two that you’ve read?”

It definitely feels like the stakes are raised, and a genuine fight. I think there’s some truth to what Batman said, that this is the kind of situation that Batman has been planning for years. It’s a lot more personal and tragic in that sense.

That said, the real knock-down, slobber-knocker fight that really works? Superman vs Alfred, and Alfred whooping that ass. Surprising, shouldn’t work anywhere else, but does here.

Outside of the aforementioned stuff in the questions and Alfred mopping the floor with Superman’s teeth?

I loved the moment in the Annual where Lobo punches Harley and when she’s on the floor with Lobo looming over her, she basically says, “I just got out of an abusive relationship. I’ve had a lot of time for self-reflection and you know what I’ve decided? No one gets to hit me again.” I feel like out of all that we’ve seen up to this point, between this series and other takes on Harley going on at the same time, this was the moment where Harley really started her turn into a more anti-hero direction, one that I think works pretty well for her. I’d love to see Taylor take on a Harley on-going.

“What was your favorite moment out of the entirety of Year One?”

There’s a lot of pretty good stuff there, but I think ultimately, odd art aside, I would have to go with Catwoman coming to Batman’s side after the death of Nightwing.

I don’t think Darkseid could kill Lobo in a fight, but I think he could at least beat him. After that there must be something in the universe that Darkseid can procure to end the main man’s life.

I also knew that Green Arrow was going to die, but I’ll admit that the way it happened made me tear up just a bit. First and so far only time a comic has made me do that, so congratulations to the creative team for making a scene that, for me at least, was super impactful.

I love the fight between Batman and Superman. It honestly feels like the most realistic fight between the two. Batman isn’t trying to beat Superman. He can’t. All he needs to do is keep him occupied long enough. That, in my opinion, is a way more realistic (and fun) scenario. And instead of trying to fight Superman directly, Batman hides in the shadows and plays mind games. And even then Superman finds him, breaks his back, and is only interrupted when the best scene ever happens: Alfred beating up Superman.

My favorite moment was either Green Arrow’s death or Alfred defeating Superman. They’re both so good.

And why hasn’t Tom Taylor gotten a Harley Quinn series yet? Or Suicide Squad?

Are we continuing this book club? Enjoying my first run at these but don’t want to get too ahead! Lol