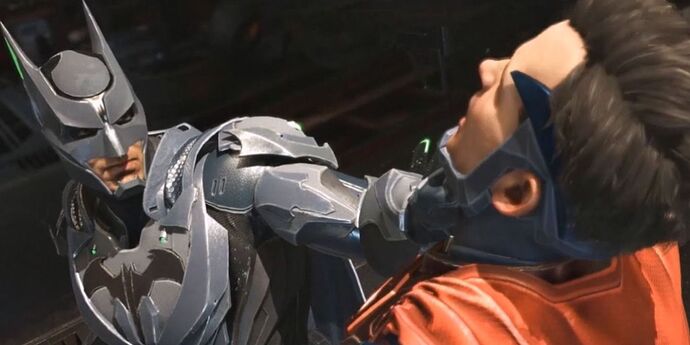 DC Is Making an Animated 'Injustice' Movie, So You Can Finally Watch an Evil...

It's the closest we'll get to Zack Snyder's Knightmare sequence turned into a movie.

No word on whether this will be a direct adaptation of the game(s), the comic(s), a sequel to Injustice 2, some sort of combination of any of those or something else entirely. It looks like we’ll get our first look no later than July 27 when Batman: The Long Halloween, Part Two comes out on digital, and it’ll probably be released early next year as the first DC animated movie on the 2022 slate. Whatever they end up doing w/ this, I’m just so excited to finally be getting more Injustice!

isn’t there already a movie? you know all the cutscenes cut together on youtube?

Interesting. Visuals will mean a great deal for me here. They need to get the costumes right, and if done in their traditional 2D animation style, it needs to at least compete with what was quality graphics in the game. Will definitely watch though. The mobile version if Injustice 2 is like, the only game I play

Visuals will mean a great deal for me here. They need to get the costumes right

I don’t see any reason why they won’t be able to replicate the costumes, but the animation style will definitely be an interesting point. Between Man of Tomorrow, Justice Society and Long Halloween, there’s clearly a new regular animation style for this new continuity. But Injustice would be pretty extreme to throw into the mix of this continuity so early w/out making some major changes to the storyline. I think it’s much more likely to be a standalone movie, and thus hopefully won’t be limited to that new style

isn’t there already a movie? you know all the cutscenes cut together on youtube?

I mean you can certainly watch it like a movie, but that doesn’t really count as one. This’ll be a separate, dedicated animation project likely adapting that source material in some way, but still being a separate thing from the games/comics

idk, i like injustice but I feel like its getting close to time to let it go, like we’ve had all these injustice comics, games, lets focus on something else, really I just want superman and lois to be happy

This is great news!

One thing I’ve always kinda wanted from the game & comics, is for this version of Clark to somehow redeem himself, possibly by making the ultimate sacrifice at some point. Didn’t happen, and if the He-Man / Injustice comic is canon… well… no spoilers. Probably won’t happen here, but one could hope

really I just want superman and lois to be happy

Agree, but between Superman & Lois and the newly announced animated show (not to mention Superman in the new animated movies), I think we’ll be getting a pretty good amount of traditional Supes. I’ll take this alternate universe tale

I just want superman and lois to be happy

That’s still the case in pretty much every other version of them currently, and Injustice is still less than a decade old. It remains pretty popular among a lot of fans, myself included, so I’m all for this Elseworld to be continued in ways like this

my main problem with injustice is that it spurned the whole without lois superman is evil thing. 1 that’s a pretty sexist narrative, two no, superman has other influnces/people in his life. injustice superman was manipulated like 70% of the time cause Batman was fighting him and diana was out of it or the manipulator

It certainly did. Tom Taylor did it rather convincingly in the comic though. Superman killing his wife & unborn son because of a Joker scheme was a truly heartbreaking sequence. I’d argue that Batman had a hand in completing the transformation as well. Instead of consoling and standing by his friend… supporting him through the ordeal… he stood against him. I think even Bruce acknowledges that at some point in the comics or games. In and of itself, I found it a compelling reimagining of DC lore, but I didn’t care for its influence on Superman in pop culture.

He did in the last Injustice 2 Annual. I loved how Pa Kent saw blame on both sides, not condoning all the awful things that Clark had done but also realizing that if Bruce hadn’t looked at the situation w/ such a black-and-white view, so much of the tragedy after Joker’s attack could’ve been avoided. Losing Lois alone would’ve permanently changed Clark, there’s no doubt about that. But between everything else he lost that day and the way so much was mishandled afterward, anyone who thinks that Injustice is simply “Lois died so Superman turns evil” hasn’t paid nearly enough attention

Losing Lois alone would’ve permanently changed Clark, there’s no doubt about that. But between everything else he lost that day and the way so much was mishandled afterward, anyone who thinks that Injustice is simply “Lois died so Superman turns evil” hasn’t paid nearly enough attention

Super excited for this, I can’t wait to see what kind of adaptation we’ll get and what characters they’ll include.

Looking forward to getting more news on it this summer!

Considering Shayera managed to make it through the whole series alive, I figure there’s a good chance she could get back in on the action!

Someone get Tom Taylor on the line!

I can’t express enough how excited I am for this. I’m looking forward to the plots. Thanks for sharing this. 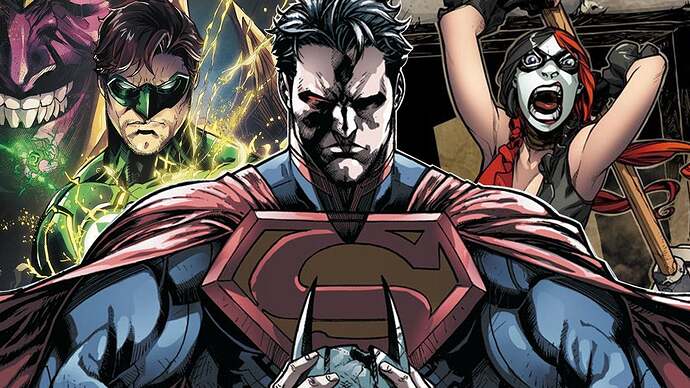 The wildly popular fighting game Injustice: Gods Among Us is getting an animated movie adaptation, likely before the end of 2021.

I AM LOOKING FORWARD TO THIS

so over DC and WB and their bs…