Injustice and the World's Finest Breakup 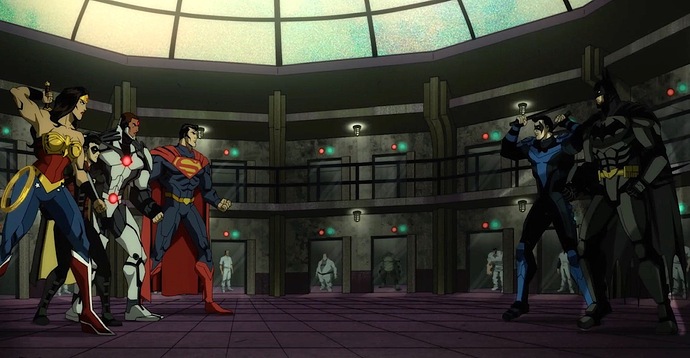 The end of a friendship can feel like a war, but that’s never more true than when we’re talking about the Justice League. Breakups can be messy, but when both parties are superheroes there’s no telling how much damage there will be or who will get caught in the crossfire. Injustice is the latest DC animated movie, and it tells the story of how the superhero community is torn apart when Superman embraces his darkest side. Based on the hit video game and comic book series, I previously compared the film to Super Friends meets Game of Thrones , but I think it can also be described as a breakup movie.

Batman and Superman have one of the most legendary friendships in superhero mythology (just look at those old World’s Finest covers), so it stands to reason that the end of their relationship would change the world. After the Joker tricks Superman into killing Lois Lane, the Man of Steel loses touch with his moral center and takes a new fascist approach to crimefighting. Batman tries to stop his friend from going down his bleak new path, but in the end, Bruce is forced to stand against Clark and the entire world finds itself caught in the middle. Is it possible that Batman and Superman’s friendship is what held the DC Universe together this entire time?

To read more about Injustice, head over to DC Comics!

Have you seen the latest animated Injustice movie? Let us know in the comments!

Just got a physical copy of the movie, gotta watch it soon

I have. Didn’t love it tbh. It felt too fast-paced and I thought it had a pretty bad conclusion. It was kinda underwhelming imo

ave you seen the latest animated Injustice movie? Let us know in the comments!

As you command- no, and I am not paying money to see it (I normally rent these movies from red box first chance I get). When I find it at the library or HBO Max I will watch it for payments I am already making anyway, not before.

I watched it, and thought it was a very good adaptation. The big three were front & center, but other characters like Green Arrow, Harley, and Plastic Man got time to shine. Action was great, which is important when making a film based on a fighting game. The fight scene based on Superman’s supermove was fantastic. I like the little twist at the end with alternate earth pregnant Lois talking down a crazed Clark. I also like our classic Superman appearing (though he got clobbered), letting us know this is an alternate reality. Movie could have made use of a longer running time, but I don’t feel my enjoyment of it was hindered as is. Job well done.