I think the story will be based on Blackest Night so Netherrealm Studios can bring dead fan favorites back. I think some of of the characters on the main roster will be Black Hand, Constantine and Nightwing. I think some of the DLC will be composed of Booster Gold and Plastic Man! 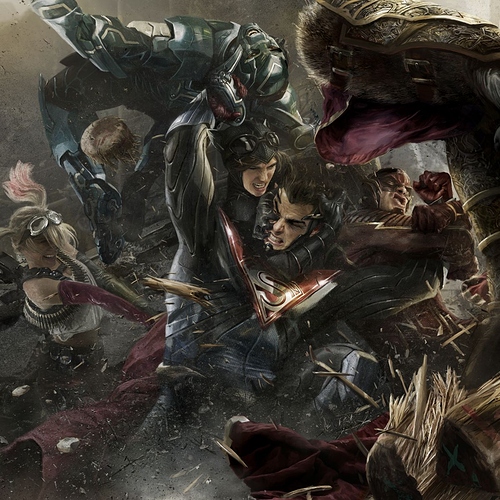 Here’s my idea for a story:

It takes place after Superman’s ending. Most of the heroes and villains are being mind controlled by Superman and his regime, but there are also some heroes and villains who willingly work for Superman to keep their free will. The few remaining rebels (I would include Green Arrow as a rebel) are working on rescuing an important prisoner (possibly Barbara Gordon?) to help them restore Brother Eye. They use Brother Eye to contact another dimension (the same one they contacted in the first Injustice) to help them fight Superman. The Justice League from the alternate dimension and the rebels team up to take down Superman, which they eventually do successfully. However, this was all part of Brother Eye’s master plan! It’s become sentient, and now that Superman’s out of the way, it takes over the mind controlled heroes and villains. The Justice League & rebels lose a few members (who are turned into mind controlled slaves), but the members of the regime who retained their free will join the rebels. They then have to fight Brother Eye and it’s army.

That’s actually a really cool idea! Wouldn’t it be cool if brother eye created an evil version of OMAC!?

If they do Brother Eye and OMAC, then I would like to see some characters from Checkmate. They could have Alan Scott as the Green Lantern. Sasha Bordeaux, Fire, Mr. Terrific could all be in it as well. They could even use Starfire’s model for Fire if they wanted to. I’m not sure what the story is in the Injustice comics, so I’m not sure if any of those characters are already introduced or dead.

I haven’t kept up with the series in a couple of years so I wouldn’t know either, but anything is on the table knowing Netherrealm Studios!!! I personally want to see more magic characters in the next game. New and returning! Like Swamp Thing, Etrigan, and Constantine!

I feel like someone will find Superboy, (Probably WW) and send him after Superman. Then Batman and SG will have to lead a team against them.

Honestly I don’t feel like am Injustice 3 should even be done at this point. It feels like the entire IJ series has been milked to absolute death and if Injustice 2 ends up being the last game I wouldn’t have a problem with that. BUT, if they do make an Injustice 3, I hope it’ll be the grand finale. And that goes for the comic adaptation as well (I say ‘adaptation’ because ever since the end of Year Five it’s just been a seemingly stand-alone story that doesn’t strictly follow the games’ plot. Which is actually something I like because I don’t have to worry so much about continuity and which comes before/after which). I just don’t want any more unnecessary material for this franchise.

Honestly, I2 was pretty much everything I want out of a game set in the larger DCU (the Arkham series is the watermark, but that’s focused solely on Batman). I don’t really need I3. If it had to happen, I would suggest a new story that doesn’t really build on the plot from the last two games and just kind of moves in its own direction.