DCUI Library, and you’re all cordially invited to join us (in Gotham, Bludhaven and Alleytown) for a book discussion! 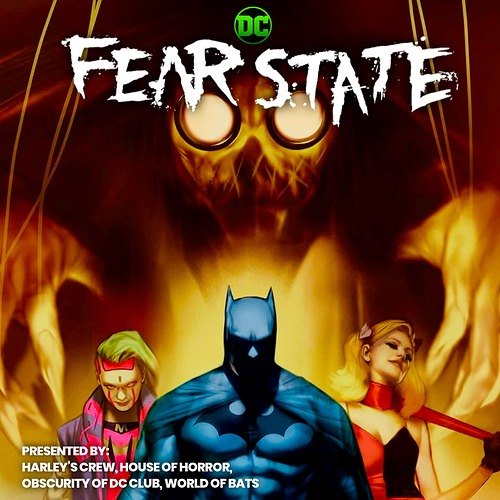 The event over a year in the making begins! Fear State settles upon Gotham City, and no one is safe! Overwhelmed by the dual threat of the Scarecrow and Peacekeeper, Batman and his allies have been one step behind since the events of Infinite Frontier #0. With the arrival of a mysterious anti-Oracle and the return of Poison Ivy…Batman might have more than he can handle!

READING ORDER:
(Links to the newest available issues will be updated monthly as they arrive in the DCUI Library.) 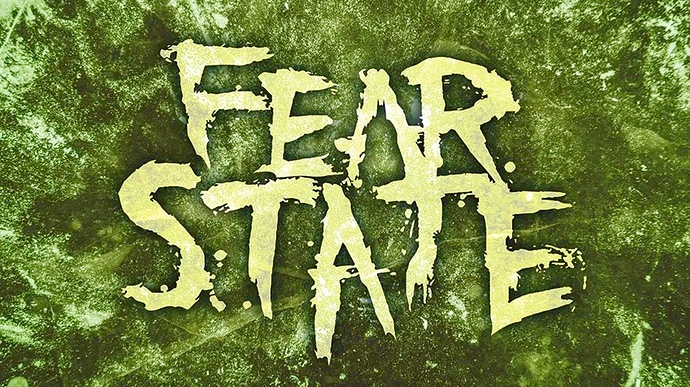 Discussion: Please try to blur any spoilers if you read ahead on your own, but feel free to discuss whenever you’re ready! Have you read it before? What did you think of the dialogue, plot or artwork? What did you enjoy or what did you not? Anything about the reading you’d like to discuss—Drop your thoughts below! 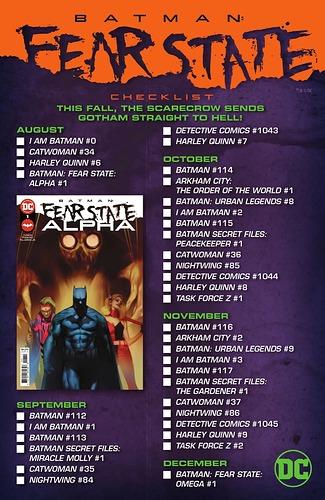 @HouseofHorror I would like to invite you to join in the Fear State crossover! I enjoyed this story a lot and can’t wait to read it again.

Like @D4RK5TARZ said, I think we’re all super (see what I did there) excited for Fear State. @ObscurityofDCClub will be focusing on the more obscure characters of each issue, but I will not be focusing on one thing at all because ADHD just works like that.

Please tell me someone laughed at that.

Fear state sure was an event that happened… and I did read all of it. Bridget Clancy came back in Nightwing, which I loved. I didn’t hate any of the issues involved so like it’s not baaaaad.

Definitely looking forward to delving into this event!

I honestly enjoyed Fear State a lot more than Joker War, but that could be because I just really dislike the Joker. And also I like Miracle Molly quite a bit.

I can’t speak for the quality of Joker War as all I read of it was it’s intersection with Nightwing which was like… fine I guess. I was half tuned out for most of that period due to Ric and I was bingeing through that whole arc because I had been too lazy to read it despite buying all the issues as they came out. I do love Miracle Molly though, that’s another positive for the arc that I forgot, which tbh I was fine with most of the crossover books because I like Detective, Nightwing, Harley Quinn and Catwoman even if they got worse and they were placed into fear state

I enjoyed the entire lead-up to the event and the ark between Future State (Gotham) and Fear State. It’s one of the few events where we got to see both possible outcomes come to pass without the other outcome being no more universe. However in the aftermath we see Bruce in a mental state we have not seen since Jason Todds Death do to just not being able to decompress. really given how he had built himself do to his deeds in his kids eyes he does not really need this he is machine next case, with only tim really noticing and caring that bruce is in a bad place. yet wanting to spend time with his new boyfriend, Alfred gone, Dick not caring about Bruce being happy and spending time with Babs defining there relationship, Jason unreachable, his break with Selina (which both are trying to honor) Cassandra and Steph working on the new oracle net,Ghostmaker training Clownhunter, Helena in Arkham tower, Jean-Paul doing whatever it is he is doing, the Foxes abanding Bruce, Duke doing his daytime hero thing, and now what Damian does to him in events of Shadow War Alpha. Bruce is in a bad headspace which means he is going to likely get badly hurt by the end of Shadow war.

Starting this one tonight!

Please tell me someone laughed at that.

I did. You’re welcome, lol.

Started tonight, can’t say I was too impressed with the first issue of the series. Let me preface this by saying I am by no means a bat expert and have not been keeping up with recent developments. That being said, why is Jace or Tim or whoever he is dressing up like Batman if he doesn’t like his methodology or what he stood for. He also felt Batman was just a soldier for his father and the Waynes. Also he hates the rich but he is rich… I feel like green arrow would be better role model for him.

Should I read that infinite frontier 0 book before I get any further?

Jace’s story began in Future State then moved to Next Batman: Second Son and then I Am Batman. All of this could be just one series as opposed to reading I Am Batman 0 thinking it is the first issue. (Yeah, it makes no sense but number 1’s sell better than number 2 or 12). Anywho, those books are not needed per se’ to understand what is happening. I like him as Batman but he had a rough start. I am not sure if you read No Man’s Land but there was stuff leading into the main story that wasn’t exactly needed but it sort of fills in the blanks later in the story, that is what IAB 0 is.

I personally would read that Infinite Frontier 0 beforehand. It acts as the bridge between Joker War and Fear State but also has some other cool things like explains where Barry is, even thought that isn’t Batman related. If not, you can just PM and I can pretty much fill you in what happened.

Sorry, couldn’t suspend disbelief here, jumping onto someone from this height would have probably killed the jumper and the unassisted jumper.

Maybe his shoes are memory foam?

So his feet feel amazing for about a mile of walking and then all of that cushion disappears?

He must not have heard about the recalls. 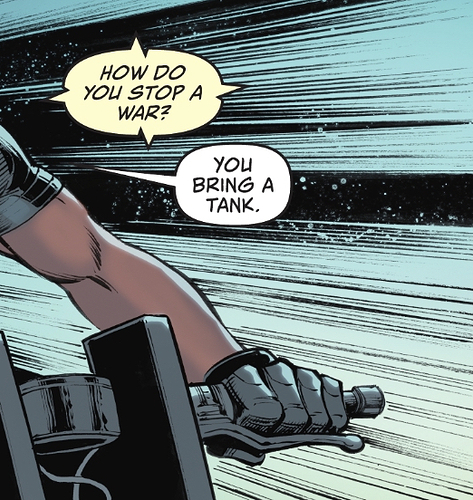 I’m pretty sure that one tank hasn’t ended a war before.

Then again, they could be Russian tanks and will break down on the way to the war…