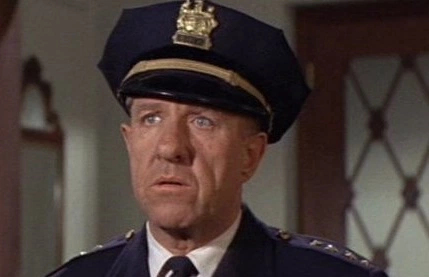 I have been watching Batman '66 and one thing that I have been asking myself is how Chief O’Hara still has a job? Whenever a crime happens in Gotham he asks, “What would we do without Batman?” My answer to his question is that he would need to actually arrest The Joker or The Penguin or The Riddler himself and not rely on a guy in gray tights and a boy with short shorts.

Who are other characters that are completely incompetent throughout the DC multiverses in all forms of media?

At least O’Hara is merely incompetent and not corrupt. Bullock was originally both when Doug Moench initially introduced him. (And yes, the character technically first appeared in a standalone story some years earlier, but Moench took little more than the name of that version when he introduced the Bullock we all know.) Thankfully, Jason Todd helped to straighten him out and restore his competence and honesty.

I would like to give a big fanfare for the staff of Arkham. What’s their recidivism rate if I may ask?

Beast Boy in Teen Titans. I could never take him seriously in the show, and when he had to assemble a makeshift Titans team I was just saying no.

Arkham Asylum (it’s a character, right?). Nobody who arrives there is rehabilitated. It’s entirely insecure. If you’re an employee you have a 50/50 chance of survival when you go to work any given day.

Sorry @Coville. I didn’t read anything before I posted.

Seriously, Arkham’s staff members are a joke. Bane had more success rehabilitating people on the Harley Quinn Animated Series than these guys ever did in the comics. Who trained the security there anyway? Everybody always escapes. Furthermore, does anyone actually get medical treatment there?

If one reads The Joker series in the 70’s, Arkham Asylum is shown to be as effective in incarcerating hardened criminals like Mr. J as Gotham City Prison is depicted in the Batman TV series where he escapes during the prison softball game by pitching the baseball filled with a smoke bomb and the pitcher’s mound concelas a giant spring which catapults him over the prison walls.

I have thought about it. Aside from Chief O’Hara, I would have to think the staff of Arkham Asylum are incompetent. Just how many escapes has that place had? Also, the penitentiaries around Gotham also seemed to be staffed by equally incompetent corrections officers!

Otis from the Superman movie. He wasn’t much help to Lex.

Otis did get his own musical leitmotif courtesy of John Williams with the classical usage of the burbling bassoon in the track entitled “Lex Luthor’s Lair” so clearly Otis has qualities which are inscrutable.

Iris in the CW Flash.

To be fair, Nemesis tells Diana she’s bad at keeping a secret identity in Simone’s run, so at least one person figured it out. Bruce and Barry both wear full cowls, so they have more of a shield (hair, voice, and eyes are sometimes all obscured).

As for Lois and the Daily Planet staffers… I have nothing. The awed blindness at Superman’s first appearance (or whatever excuse) should have worn off way before DC let it, especially once Lois started to actually interact with Clark outside of work.

Also, Batgirl needs her cowl back. At least try to give Jim plausible deniability… If that’s not an option, then whiteout the eyes of the domino ears (her eyes keep changing colors anyway

I liken this a lot to the “Martha” scene in BvS - a moment that might not be written the best, but the inherent meaning still comes across effectively enough to make me forgive any shortcomings. Barry and Iris are full partners in all aspects of their lives, and while Iris is obviously not the one out there running and fighting villains (expect for the 1 episode where she got speed powers), her support behind the scenes is invaluable and Barry just needed a stark reminder of that. I’ll admit I’ve poked fun at it occasionally because it’s not an inherently great line, but there’s a difference between making a few jokes about it and using it as justification for calling Iris incompetent, which she really isn’t

I am reminded of that short series Superman: American Alien. In this storyline the residents of Smallville, at least a good number of them, knew or suspected Clark Kent’s secret. In one episode the town sheriff comes to ask teenaged Clark’s help to catch wanted fugitives. Later in the same issue the sheriff tells Clark to be subtle or he won’t be able to protect him. In another issue John and Martha take little Clark to the doctor and from the conversation we see that the doctor knows Clark is not from this world. And later in another issue Clark, now living in Metropolis, is visited by his two best friends from Smallville, both of whom know he is Superman and as they talk we get the impression almost everyone back home knows. Going by this storyline that is an entire town that is not incompetent.

The Flash isn’t very well written in general. . We can agree to disagree but in my mind her character is practically pointless by this point.

I can definitely agree that the problems w/ the writing have gotten bigger as the show’s gone on, unfortunately. I don’t always like the way Iris has been written, but I certainly don’t hate her character or feel she’s useless. There just seems to not always be a clear direction for where the writers want to take her, but she’s still had some strong moments/arcs

I am not sure that this counts, but many golden age characters had seemingly-incompetent sidekicks. I have to say “seemingly” because most of them shined on occasion