Can we all have a moment of silence for our favorite vintage speedster’s first lady? 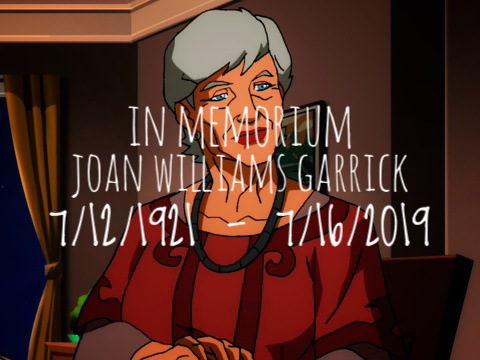 Joan Garrick’s life was tragically claimed by a case of off-screen-no-explanation-itis. Rest in peace, Joan.

It’s possible since it won’t violate the Bucky rule.

Thinking like a script writer, is it possible that the loss of his wife makes Jay able to sacrifice his life for Wally West, since Wally is like a grandson to him and Jay has had a long life and longs to be with his wife in Eternity?

I don’t think jay likes him enough to do that…

@Maddox.
with Animated Jay, I’d say that’s a possibility. (On the other hand he does love his wife that much and he was already more than semi retired anyway.)
However, Comic Book Jay absolutely viewed Wally as a surrogate grandson and said so during Zero Hour when it looked as if Wally was lost early on.