If You Had To Choose Only One?! Harley Quinn or Poison Ivy?

Who do you guys think is cooler

C’mon now @Nickywood- you know this decision is impossible for some of us to make. 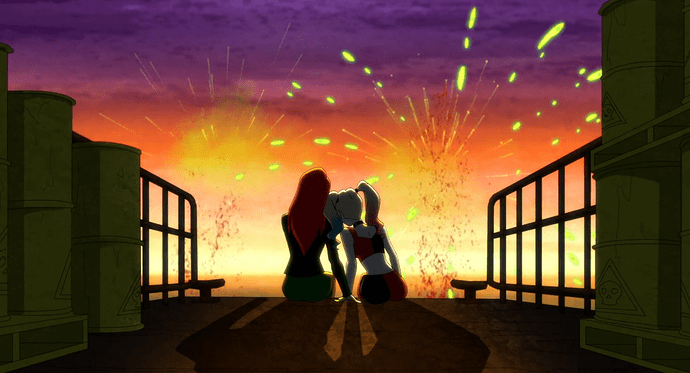 Ya your right they are a team

Robert Kanigher’s creation vs Paul Dini’s. One who was created to be romantically involved with Batman vs one who made both attracted towards each other. Guess who I’d choose.

Welcome to the DCU @CurtisBragdon!

Harley Quinn, because she’s funny, cute, awesome, epic, lit, and adorkable, when it comes to her, obsessions with smashing, being naughty, her ‘puddin’, The Joker, and her lovable, loyal hyenas, Bud and Lou (but changes from some different hyenas throughout some movies and TV shows, Moe, Curly, and Larry in Batman: Hush, Lucy and Ethyl in DC Super Hero Girls 2019, and Bruce in Birds of Prey (and the Fantabulous Emancipation of One Harley Quinn), named after that ‘hunky Wayne guy’, Batman, and she even turned into a mutated hyena, while her puddin is a cobra and her best friend is a Venus flytrap monster, in Batman vs. Teenage Mutant Ninja Turtles and in the comics it was based on too), next to Catwoman, Poison Ivy, and Cheetah (Wonder Woman Supervillainess), Harley is one of my all-time favorite super villainess-switched to antihero throughout the DC Universe, with some additions from Rose Wilson, Terra, and Jinx in Teen Titans Go!, when they do Girls Night Out with Starfire and Raven, when the boys (Robin, Cyborg, and Beast Boy) are away to being goofsters.

This was so hard

but I gotta choose the red head

@Razzzcat must be biting her fingernails rn

but I gotta choose the red head

I’m with ya here!

I LOVE Harley. Love love love her. But in the world of comic books, Poison Ivy is just much cooler (please don’t kick me out of the Harley Quinn fan club)

Without Harley we wouldn’t have Ivy and that a world I wouldn’t imagine living in.

Do you mean we wouldn’t have bi Ivy or Harlivy specifically? Because I could get behind that argument, but if it’s just the characters in general, Ivy predates Harley by about 25 years

I’m sorry if I didn’t make myself clear. But I’m behind any love in our world and DC Universe.