If You Could Have Anyone Make Your Dream Book, Who/What Would It Be?

RIP to the Brother DWayne McDuffie. Dude was ahead of the times

Oooou this is a hard one cuz there are so many combinations of people that I wanna see.

I would love to see Sam Humphries get a chance at a whole Nightwing run with Bruno Redondo as the artist and whoever is coloring the current run. I mean The Untouchable has got to be one of the best Nightwing arcs and my personal favorite. But I would also love to see Mark Waid on Nightwing as well. Both of them are dream teams.

Paul Dini NEEDS to come back and continue Zatanna. Idc, Idc if the series was cancelled for New 52 bring it back! But I would love to see the art team from 2018’s Justice League Dark or even Stjepan Sejic!

I would love to see Kyle Higgins, Terry and Rachel Dodson, and the guy doing the colors on the current Nightwing run (love that dot shading) do a run on Titans. Higgins and McCarthy worked really well with the characters in New Order for it being set outside of continuity, but IDK something tells me the Dodson’s are a better fit. ■■■■ Teen Titans Academy that ■■■■ is trash

give me a fab 5/NTT combo which I think they can do really well! Plus Higgins also had a really good voice for Nightwing even though his run had so many limitations from Didio, Lee, and the Batfam books. This would be a great opportunity to shine without all that!

No idea who I would want to write Wonder Woman but I definitely think a new writer is in order because we can’t keep relying on Greg Rucka. What happens when he (god forbid eventually) dies? Will we just never have a good WW series again? Someone new needs to step up. As for the art I NEED someone that isn’t just gonna copy the movie costume on top of making her look Greek instead of white washing her. Like damn it is not that hard to give her that olive tone and dark, wavy/curly hair. I also need the silver back instead of the gold. Like can we please differentiate her colors from Superman? Plus her suit was made in the likeness of the US flag to represent her as an ally when bringing Steve Trevor back so red, white, and blue should be her colors, not red, blue, and gold. And we need stars in her costume again as well. At this point I think Cliff Chiang is the best bet.

Can I place an order for one of each book everyone has already mentioned? 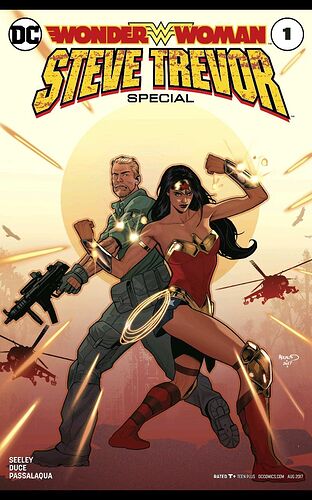 It’s impossible now, as Darwyn Cooke died a few years go, but I would have loved to have seen him on a regular title about the JSA during the Forties.

All of the previous ideas are dope as hell btw.

Just got this book in the mail. Recommended for any Jonah hex fan.

Seeing so many people wanting Tom Taylor to do other Batfam characters is funny to me cuz his Nightwing run is a piece of ■■■■ like please if you want him to ruin your favorite character be my guest! Please take him off our hands so we can get an actual qualified writer on Nightwing

Earth 8 by Giffen and DeMatties

I am a huge fan of the JLI and miss these guys writing style. Comics are a bit too dark these days, and their writing is a breath of fresh air.

As for choosing Earth 8, I think it will be a fun way for them to make fun of the Marvel Universe. They have shown an interest in Earth 8 before by inducting both Blue Jay and Silver Sorceress into the team, and they have been known to parody Marvel from time to time (Mr Nebula and the Scarlett Skier, General Glory, etc).

Giving these guys a whole world of their own to play with, and also having fun with all the Marvel hype that they have been getting from their cinematic universe, would make this title really fun to read.

My dream book would have the core Titans team split and be replaced by less active Titans.
I think it’s weird that Nightwing, Raven, Donna, Beast Boy and, Starfire spend so much time together as adults. Nightwing has had numerous lovers and has his own rogues gallery. I really feel these characters should have at least a couple of nemesis and lovers also. They are in their 20’s…right? I love seeing them have adventures outside of Titans! Keeping these characters in Titans stunts their growth because, for one thing, they’ll always be subordinate to Nightwing.
Peter Milligan is my pick for writer.
I’ve typed and deleted several team lists because I realized I was just filling the rosters with my favorites. There are 3 characters that I REALLY want in a New Titans team and that’s Tempest, Static, and Prysm.
Peter Milligan is one of the few writers in comics who, after 40 years of reading, surprises me. His Justice League Dark was spooky and far too short of a run. Infinity Inc. and Girl were also very interesting.
I’m curious to see how Milligan might reinvent the Titans. And what becomes of Raven, Beast Boy, Donna and Starfire without the Titans. (Any guesses folks?)

My dream book would basically feature Cassandra Cain, Tim Drake, Steph and others picking up just before Flashpoint. No stupid new origins or retcons, no crummy poetry or forced crying.

Can’t think of a single writer currently at DC I’d want on it, so…I elect me (hey, this is basically a wishlist thread, so why not?).
As for an artist, I’ve been partial to Dustin Nguyen, but Marcus To would be a nice choice as well.

I had ideas and then changed several times reading the great suggestions.
Justice League of America satellite team by Francis Manapul. Definitely art and I tend to enjoy his writing so he can do double duty.
Satellite team by Busiek and Perez.

My first thought, short and sweet, is Christian Bale. In interviews he’s mentioned how he deeply studied the Batman comics and came away with an understanding of the “monster” inside of Bruce. Not only has he embodied the character, but combine it with his other acting experiences and comic knowledge - I see a recipe for possibly the best Batman book ever made!

Incredibly tough question as their are hundreds of answers we could all dream of.

First gut reaction: a Brave and the Bold series with done-in-one issues. Tom King writing, have a rotating group of artists (top picks would be Marcos Martin, Mitch Gerads, Lenil Yu, Jorge Fornes, just to name a few). Have Batman be the constant and team up with some B-D List heroes and villains, give them a little spotlight

Welcome back to the community @thatonetim! I like your idea of allowing lesser known heroes to get some time to shine! Love me some diversity