Hey everyone, like most of you probably…I have been SWAMPED and overwhelmed by the new addition of comics. I love it!!

So something I just got done binging (took me 2-3 hours lol) was Identity Crisis. Imo, it was a beautifully crafted story…had me racking my brain the entire time and did not think it was going to be Jean…of all people!!! It was good though, I really got to connect with the league and see the vulnerable sides of our heroes. What did you all think??? Would love to hear favorite parts or overall opinions. Shockingly I saw mixed reactions/reviews in the comments section within the individual issues.

I did have one question though, where does this mini series sit in the grand continuity. Hal was the Spectre so I take it that it was pre flashpoint/new 52 but post crisis??? So like the New Earth era?? I’m horrible with labeling timelines and what not…still slowly doing my research with everything pre-New 52.

Identity Crisis came out from June to December of 2004 so that puts it in the post-Crisis continuity.

As for thoughts on it, while not my favorite Brad Meltzer penned DC effort (that’d be his JLA run) it was good. The Michael Turner covers served as nice wrappers for the content within.

Identity Crisis was actually one of the first books that was done for the community Book Club! You can check it out here: https://www.dcuniverse.com/community/boards/comics/dcu-book-club-week-2-discu

From what I remember, my thoughts then were essentialy: amazing artwork, interesting characterization in terms of the whole “League Within the League” concept, but I found the way that Melzer wrote a lot of the women characters to be very lazy and borderline misogynistic, and that’s not a term I throw around lightly.

As for continuity, it was Pre-52/New Earth era. Specifically, this was one of the stories that lead up to Infinite Crisis.

My personal favorite of Meltzer’s DC work is his Green Arrow arc, “The Archer’s Quest,” which is basically Ollie travelling the world to gather things that were hidden away after he died.

And yeah, those Turner covers are amazing. 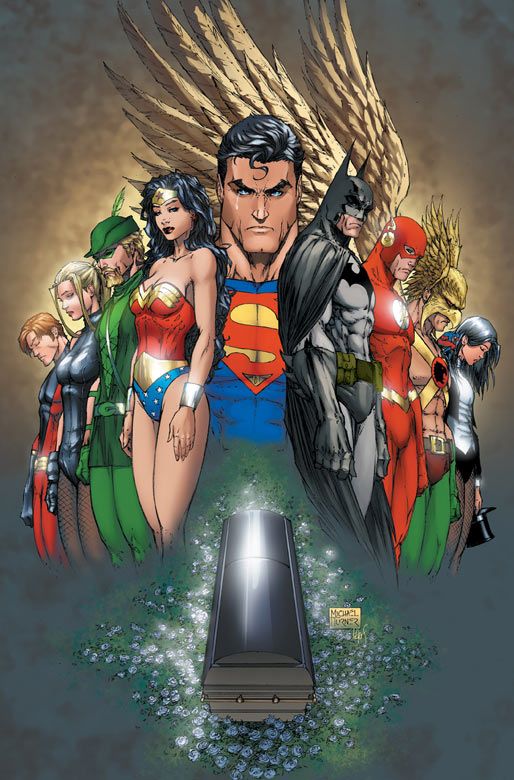 I loved Identity Crisis. It was what got me back into comics after a long stint away. I had been off comics for years and years, but wandered into my LCS and got to talking and asked for a recommendation. Identity Crisis had just wrapped up and while not all first prints they had the entire series. So I bought it and gave it a read and like an alcoholic who can’t have just one drink I was hooked all over again.

As for the story, it was really well done and well written. I get there were some continuity issues to past stories and do agree that looking at it now especially, you do wonder if they had to go the route they did with Sue Dibny to tell the story.

But as a Super Hero murder mystery it was great. When DCU uploaded it after it’s initially being rotated out I read it and even knowing exactly what was going to happen, I couldn’t stop and read it all in one sitting. if I was to list my 10 favorite story lines in comics, this would definitely be near the top.

I wasn’t a fan of the story. The death of Sue seemed unnecessary. What happened to her before seemed unnecessary. The reveal of who the killer was ended up being underwhelming and its yet another story where a writer goes out of their way to make Batman be the one with the moral high ground against other heroes.

Had this been billed as an elseworlds, I might have enjoyed it more. I don’t outright hate it, but I haven’t made an effort to read it again.

I didn’t care much for it, or Meltzer’s storytelling style.

Sue’s death was unnecessary, the rape scene was a bit exploitative, Deathstroke’s power level was increased with no explanation (he cannot take out the League that easily), and Jean as the killer made no sense.
The whole thing was contrived, IMO.

My other major problem was the fact that this felt like DC was heading in a direction I wasn’t going to like. Between Hush and this, it seemed like they were banking more on names like Jim Lee and Brad Meltzer to sell books rather than stories. That was the nature of comics at the time: names were selling. And it’s not like I can blame them for that. It’s still a business at the end of the day. This was also the time we were in the thick of the Bat-God period where Batman was infallible, so these two events and interconnected in my mind.

interesting, seems pretty split in reviews again😂 If anything, I think it shows that overall it was a good run if it’s resulting in the “either you hate it or love it”

I’m a little confused now cuz Vroom said it’s post crisis but someone else (forgot the username…darn phone capabilities) said it was one of the events that actually led to infinite crisis??? I might of misread something as well lol

thats a really good point superby1. it probably would of been a difference reading experience if I read this when it first released.

It’s okay, there are a LOT of Crisis’.

When people say “post-Crisis,” they mean post “Crisis on Infinite Earths.” That came out in 1986, and Infinite Crisis was in 2006.

The first one, which is what has gained the most significance historically, was ‘Crisis on Infinite Earths’. When people say Pre-Crisis or Post-Crisis, this is the Crisis they refer to. In real world time, this occurred in 1985.

‘Infinite Crisis’ was a later Crisis event that actually tied into the original Crisis by bringing back a few characters that disappeared at the end of the original. This event occurred in 2005.

As far as I know… someone might want to correct me… Post-Crisis is anything from 1985 after Crisis on Infinite Earth up to The New 52 in 2011.

the pieces are connected!!! I sincerely appreciate it you all, omgsh I understand now :’) I’m eager to read Infinite Crisis now…and you all said it takes place in 2006…so that outs it in the pre-flashpoint/New Earth?

thanks again you all.

To my mind this is the most overrated comic classic and further I find it completely distasteful and shitty. Hated it at the time and re-read it to be sure when i got this service. Gross

I liked the feeling of mystery, but thought the reveal was off - though I knew the story before I actually read it, so this could have played out differently to fresh readers. I liked a number of quieter character moments, especially Ralph talking about Sue.

I disliked the general premise of the ‘clean up’ level heroes dirtying their hands as the big three fly away. Wiping/altering minds is the purview of villains, not heroes. This felt almost more Watchmen-esque than DC Superheroes - or at least the versions I’m familiar with and like. Wally’s initial horrified/disgusted reaction was pretty much mine, and I also had a hard time believing a lot of the heroes involved would stand by and keep quiet. The whole thing left a bad taste, and frankly, I’m glad it’s not in continuity anymore.

I’m not very familiar with Sue, but I don’t think everything that happened to her was necessary. I also disliked Tim’s father being killed, since one of the things I liked about Tim was that he had a family outside the Bats wasn’t associated with their world through tragedy (unlike previous Robins and most Bat related characters). I haven’t seen Jean in anything else, so I don’t know how her characterization/decent compares to previous portrayals, but I still thought the reveal and level of crazy displayed (hitherto unnoticed?) felt off.

My only experience with Identity Crisis is Linkara’s “15 Things Wrong with Identity Crisis” video, which has obviously biased me against it somewhat, and this thread has actually convinced me that I should probably give it a read. That said, the plot points I know of from it largely consist of grimderp retcons, out-of-character behavior, and shock deaths, which are decidedly not things I like.

Also, there is no way Deathstroke could take down the entire Justice League, even without the Big Three. Just… no.