Identity Crisis: Love It or Hate It?

Do you like Identity Crisis? Do you think it’s the worst? I’ve never heard a real consensus on it. It is probably the most polarizing storyline I’ve ever heard of, for sure. Personally, I think it’s poorly paced, nonsensical, and is over-reliant on women in refrigerators and caption boxes. This thread is not intended to target those who enjoy the series, merely to spark discussion about its merits and flaws. Spoilers OK! 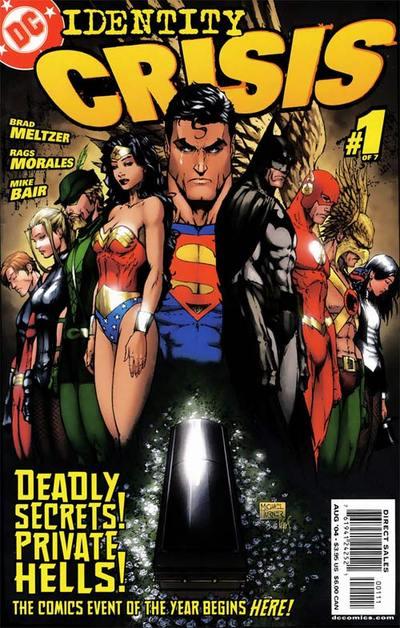 Love it but wish it was a little more psychological. It’s revolutionary for the time but isn’t so much now.

I like Identity Crisis. The last time I read it was in 2005 when the final printings of each issue came out (I wanted a set of those to go with the first printing set).

I’d really like to see the cover of the digital edition of Identity Crisis #1 be changed to the original Michael Turner cover the first printing from 2004 has. The current cover is from the third printing of #1 and by Rags Morales. However, that’s up to DC’s digital conversion team and not DCU.

The thumbnail for the series in the Comics section seems to be MIA at the moment. It used to be the 3rd printing #1 cover.

Sue Digby was a beloved character to me. I think writing a story about her murder and rape is reprehensible.

Why did the plot require Sue Digby to die? The writer could have put her in intensive care for several months, with the same effect on the plot. Elongated Man would still have suffered and the same investigation would have been done.

DC felt so bad about this idea that one of the objectives of the weekly 52 series was to reunite Sue and Ralph. So they became ghost detectives together, which was not used much and just removed both great characters off the chessboard. Gail Simon even ignored Sue’s death and introduced both as characters in her latest Secret Six, so the murder did not stick. So why do it in the first place?

The rape especially was not needed for this murder mystery. It was inserted just so the Justice League can be seen as hypocrites on justice, reducing them to lawless Vigilantes.

The murder of the father of Tim Drake was cruel and robbed the character of his uniqueness as the only Robin loving with a living, good active parent.

Captain Boomerang was killed as well. How does that add to the terror campaign of harming the loved ones of the super heroes?

I do not believe that Deathstroke could have defeated that many Justice League members. They know how to fight as a unit and not get in each others way. I don’t even understand why that scene was necessary anyway. It was not necessary for the plot and It added to the idea that they were incompetent fools.

Zatanna had never been able to perform delicate brain surgery before this, but it was needed by the plot, so she can. Her magic does not work that way. It is physical not mental. How did she learn to do that anyway?

Love it. I think it captures the voice of characters well and does a great job providing an intriguing mystery, epic battles, character drama, layers to older generations of comics and plot twists. It’s a thrill ride.

@BatWatch
It’s interesting that you think the book captured the characters’ voices. I found it to be a rather poor characterization of most of the JL. Which characters did you think it did really well?

Love it, mostly for the looks and glares everyone exchanges with each other. These best of friends begin to not like each other because of the circumstances they find themselves in plus the hypocritical Superman and the timebomb that is Batman when he figures this out.

I absolutely loved the experience of reading it month to month, analyzing every issue and discussing clues and theories with other fans. But I was incredibly disappointed in the killer’s identity, and I’ve never gone back to re-read it so I’m not sure how it would play for me today.

Being a Crisis book, it spends a little bit of time with a whole bunch of different characters, so it’s hard to pinpoint many who got a huge portion of the spotlight. Green Arrow is our perspective character and he’s abrasive, opinionated and confrontational yet motivated by concern over others. That’s pretty classically Ollie in my book. Elongated Man before Sue’s death is a devoted husband and light-hearted down-to-Earth adventurer. Off the top of my head, I don’t recall any characters being out of character.

I like how most of the B-list characters that are focused are represented, and the whole “League within the League” thing was handled. While the death itself was problematic, the fallout to it, such as the funeral, is one of the best scenes I’ve read in modern DC. The whole moral question around changing Doctor Light was an interesting one and had far more nuance and actual shades of grey than other stories around that time trying to do such storylines, such as Civil War. Finally, this is by far the best work that Rags Morales has ever done. He draws some beautiful work, and it’s absolutely his magnum opus.

All that said…the rape of Sue Digby is so unnecessary it borderlines on the misogynistic. I could understand some violence inflicted on her is necessary to push the plot of Doctor Light knowing their identities and willing to do anything to hurt those they love, but rape…using that kind of violence is kind of a nuclear bomb for that kind of storytelling, and it’s one that I think needs to have the character be the focal point of the story, seeing how she recovered and moved on, not as a random detail on a character who’s dead by issue 1.

(As an aside, it also did terrible things to Doctor Light as a character. I can understand wanting to beef him up and make him a more credible threat, but doing this basically turned him into Doctor Rape – a creepy, leecheous, disgusting character that I just didn’t want to see around. One of the things New 52 did right was completely change Doctor Light to get rid of that stuff.)

But more than that…what they did to Jean Loring was even worse. Completely destroying her character just for a random twist, and making her look the epitome of the misogynist idea of an unthinking, psychotic woman.

And finally…that Deathstroke fight is complete shenanigans. SHENANIGANS. Deathstroke should be one of the most formidable enemies in the DCU, absolutely, but he shouldn’t be able to take on basically the whole JLA in one go that easily. No. That’s just complete fanwank.

So…yeah, some stuff to like, a lot of stuff to dislike…I’m not sure how well it washes out, but needless to say, it’s not Meltzer’s best work he’s ever done in DC.

(Also, I would like to be commended for ranting without using one swear word. THAT WAS A TITANIC EFFORT.)

@mrmiracle
I think as it was coming out it was engrossing, but I felt that it was so in a way more akin to Basic Instinct as opposed to (John Carpenter’s) The Thing, if I can make a movie reference or two. The way the plot resolved made no sense. Not only did it seemingly ignore earlier events, but it was also poorly explained and poorly paced (ALL of the big reveals coming in the final issue). Also, it had a largely negative effect on the DC universe of the time, which I don’t think can be ignored. Also, @Wildstorm-Jeff, I don’t really like it when superheroes turn on each other because of “gritty realism”, or what I like to call “The Watchmen Effect” (real-life psychology applied to fictional characters whose purpose is to inspire with the intended effect being to make all parties involved depressed to give the illusion of depth).

@BatWatch
Okay, fair. I’ll give you that Ollie and Ralph were written fairly on point. I’m talking more about characters like Zatanna, Batman, and above all else, Superman, who were written as not insignificantly more deranged and short-tempered than what I would consider their typical selves. There were others who I wanted to mention but I can’t remember and I don’t really have any interest in going back and reminding myself.

@Jay_Kay
I think that I agree with you on every point you listed. The funeral was a good scene, and the B-Listers and C-Listers in the League were rather enjoyable when they showed up. I don’t love the funeral as much as you, but I definitely like it and it’s easily the best scene in the book. As for the comments on Doctor Light, the rape, the Deathstroke fight, and Jean Loring, I one hundred percent agree. And, one last positive note, in no way am I arguing against Rags Morales’ art on this book. It looks absolutely incredible the whole way through. The faces, the poses, and everything else, really, is all on point.

I hate it and love it at the same time. The writer manages to tel a really compelling and satisfying mystery, but the death and especially the rape of Sue Dibney was going to far and done only to shock people into buying the series.

I was not a fan of the story. I won’t actively say I hate it, but it’s not one I revisit when I’m looking for something to read. Sue was a great part of the JLE book and I loved her relationship with Ralph. When the incident happened, I felt it was done for shock’s sake. The mystery was underwhelming which is unfortunate because for a while, that was the hook of the mini-series. It was also another case of Batman being right while every other hero is in the wrong. Even by this point in comics that was becoming old.

I can point to this and maybe even Hush as the point where DC started going down a darker path. For a while DC was progressing with some really good stories, legacy characters and forward momentum on the universe as a whole. Right around here we started bringing heroes back from the Silver Age mainly because that’s who the writers wanted to write about. We started focusing more on the creators than the stories and anything done for shock value was praised over storytelling. Identity Crisis and Hush were the catalyst for an era of DC I’m not fond of.

I like it. It’s a good “who done it”. I think the rape of Sue did serve a purpose. Dr Light has generally been considered a laughable, nearly bumbling villain. If it had been the Joker or Two-Face or Metallo, or Reverse Flash, it would have been a shock value. The fact that it was Dr Light demonstrates that cruelty and violence from a villain should never be underestimated. Even C-list villains are capable of vile, horrific acts of violence.

Comics create a nearly celebrity leveling structure for villains. A list, B list, C list, etc. the truth is more complex and the ability to be truly vile and and brutal can manifest in many forms, some of which are lines you wouldn’t think someone would cross. However, as we have found with serial killers & serial rapists, they are often unassuming and coworkers/neighbors were shocked that Jeffery Dalmer, for example, was one of the most prolific serial killers in history.