I Want Harley Quinn to Be the New Wonder Girl

Unpopular opinion: I want Harley Quinn to be the new Wonder Girl. I just read Wonder Woman: Agent of Peace when it came out, and thought that the dynamic between Harley Quinn and Wonder Woman was amazing. I know she’s a bit old to be a sidekick, but she was the Joker’s sidekick/abused girlfriend for years. Wonder Woman is kinda boring, but Harley Quinn made her way more interesting and Harley Quinn even expressed interest in being the new Wonder Girl within their team-up. Cassie whatever her last name is is really lame and I haven’t even seen her in anything in a couple years, Harley is awesome and would kick ass and revitalize Wonder Woman.

. She has a variant as Harley. She’s practically in every multiverse, due to her shoot first and ask second mentality

I agree that the team-up between Harley and Wonder Woman was fantastic in Agent of Peace. I really enjoyed that story and the contrast between them was so fun to read and see. The catapult scene had me laughing and the ice cream deal felt like something a parent would do with a child, or a mentor with a mentee.

The Agent of Peace books have been my favorite of the Digital First title so far and they’ve got to incorporate more Harley in there - it was too good for a one time thing.

Uh, I wouldn’t go THAT far, but Harley interacting with Wonder Woman is pretty fun.

If you want more of that, especially from that creative team, I’d check out Harley’s Little Black Book #1, which is a double sized WW/HQ team-up…kinda. It’s really fun. 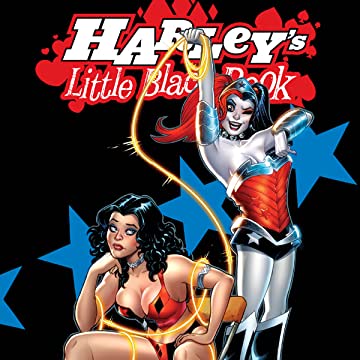 I have an idea. Why don’t we stop trying to shove Harley into everything? Yeah that sounds good to me. Wonder Woman doesn’t need a “revitalization”. She could use artists that aren’t gonna white wash her and good writers that can balance the greek mythology with the “real world”/non mythology based foes but that’s it.

The thing about Harley is that while she has a lot to learn from Wonder Woman, I think she’s done existing in other characters’ shadows. She’s destined to be her own woman.