I met Matt Rosenberg at a signing (AMA maybe)!

So, I did something pretty cool this past Sunday.

Matthew Rosenberg, writer of Task Force Z, DC vs. Vampires and most recently, the newly-launched WildC.A.T.S series, came down from NYC (with Black Mask Studios co-founder Matt Pizzolo) for a one-hour signing at the Ultimate Comics store in Cary, NC. And I attended it! 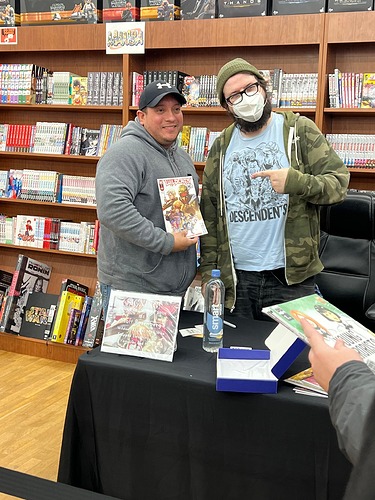 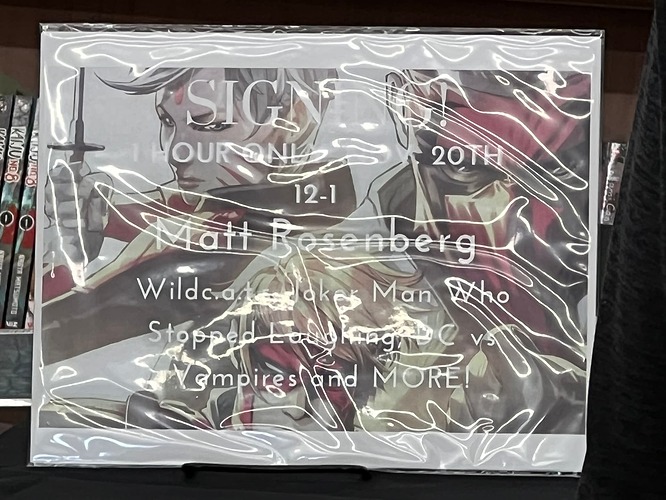 As you can tell, incredibly nice dude and VERY gracious with his time (he did a full-on sketch for one of the first in line).

Now, I didn’t want to take up too much time (had to keep the line going) but I did ask him a…question of sorts. To which he gave me a pretty solid answer.

If you want to know what he told me, shout it out in the thread below and I’ll tell you. But otherwise, fun was had (however brief).

Also has to be said: we nerds here in NC are coming up on 3 years without NC Comicon. So…even I was taken aback by how much I needed it.

(If you live in NC and you’re looking for a comic shop to frequent, I give Ultimate Comics my highest recommendation!)

Wild, man! Sounds like you had good time and that Mr. Rosenberg’s a good dude.

I did ask him a…question of sorts. To which he gave me a pretty solid answer.

If you want to know what he told me, shout it out in the thread below and I’ll tell you.

In the words of Irina Spalko, “I want to know. All of it!”

Yeah, I had a fun time of it! Again, it was brief but Matt was nothing short of lovely for that time we interacted.

So, if you’ve had the chance to read the new WildC.A.T.S #1 (not gonna spoil it here, don’t worry), you might have noticed on the cover that there is a ‘limited series’ tag on it.

That’s not supposed to be there…for the most part.

Matt had noticed it was there as well when he got the comps for it. He (like I assume a lot of readers did) thought they had announced WildC.A.T.S with the intention of it being an ongoing series. In fact, he was already scripting the 7th issue when he called DC up to talk about that.

DC editorial’s response was something to the effect of: “Oh. Whoops!”

So anyway, the series is still ‘technically’ an ongoing but as Matt explained to me, DC nowadays likes to plan their books and events in rough six-month outlines (think ‘seasons’, basically).

If I remember correctly, Matt does have at least 12 or so issues outlined, obviously with plans beyond that. He does have a contingency plan in case he actually doesn’t get beyond six issues. He understandably couldn’t elaborate any further beyond that there are…certain other ways in which his WildC.A.T.S stories might unfurl if the sales don’t support an ongoing in the long-term.

TLDR: that ‘limited series’ tag on the cover of the first issue is a mistake…but we’ll see what happens!

if you’ve had the chance to read the new WildC.A.T.S #1

I have! As an ardent WildStorm fan, I enjoyed it (and created this thread for discussion of it).

you might have noticed on the cover that there is a ‘limited series’ tag on it.

I did notice that!

Like you said, WildC.A.T.S was announced as an ongoing, so when I saw the LS branding, I sat back and thought “So…something changed, then?”

DC editorial’s response was something to the effect of: “Oh. Whoops!”

Mistakes happen of course, but that’s a pretty big one and really should have been caught beforehand. I suggest they hire an additional proofreader, of which, I can start immediately if you’re reading, DC.

I’m hoping for the best. Hopefully, the mag will bring new fans into the good ship WildStorm.

we nerds here in NC are coming up on 3 years without NC Comicon.

There is the Galaxy Con though. I’ve been to it and done some volunteer work with GC before various places including there. It’s a little too loose with keeping it nerdy most of the time (wrestlers and Barney the Dinosaur show up) but there are still lots of comic book stuff. Want to say there’s another one somewhere out there too but I’m already outside my jurisdiction.

I’ve been aware of GalaxyCon for sometime, actually! I almost seized upon an opportunity to attend this year but timing and other personal things kinda scuttled it.

From what I know of it, it’s definitely more slanted towards TV/movies. A lot of their headliners this year were TV stars, VO actors and wrestlers, so you kinda had to sift through that on the website to find the comics talent that were going.

But yeah, It still looks like fun. I’ll definitely go next year if the planned NC Comicon return doesn’t materialize.

As far as others, I know about HeroesCon in Charlotte. That one has to be a good time, cause they get a frankly absurd number of talents to come there every year. Would totally go if Charlotte weren’t a three-hour field trip from where I live

(wrestlers and Barney the Dinosaur show up)

Does Baloney The Dinosaur show up?

Some kids from the WB lot are asking.

They tend to not go obscure that often. It’s mostly pop culture con with a back corner that is comic con but that back corner is cool let me tell you.

It’s mostly pop culture con with a back corner that is comic con but that back corner is cool let me tell you.

Of course! No pop culture convention of note is complete without comics representation.