I just found out Joaquin Phoenix was on The Adventures of Superboy!

I just found out that the future Joker, Joaquin Phoenix previously appeared on season 1 episode 20 of the Superboy TV Series. (which is available here on DCU if anyone didn’t know)

He played a boy genius who befriends Superboy/Clark and even donned a Superboy suit in a dream sequence. It was season 1 of Superboy so not a stellar episode, but still cool to know he had that kind of ties to DC Comics adaptions before. Starting to thinke veryone was on a DC TV show/Movie at some point.

Just goes to prove – you either die a hero, or live to see yourself become the villain. 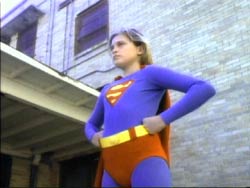 Adding on to the crazy train, because of today’s DC Daily, I learned that Jackie Earle Haley (i. e. Rorschach in Watchmen) was on an episode of the 1974 Shazam! TV show - the same one that is now here on DCU! (The episode is ‘The Delinquent’).

Sorry for hijacking, Dan - but this seemed to be a good place to share my amazement.

I remember that episode of Superboy. I saw it when it first aired. When they aired the rerun I had just seen Parenthood and I was so surprised to see he was in both.

His best TV appearance ever was on Letterman when he was in character from a then upcoming movie (I think it was “I’m Not Here”, but don’t quote me).

The comedic awkwardness between Dave and the future Mistah J was priceless.

@Super-Squirrel No hijacking at all, and didn’t know about Jackie Earle Haley, that is crazy.