How would you improve Jared Leto's Joker

I know y’all don’t like him. But this is a thread to come up with ways to improve him, and make him into the Joker we all know and love. Because, let’s face it, we need a good Joker to fight a good Batman. I would like it (Since Jared has the same body type as the Joker in the Arkham games) if the made him start dressing like that Joker. Also, the laugh needs to change.
If they grow his hair out a bit longer, he could pull it off. That is the best thing I can think of, if they changed Jared’s Joker. Y’all have any ideas? 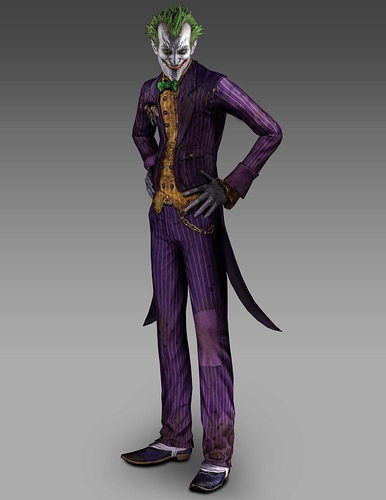 I liked him. I’d give him more to do than just be Harley’s escape ticket.

I’m not sure they can improve that version without starting completely over. They made him too much like a modern type of gangster. He didn’t make jokes, or use amusing weapons, or do anything clownish. He was obsessed with Harley, to the point where she was more than a henchgirl/possession/partner in crime. It was too “romantic” which I put in quotes because it wasn’t even THAT romantic, and it was still TOO romantic. I mean, in Harley’s delusional mind it can be as lovely and romantic as she wants, but in the reality of Joker’s feelings for her there should be some major changes there. I always imagine Joker being that 1940’s type of machine-gun toting gangster like in Batman the Animated Series, no matter what year the story is set in. Like he won’t change from being a homicidal maniac clown who’ll throw a rubber chicken with a bomb in it, even though it’s a modern story. I needed more of that Joker, and less of Leto’s not-Joker thingy.

But…he had a tattoo of a smile on his hand, and…he…put it over his mouth to indicate…

Yeah, iJest’s got the beat.

Yeah, he definitely needs to be more clownish than he currently is. That is why he needs his suit and he needs to get his gimmick back.

“How Joker Got His Gimmick Back”

Make him violent and unpredictable. Cut his face off and tie it back on.

…or recast him altogether.

He was a good Joker

I was willing to give him a chance if his chemistry with Batman was good but we never got to see them interact other than a brief scene in suicide squad.

How to improve? You don’t lmao.

No tattoos, ears piercing and metal teeth and he would be fine in my opinion.

By sitting in on his audition and saying “Next!”

I would start the movie with SS’s Joker in confinement in Arkham. He decides it’s time for a new Era and makes the transformation into a new Joker persona (according to Grant Morrison’s logic) as he raises carnage to escape. In the process of transformation, he violently burns or rips away all of the ghetto- fabulous accoutrement from SS. But as he takes on the new persona (let’s say Joker as Youtuber), he can’t hold Gotham at attention. He sees that one consistent persona can no longer create the type of mayhem he craves in our fractured society. So, every day, he begins in a meditative state out of which he chooses a new Joker persona. We allow Leto to play all of the Joker’s in history and some new ones, as the Joker gang struggles to maintain consistency in his wacky plans day to day. Batman tries to contain him, but the Joker is more unpredictable than usual. So the Joker succeeds in getting Bats to change his personality in order to adjust, which sends the Joker into an absolute tailspin identity crisis and gets him recommited at the end of the movie. The movie is simply called, Wild Card.

I think Leto is a great actor, just the Joker in SS was a horrendous choice. Let him do them all.

With a crowbar to the skull!

I’m pretty sick of the Joker. Would like to see less of him in the future in general.

I liked Jared Leto’s Joker. The only things I didn’t entirely like was the growling, the damaged tattoo, and the silver teeth. I’m fine with the rest of his tattoos and his overall look. He also felt like the Joker to me. He really didn’t have enough screen time to really give people a taste of his Joker.