How The Suicide Squad Sets Up HBO Max's Peacemaker (Spoilers!) 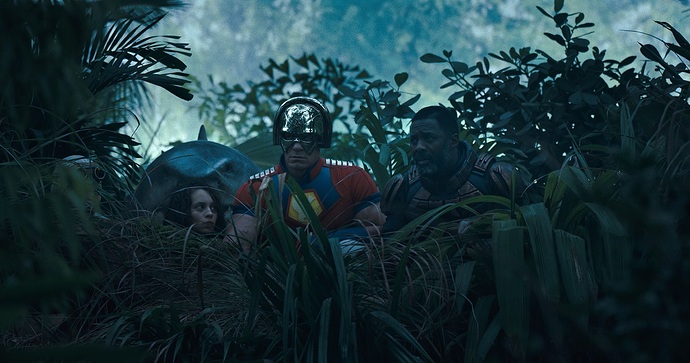 Those were Rick Flag’s dying words after Peacemaker stabbed him in the heart. This moment, which occurs during the final act of James Gunn’s The Suicide Squad, was a turning point for John Cena’s Peacemaker. While his Task Force X allies chose heroism, Christopher Smith stuck to blind allegiance. If you’ve seen the movie (and if not, you’d better get on that—it leaves HBO Max next week), then you know what happened next.

Bloodsport shot Peacemaker, critically injuring him. Of course, it takes more than a bullet to the neck to stop the mighty John Cena, and sure enough, the post credits scene revealed that Peacemaker had survived and Amanda Waller has special plans for him.

If The Suicide Squad was a cinematic feast, then that post credits scene left me hungry for another course. The good news is James Gunn and John Cena will be reuniting to continue Peacemaker’s story with an HBO Max television series. How will Peacemaker continue the story when it premieres in 2021, and what can we expect? Gunn and Cena are keeping us in suspense, but if we’re curious about what we’ll see in HBO Max’s Peacemaker , some of it is laid out in The Suicide Squad .

To learn more about the upcoming HBO Max series surrounding Peacemaker, head over to DC Comics!

Have you checked out The Suicide Squad yet? Let us know in the comments below!

I thought the Suicide Squad sets up Peacemaker to get shot in the neck and die for being a wretched human being. If Peacemaker lived through blood gushing out of his neck in a crumbling building where no one is going to be fetching him in the next few hours, you might as well have Mongal turn up in the hospital bed next to Peacemaker, recovering from her burns. And TDK - he just got shot in the arm(s), so he’s ecovering in the hospital bed next to Mongal.

Well it is comics after all, so nobody really stays dead! lol

Plus the weasel didn’t actually die either! They should rename them the Zombie Squad!

I thought the hard drive contained information that implicated either Peacemaker or someone he cared about, thus he was desperate to keep it from being made public.

With only three months left in 2021 this can’t be far away so I’m looking forward to it! Hopefully The Suicide Squad is back on HBO Max before thus debuts so I can watch them back-to-back!

Now that James Gunn is pointing out that TDK didn’t die, and also pointing out that we’ll get to see one more un-named person from the Suicide Squad movie in the Peacemaker show, that must be TDK or Weasel, and TDK is probably more sensible of the two for a TV series

A girl can dream?

Hey, good idea! The whole Peacemaker show is just a series of dreams by a comatose character

I’m excited to see what they do with the team at HQ in peacemaker. I liked the workplace comedy aspect.