How is Tim Drake Robin again?

I never found out how Tim Drake became Robin again, and I can’t find answers online. Can someone help? 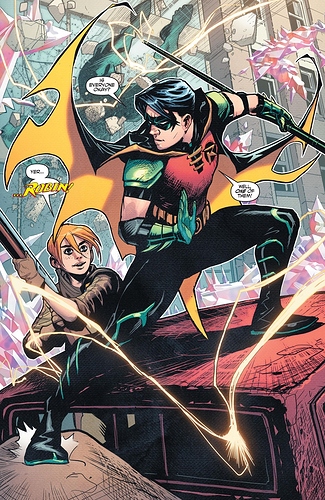 I saw somewhere that he was getting a new name in July from Bendis in the Young Justice series. So maybe he just Robin for now?

Im not up to date on Bendis Young Justice series but I hear its one of DC’s best titles right now.

He took back the Robin identity in the Teen Titans Giant series. It hasn’t been explained why, but that series debuted before the current Young Justice book.

@Vroom So is Damian not Robin anymore, or do we have multiple Robins?

Damian is Robin in the current Detective Comics.

Going from Red Robin to Robin is likely just a shortening to hold over until he gets another name (or possibly a bridge for new/returning readers to meet a Robin before changing to a new name. I think that people will generally recognize Robin and Superboy, possibly Wonder Girl and a Lantern, and get pulled into Young Justice. If Tim immediately showed up as some other character, then he/the book, may not have had the same recognition level. Just a guess, since the name appeared in volumes targeted at a wider/newer audience.

It should also be noted that the story in the Titans Giant doesn’t really seem to gel with current continuity at all.

@Jay_Kay That’s right. Tim seems to be leadng the Teen Titans (or Titans for the last four months) but that’s certainly not the case in the regular Teen Titans book or Titans before it concluded.

In any event, there are currently two Robins right now. Tim in TT Giant and Young Justice, and then Damian in his books.