Being too busy is my middle name! I have just finished working 13 days in a row. I am off tomorrow and I am not answering the phone if I see work is calling. My plans are to read some comics and get in some much-needed relaxation. Being honest, I think this club is one of the few things that keeps me sane.

Also, our books won’t change until Thursday so you have a little bit of time!

You can do it!

As I typed the words “…we will be taking a closer look at the Halloween Special.” I knew my work was cut out for me. Will I have the time to dig through the entire DC comic book history to find a definitive answer? Once I asked myself that question, I came extremely close to deleting those fated words. The easy out is to just look at the comics with titles like DCU Halloween Special or perhaps Wildstorm Halloween Special. However, sometimes the easy way out isn’t the most fulfilling. The gears in my head have been spinning since Monday. The main question I keep asking myself is what was the first DC comic to feature Halloween? Then something happened along the way in my many Google searches. I got a bit off-topic but stay with me for a bit.

Comicbooks have been a big part of an annual Halloween parade in Rutland, Vermont. The inspiration is so big that the parade has been featured in both DC and Marvel books and is the catalyst for the first DC/Marvel Crossovers!

Following the first Rutland Halloween Parade’s lackluster showing in 1959, a motivated Tom Fagan went to Rutland’s Recreation Department, where – as he later remarked to Alter Ego magazine – communicated, “We should have a theme for this. Because it’s Halloween and these are creatures of the night, you should have Batman as parade marshal to lead off the parade.”

If you clicked the link you will also see that Marvel beat DC by featuring the parade in a comic. DC wasn’t far behind when they released Batman 237 in 1971. 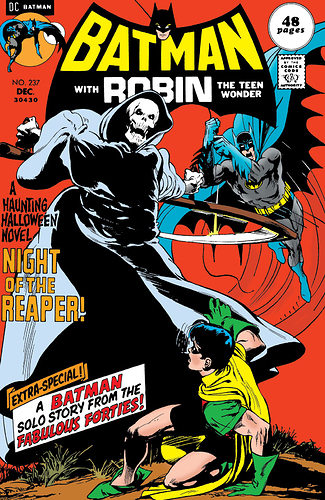 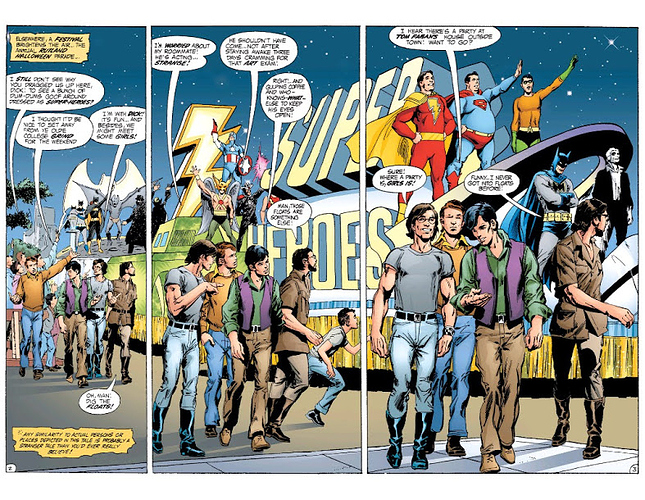 image787×610 439 KB
You might notice a certain superhero costume that is not DC sanctioned in this picture, I know I spotted it instantly.

In Justice League of America 103 released in 1972, Justice League visited Rutland for the parade. It should also be noted such real-world DC Comic employees such as Len Wein made appearances in this book. 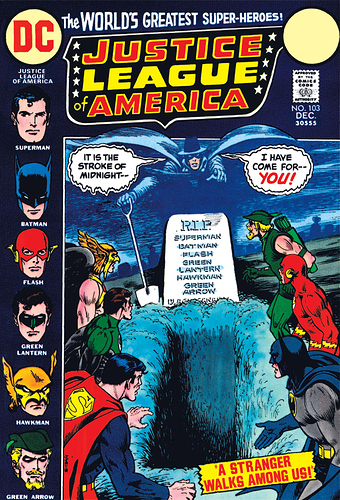 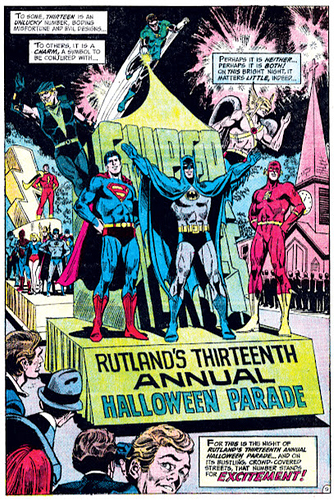 The comics from both DC and Marvel that featured the Rutland Halloween Parade had characters from the other company making an appearance. Of course, this would only lead to these creative minds wondering if they could do a crossover.

To get back on the topic of the Halloween Special. At first glance, it appears the first Halloween Special on DCU is not even a DC title! In 1997 the comic shelves saw Wildstorm Halloween Trilogy of Terror. The interesting this about this book being on DCU is that at the time of release, Wildstorm was an imprint of Image Comics. Of course, as we all know Jim Lee is the man currently running DC Comics but that wasn’t always the case. In the early 90s, he joined up with other creators to form Image Comics. Throughout time, the imprint was later sold to DC. I could go deeper into the history of Image and Wildstorm but I don’t want to get too off track. 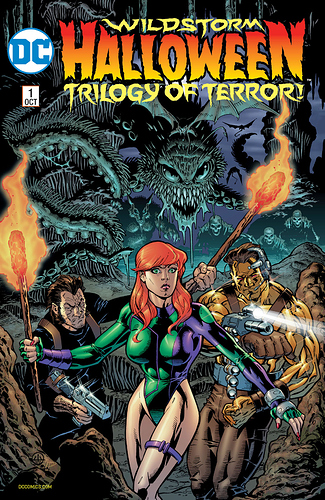 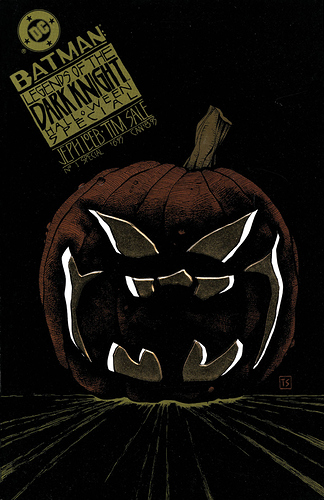 The next time we would see a Halloween Special appear was in 2007 with the Infinite Halloween Special. Oddly, this title is not on DC Universe at this time. The cover promises “13 Tales of Terror!” and seems to follow the format of the books we have read this week. The tradition of the Halloween Special lasted until 2010. Yes, more Halloween-themed anthology books have been released since then but the titles have changed over the years ranging from Comics Calvacade to DC House of Horror to Secrets of Sinister House. 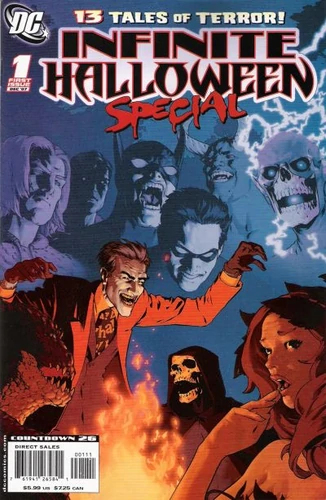 If anyone happens to know the first DC Comic that featured Halloween, I would love to know! My research obviously took me elsewhere but that question still lingers.

Protip: You might want to hold off on that one for another week. I have a weird feeling we will be seeing it here just before Halloween.

Those magazines look amazing! What is Twomorrow, like a digital magazine thing? If so I might be jumping on there and getting a magazine.

I’m gonna need to check out that JLA issue. I’m always interested in the history of comics so thanks @darkstarz.

I don’t know the first DC comic to feature Halloween but there are covers out there that are Halloween themed such as Comic Calvacade #12 which came out on September of 1945. Here’s the cover but since it could be offensive I feel a content warning is in order. 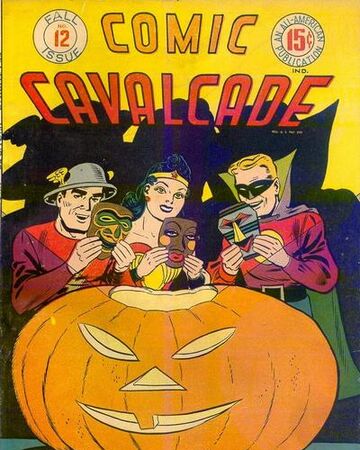 @dogwelder9 that sounds really cool. I’ll have to check it out.

That is amazing! That middle mask…well I have a feeling that book won’t be on DCU anytime soon. Like you, I am interested in the history of comics. I am not sure if you have clicked the link that I provided for Comics Alliance, they go deeper into the parade by including the Marvel books at the time that had DC characters in them. It was an excellent resource in pointing out key issues that I have mentioned here. Furthermore, I am sure you are aware but I do like mentioning other clubs when applicable and DC History Club ran by @msgtv and @TurokSonOfStone1950 has been an inspiration for these little write-ups. I don’t have nearly enough time to write as much as I want on each subject, which may be for the better so we can return to some topics in the future.

I did find some other comics of interest ranging from DC Super-Stars that actually had the words “Halloween Special” on the cover but it wasn’t a one-shot or anything like that to some random team-up books, which we will be covering at least one of them in our future.

I’ve only read a few issues here and there myself. I was planning on covering some of them over at the JSA Book Club but stuff from the Golden Age didn’t go over to well in our first discussion so I dropped the idea.

stuff from the Golden Age didn’t go over to well

This is sort of a surprise but maybe not. I have noticed in HoH that the older books seem to be popular as well as the newer books. Maybe it is a different crowd? Either way, I definitely appreciate everyone going along the weird ride here as I try to mix up eras as much as possible.

That is very true, still, I am a fan of that set up. I think that is one thing that House of Mystery sort of borrowed from that era, at least the anthology aspect. I know it was a different beast but the idea seems to be there. Hmm…perhaps that can be a future spotlight, the history of the anthology horror comic. Also, that seems like something that will be in parts as opposed in one entry.

Maybe it is a different crowd?

It could be that or perhaps the genre of the comics themselves. Golden Age comics are a bit verbose so that is likely another issue. That being said I may try some Golden Age stuff at the JSABC again at a later date and see how it goes.

Either way, I definitely appreciate everyone going along the weird ride here as I try to mix up eras as much as possible

That’s what I like about HoH amd what makes it unique.

Typically All-Star comics consisted of several chapters, each dedicated to a different member

All Star Comics was basically an anthology book of reprinted stories from other comics. Those chapters were stories that appeared in the members individual comics.

That middle mask…well I have a feeling that book won’t be on DCU anytime soon.

It doesn’t seem impossible. I know a while back when DC was going to publish an omnibus of Golden Age Wonder Woman, there was calls of banning it or editing the original pages because it included some blackface and really bad racial stereotypes. Ultimately it was published with a warning, saying that it was unedited, not as an endorsement, but to try to hide and edit the blemishes in history is foolhardy and damaging.

Would that happen today? I’m not sure, but like I said, not impossible.

I have noticed in HoH that the older books seem to be popular as well as the newer books. Maybe it is a different crowd?

I mean, I was/still am in both but I just think Bonze Age books read better typically than Golden Age.

I enjoy reading both but for different reasons.

For me reading the Golden Age stuff is about learning a character’s roots. Where they started from. How their original creators envisioned them. How those stories are very much a product of their times just as all comics and other media are. That sort of thing.

Its also about seeing the evolution of the medium itself and how views on certain races and nationalities changed in comics to reflect the change in attitudes over the course of decades.

I think I have been able to track down the first horror comic!!!
Eerie Comics 1 (one-shot) was released in 1947. I will keep digging for the first DC one but now I have a starting place! 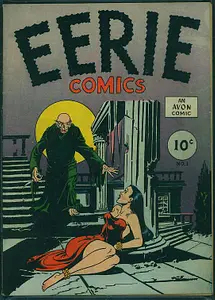 Joe Kubert worked on it which is actually pretty cool.

I’m really enjoying learning all this. I haven’t read a lot of horror comics.

I have never taken a deep dive into the history of horror comics before. I have done the surface stuff but never looked for specific stuff such as the first horror comics and to add it by a certain publisher really makes things a little harder.

True enough – I’ve read a bit of the Golden Age Batman as well and liked those well enough.

I think length can also play a factor. Those All-Star issues were all like 80 pages long, I remember, that’s a LOT of Golden Age Comics to go through.

Excellent!!! I will be messaging you soon once I figure out what the topic will be next week. I know the books that we are reading but the brief write-up hasn’t been pinned down.