Wowsers! I just finished JLA/Spectre: Soul War and enjoyed this heady tale. The first thing that I noticed was how great the art was. I am guilty of really digging 90s comic book art and Soul War is a perfect example of what I crave.

The story was unbalanced, especially in the first half of part 1. I am sure everyone has had the experience of pressing play on a brand-spanking-new album from one of your favorite bands and it just doesn’t vibe with you. Then about halfway through the album, you see the potential and by the end of the album, you dig it and want to listen to it again with a different perspective. Once I got through the first half of book 1 is when things started to click in the same way a new album from a much-loved band. By the time I got to book I was all in. Maybe this Megazord version of JLA and Spectre had something to do with it. 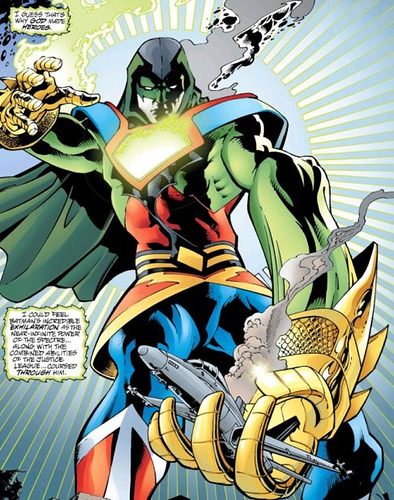 Things only got trippier from there and the horror soon followed and those horror scenes were definitely there. The idea of an alien species collecting psychics to take over the world is definitely early to mid-90s b-movie horror. Throwing in some of the world’s greatest superheroes is a stroke of genius. 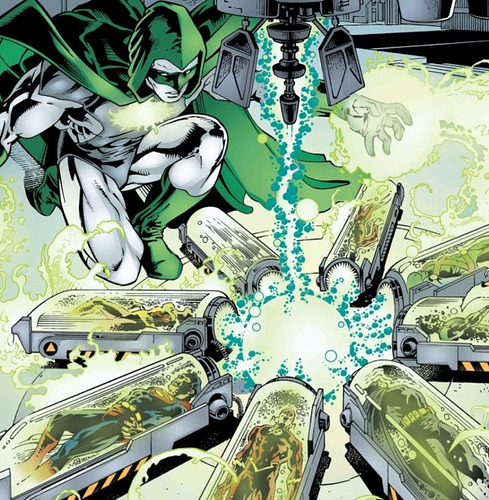 image603×616 170 KB
This scene is definitely cool and wreaks of Flatliners without the made-for-film science. 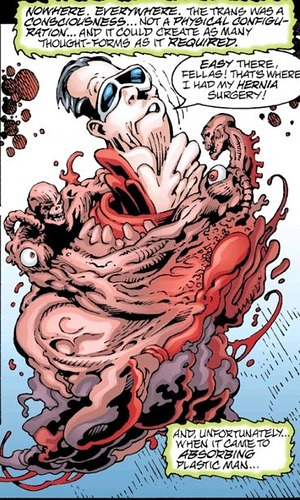 image369×615 116 KB
I can’t say I was expecting body horror in this comic but maybe I should have been considering Plastic Man was on the JLA. 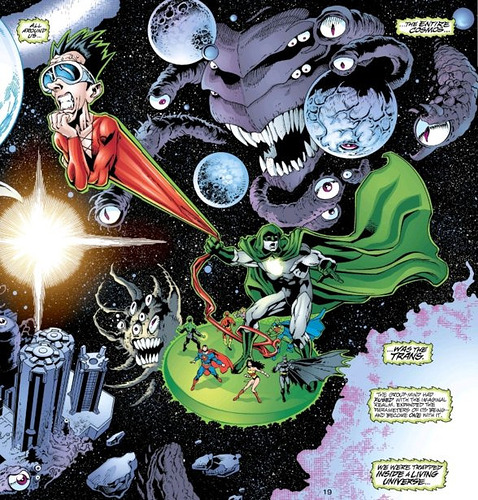 image589×615 184 KB
This is just great-looking monster art with hints of psychedelia.

The ending was pretty excellent and I can see many Batman fans really digging it. This is a book that isn’t very popular and often forgotten or overlooked but maybe it shouldn’t be. I want to thank @Vroom for pointing me in the right direction as I would never have found this.

What did everyone else think of this story?

While I am on the community often I don’t really explore it as much as I probably should. Great to have you here and I hope you enjoy your time in the House of Horror!

I have a question. Are the Hill House books connected? And in an order that should be read?

This is gonna be a weird answer. They are not connected but they are connected. Now for the explanation.

Plunge is not connected to Basketful of Heads or Daphne Byrne or Dollhouse Family. However, there is a back story that is connected. @hashtag-goodtobejo at the Black Label society has made a reading order for Sea Dogs.

We are not really focusing on that story in the House of Horror as we have been focusing on separate titles by themselves and not in release date reading order.

That is awesome, thank you. I plan on finishing Basket Full of Heads this week. And as I will navigate this group. For some reason I can’t login to the community on my phone so I am limited of when i can get on.

You should contact the help desk folks about that. I know it will go to your browser and then you have to sign in from there. I can’t wait to read your thoughts on Basketful of Heads!! I know there were some people here that would normally not read that title and really enjoyed it.

I set a goal of reading one book a month this year, which has cut into my time for comics, but its something that I wanted to do and with that I am reading Stephen King’s Dark Tower series. All of that is to say that I am really excited to read Hill House and specifically Joe Hill. I have a huge list of things I am working through but Hill House and books in this group are certainly going to find their way into my evenings.

Ok, so I finished the books. There was some stuff to like and a lot that I couldn’t get into. The League was brought together to handle a problem, the Trans, an extra dimensional entity that consumes the thoughts of planets inhabitants. I think I got what the trans were supposed to be but by the end I didn’t really care.

This is another team book that feels more like they were on a committee rather than a team. They voted whether to handle the issue that came to their doorstep. When it came to working together they just did their own things when they got into it and occasionally watched each other’s backs. I feel like the Harlem Globe Trotters work more like a team than these guys. There is no game plan there is no coordination, outside of Batman making ultimatums.

Speaking of plans. Why didn’t they leave someone behind to guard their bodies? Krypto, a robot, anything?

I know of Hal Jordan from movies and new 52 and I heard about the Parallax storyline but why on earth did they make him the Spectre. All he did was whine and run off by himself and get himself in trouble at every turn. At least Jim Corrigan knew what he was doing.

It felt like he brought the Justice League together to fix this problem because that was all he thought to do. He gave them no training on what to do, not that Hal knew what he was doing anyway. I get that they are used to improvising but they weren’t equipped.
Maybe a team with a little bit of magic or telepathic training would have been nice.

I feel like Martian Manhunter was WAY under utilized in this story. As with most stories that involve Batman he becomes the center of attention and ends up overcoming the obstacle with his tragic history. I’m sorry but Martian Manhunter is 1.) A telepath, he should have been right at home in the mental/afterlife and 2.) his tragedy is way worse than Batman. He lost his whole freak’n planet including family while he was an adult. If anyone has the will to go on with their life I’d think it would be J’onn. But he ends up getting transfixed by the Trans

Going back to Hal, why is Batman out willpower him. He was a green lantern, supposedly one of the universe’s best for goodness sake. Their job is to utilize willpower and imagination. Between that and the fact that he had the Specter’s powers he should have been able to do the job alone.

I liked that Plastic Man got his three panels of glory but again a character who their whole powerset lies in their imagination and he get’s taken out almost immediately after standing up to the Trans.

I can just keep going on and on, but at least the merged Justice League was kind of cool for that one panel.

Regarding Hal Jordan, this was during his redemption tour. After Zero Hour and the whole Parallax thing, the Spectre was almost a logical step.

I agree that they could have had someone protect their bodies while they were doing the Flatliners thing but I am not sure even a robot would have been useful against the Trans.

How do i find threads for some of the older stories, for example Basketful of Heads?

I have a library of every topic on the main club page. Some of the titles will point you in the right direction.

Plunge will be HoH 12 and I think and if I am right Basketful of Heads is HoH 13 (Frightening Valentine).

I’m late, but I finished up JLA/Spectre: Soul War. Overall pretty decent stuff – JLA at the time was always dealing with stuff that was borderline metaphysical, and this keeps up with that tradition. The Trans as antagonists were interesting, though they really couldn’t be called that nowadays without DC getting some massive heat.

I forget who it was who complained about the Batman usage, but I can kind of see it. While he and Hal definitely have a lot of drama that makes for some interesting interactions, J’onn is probably a better fit for the sort of antagonists they were going after. It was cool to see Kyle get a big of a spotlight during the second issue.

I want to thank @Vroom for pointing me in the right direction as I would never have found this.

You are most welcome. Happy to be of assistance!

What did everyone else think of this story?

Truth be told, while I’ve known of this story for years, I actually hadn’t read it until just a few days ago. Like you, I wasn’t expecting the body horror but it meshed well and never felt gross or out of place. Overall, a very solid read.

I agree, the body horror never got to Cronenberg levels of grossness and it was fitting with the story.

I also recently finished Plunge and overall I really liked it. Similar to Basketful of Heads, it did what it set out to do with a sort of The Thing-esque body horror story, but in a way that I didn’t expect. The characters were all strong and three dimensional, which made it all the harder when they were killed off or make noble sacrifices.

Oh! And a detail I forgot to mention about Soul War. I remember when we covered that digital first Ghost story that I wish that Spectre would get an update on his costume, because a ghost with green undies just doesn’t scream “dark specter of vengeance” to me. I will say that I like Hal’s version of the costume a LOT more. I mean, it’s basically Hal’s GL green costume of his classic costume but black, but I think it works so much better.

The characters were all strong and three dimensional, which made it all the harder when they were killed off or make noble sacrifices.

This is a rarity in horror movies, let alone comics. It really speaks to the strengths of Joe Hill.