Hot takes on the single best quote in the DCU..

We likely all have them. That one thing that defines a character, arc, or something.

IMO, “truth, justice and the American way” or “I’m Batman” are the cop out quotes. But, I’m sure some people disagree with that.

Best Batman quote and I think sums up the definition of heroism in the DCU.

From: Crisis on Two Earths
Batman to Owlman
“The difference between us is we both looked into the abyss. When the abyss looked back, you blinked.” 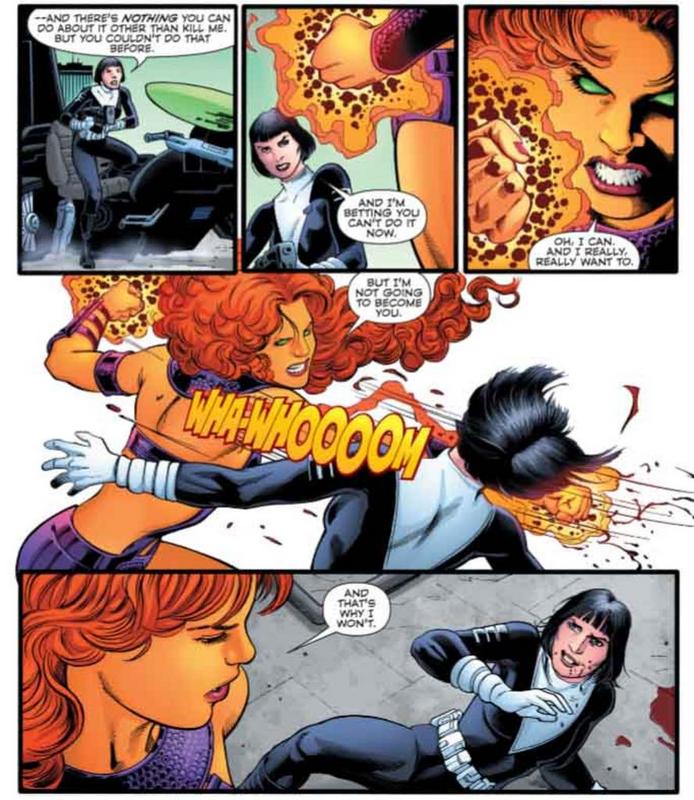 What does that quote mean to you, DS-a? What did Batman mean when he said that?

This isnt the single best quote, but it was a good one. In the flash rebirth volume 9:

…when an unstoppable force…

My favorite quote comes from “Whatever Happened to the Caped Crusader?”, by Neil Gaiman. It’s applied specifically to Batman, but I’ve extrapolated it to so much else.

“Do you know the only reward you get for being Batman? You get to be Batman.”

"You’ve got me? Whose got YOU?

“In brightest day, in blackest night,
No evil shall escape my sight.
Let those who worship evil’s might…
Beware my power, Green Lantern’s light!”

It’s something that gets used frequently enough that you sort of lose track of the meaning, but it does encapsulate the Corps’ mission very well. And it’s catchy.

He looks into the abyss. The “why do I do or keep doing this?” kinda of thing.

The abyss looks back. “What you do is pointless. You know you will never end crime, stop every wrong doing, or stop every tragedy. You are holding back the ocean with a broom. Tonight, tomorrow, next week, next year, you’re going to die doing this and when you do, Gotham will continue to be a crime ridden cesspit.”

In the face of that knowledge, Batman doesn’t “blink”. He accepts the ultimate futility of it, and yet still goes out and does what does. (Can he not understand this and still do what he does. If he believes what he does matters, that he is “not holding back the ocean with a broom”, he is crazier and more delusional than all the inmates in Arkham combined.)

In Owlman’s case, he blinks. The truth of the abyss overwhelms him and he is consumed by the abyss.

That is what makes a hero, well…a hero. Knowing that even if it is all ultimately pointless, you still try and do what you do.

I think this type of moment happens to most superheroes and why I’d argue that most superheroes are existential nihilists, if you peel back the layers of their philosophical onion. You sort of have to be. Kinda comes with the whole superhero territory.

What’s your “hot take” on that quote?

Superman:
“[Fighting Darkseid] That man [Batman] won’t quit so long as he can draw breath. None of my teammates will. Me? I’ve got a different problem. [Punches Darkseid through the wall] I feel like I live in a world made of cardboard. Always taking care not to break something, to break someone. Never allowing myself to lose control, even for a moment, or someone could die. [Punches Darkseid again] But you can take it, can’t you, big man? What we have here is a rare opportunity for me to cut loose, and show you just how powerful I really am. [Punches Darkseid across the city with a single blow]”

Does that count? My favorite scene of all time. Gives me goose bumps just typing it out, ooooooo weeeee. Its from JLU, last episode.

That’s Right! being the Flash isn’t a harsh responsibility. It’s the Dream of a Lifetime
Wally West

@LEXCORP Really hoping we see something like that on the big screen.

@majorzuma it would be unreal man

Max: Ah Booster-- I’m glad you’re back!As you can see, we’ve had quite a bit of water damage and need you to clean it up. So get out those overalls and get to work! Oh and don’t worry–
J’onn: Guy already put out the cat…I did it again didn’t I?

2 harley ones, off the top of my head

“These ‘no-nonsense’ solutions of yours just don’t hold water in a complex world of jet-powered apes and time travel.” — Superman, Kingdom Come

The last words (ever?) of Mr. Nobody: “Are you fucking KIDDING me?”

“You don’t want to feel the mode. You wanna crash the mode.” Bart Allen

“Not feeling the aster” - Dick Grayson

Green arrow has suddenly reappeared alive and well, Aquaman takes him up to the watchtower to meet the League. However, so much has changed and Oliver is not happy. half the league are made up of different members and when Kyle appears as Green Lantern in Oliver’s palace and points out there’s a new Green Arrow… Well, Ollie doesn’t take the news well and is about to shoot an explosive arrow at the window, Batman appears just in time to belt out the archaic emerald archer.

Wonder Woman: How Long have you been skulking around here?
Batman: Long enough to hear that none of you could get past your cartoonish, slack-jawed dumb-foundedness over the situation and secure any answers as to why a man we all know is dead walks around articulating like a walking anachronism. (tosses an explosive arrow to Superman)catch
Kyle: That is, by far, the most complex sentence I’ve ever heard anyone utter.
Wally: Ten bucks says he’s been hiding in the shadows for the last hour, just so he could come up with a put-down that classy.
later…
Batman: …and for the record, Wally… I came up with that mouthful off the top of my head