Hot Take: Martian Manhunter Is A Terrible Leader Of The Justice League

Coming from a fan of the character for a while now, when any discussion about the character who usually is given the moniker of “heart and soul of the justice league” comes up, you would see him described as a great leader of the team that is equal to the strength of Batman and Superman. I like to say that while not a terrible one he is far from a great person to lead this team and in fact is responsible for their biggest disasters. 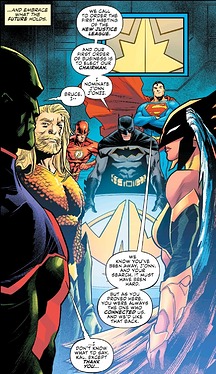 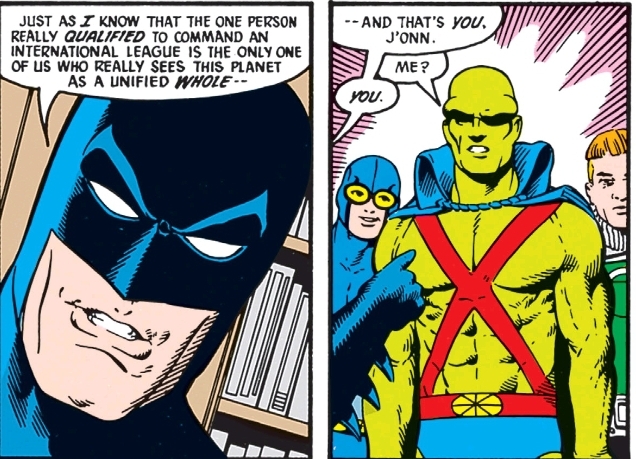 Starting with probably the most notorious line-up of the team in history, justice league of America in Detroit while initially led by Aquaman was eventually passed on to Martian Manhunter who had seen the team stagnant until they went to New York and the mantle was briefly given to Batman before the legends event forced the team to be dissolved. But not before the team lost two of it’s youngest members, Steel and Vibe. 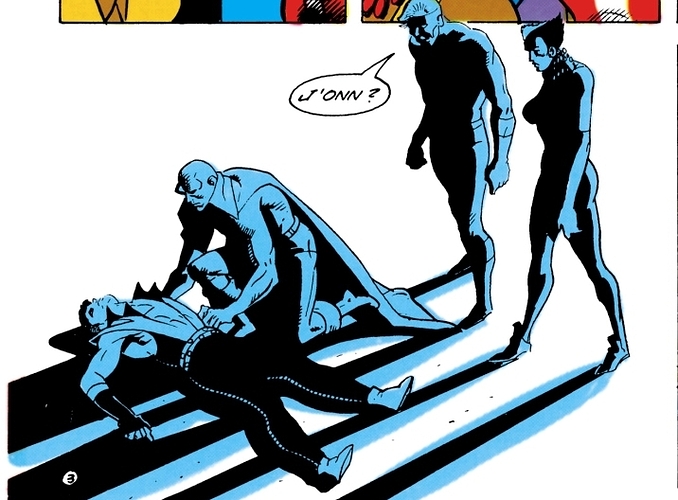 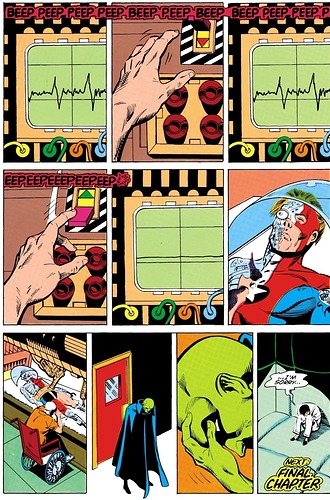 Afterwards, Justice league international briefly lead by Batman before the position of chairman was given to Martian Manhunter by Batman and as chairman while greater success was made here, the team was highly dysfunctional that team that did cause the league to be seen as weaker or a joke by other superheroes.

It doesn’t help that in infinite crisis recon (which I disagree with highly) that Maxwell Lord, the financial backer and manager was secretly running the team into the ground to make it easier to destroy all superheroes in the future by learning all their weaknesses, a leader like Martian Manhunter let happen.

We had Justice League Task force, a team that he built for the covert operations with young heroes in mind. This team in practice did not succeed as he led them on dangerous and controversial tactics that tested his teammates trust and especially his friendship with his old Justice league member Gypsy. 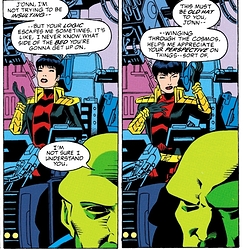 Martian Manhunter does lead two more superhero teams, justice league of America and Justice league United (Canada) in the new 52 that were too brief to get a actual read on his leadership skills. They were largely forgettable and the extent of his leadership is a team leader on those adventures.

However, one more time he was a leader to highlight was when he was a chairman of the league during the Scott Snyder run. On the surface this team were fairly successful, a united team that included the trinity and heavy hitters like John Stewart Green Lantern, Barry Allen Flash, Hawk girl, and Aquaman. That also included the team reserved members that was the entirety of heroes on earth. However, this team was also one that faced a war with the legion of Doom and their attempt to awaken a evil god to conquer the multiverse. This was a conflict that required strong leaders and while the trinity led it’s more important victories, Martian Manhunter attempt to save his old past friendship that he discovered he shared with Lex Luthor made it possible for Lex to take advantage of and “kill” the former chairman by absorbing his essence to become a martian and human hybrid. During this time, he developed a relationship with hawk girl, and it was cemented by seeing a alternate world where they were together and had a child who decided to come back with them to the main reality. Hawk girl wanting revenge and kill luthor had decided to ignore her role that may have stopped Perpetua and go after Luthor. She failed and Perpetua had enough power to alter reality by going after the prime earth. Martian Manhunter did come back by his alternate reality son sacrificing himself to awaken that part of him that resided in Lex Luthor and using his powerful telepathic abilities he attempted to convince the world to side with Justice and go against selfishness and evil. This ultimately failed and the world under his watch as chairman succumb to doom and soon the multiverse itself.
The league practically lost because of J’onn going rogue to save someone like Lex Luthor who clearly didn’t want to be saved. 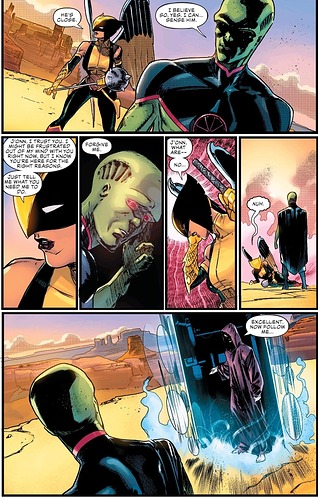 Look with these examples I am aware that not all these are his fault, they are a indirect cause of the role that falls toward him when others could not lead. International and Justice league of Detroit are examples of that. They are personally my favorite teams because they are models for how the Martian Manhunter role in the team evolved from a common member to a significant part of it. A senior member that sees the league as his adopted family to a extent, and one who who wouldn’t be the same without him. That being said, the problem with how he leads comes down to his approach. Earlier I wrote how he is a mix of Batman and superman and while it’s true, he shares both their characteristics, he also lacks their key one and that’s how his role as leader is neither inspirational like superman nor intimidating like Batman. Rather without the trinity, he usually is off-hand or focused on the mission at hand.

It’s not to say he doesn’t care about their individual welfare because he clearly does but as a hero he tends to be written as a leader who resort to let them run themselves. It’s a strategy that usually doesn’t inspire people to be effective heroes.

This is why I argue he is actually just the muscle of the league, and the team player who lets much better people on leading the team.

You are wrong. J’onn is such a nice guy he made this mistake on purpose to avoid giving the rest of us an inferiority complex.

fact is responsible for their biggest disasters.

He did not cause Heroes in Crisis. That was Wally.

But not before the team lost two of it’s youngest members, Steel and Vibe.

Quit pretending the dead stay dead. I have watched Bob the miniature horse breeder get killed by The Eraser at least 11 times, yet he is alive right now with a job at Wayne Enterprise.

seen as weaker or a joke by other superheroes.

Of course they saw that. My team sucks so badly compared to the Justice Society. It is better if the typical person knows that and goes to them for help instead of us.

Do you mean “retcon.” Do not blame J’onn for not predicting what these biographers say. They change all the time. It is pointless dealing with those weirdos. Most of them do not even dress in tights.

as he led them on dangerous and controversial tactics

Again we are dressed in skin tight spandex battling super villains. We were always dangerous and controversial.

They were largely forgettable

How dare you call the best New 52 series forgettable. 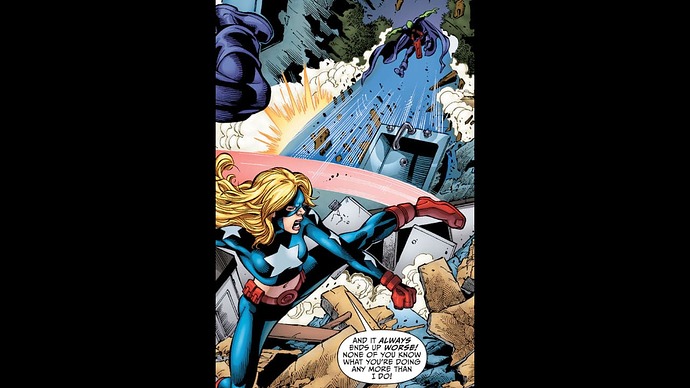 S161280×720 89.4 KB
Also Steve was the leader. Then in the terrible Justice League United Series poor J’onn was stuck having to calm down some time traveling baby killers, which he did successfully while saving the timeline. I call that a success. If you want to use those to focus on awful leadership write that Brainiac 5 is a terrible leader.

while the trinity led

So you admit during this example he was not the leader, and therefore it is invalid to the argument.

Tell that to Stargirl.

Tell that to Argus.

It’s a strategy that usually doesn’t inspire people to be effective heroes.

Tell that to Stargirl.

and the team player who lets much better people on leading the team.

Part of leadership is delegating and knowing who to listen to like when he let Stargirl deal with the time travelling baby killers.