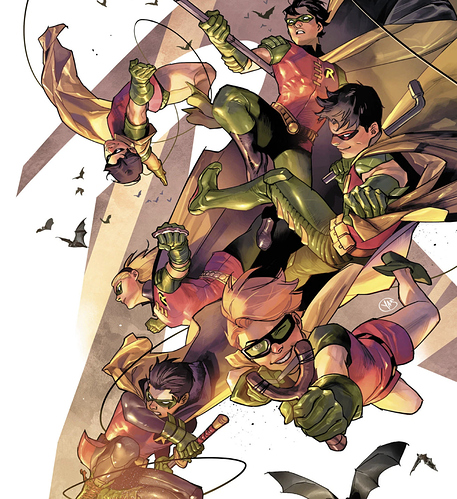 We’re debating which Boy, or Girl, Wonder is our favorite! So we want to know, which one is yours?

Why do you love Tim Drake? Or is Stephanie Brown the one? Do you think Damian Wayne is the best or the worst? Let us know down below!

Comments written before 3/18 could be read on air!

Can’t wait to hear who you love.

I’m going to give a shout out to the Robin of earth-2 (New 52), Helena Wayne! My favorite Robin is Dick but I always liked the idea of a Robin that is actually Bruce’s offspring (Damian included). It makes more sense than reckless child endangerment because he felt sorry for them. 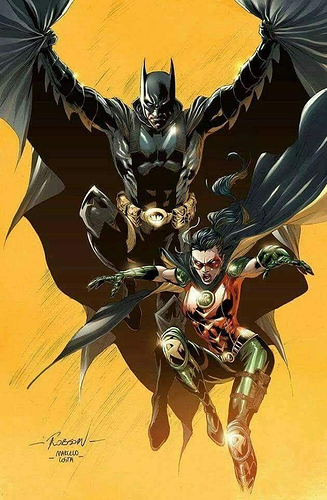 You really can’t beat the original and best Robin, Dick Grayson. He is the standard that every Robin is judged by.

There are no bad Robins, but the BEST Robin is Jason Todd. What sets him apart is that he really had to suffer, struggle, and survive in the heart of Gotham. He represents best the people who Batman has sworn to protect.

I pick Jason Todd. (Shocking twist, I know!) Dick Grayson wasn’t exactly one-dimensional during his tenure as the Boy Wonder, but most of his character development occurred after he moved to college and out of the manor. Jay gave us a look at what Dick’s growth into the role might have looked like if Golden Age comics were more interested in round characters and serialized storytelling. Then he gained another layer of complexity with his shiny new post-Crisis origin. Plus, he was in the best run ever: the Barr/Davis run on 'Tec. Winner by default.

Jason’s alway been favorite (even those it mostly my red hood bias) but he is awesome. His different attitude towards Bats and the challenges he face to become and stay Robin for it all to end so abruptly it just a great story.
All the Robins are great but Jason is my best Robin.

My favorite Robin was always Tim Drake. The only one in continuity who became Robin because he wanted to be, not because of tragedy that fell on him (that came later). The most intelligent and the best detective of the bunch (per Dick Grayson himself).

I connected with Jason Todd, particularly post-Crisis Jason, because he was basically me. I grew up dirt poor because my dad got laid off from his job and it was years before my family was financially stable again. Growing up I was the kid in my class with second hand clothing and brown bag lunches. Yet here was Jason Todd, a kid worse off than I, and he got to be Robin. Let’s just say it left an impression me. He made me feel like I was worth something and like I could be anything despite my background.

not because of tragedy that fell on him (that came later).

Not that much later.

It’s as if the other writers were like, “Wolfman didn’t give him any angst. Let’s kill his parents!” Then at the last minute, they were like, “Eh, maybe we’ll keep his dad barely alive.”

that wasn’t the point though

If we are gonna pick “best” it would probably be Tim, he was the one who did find out who Batman and Robin was.
But to me Jason will always be best. The one who is always looked down on, everyone hates. But is actually a person trying his best.

I dunno. Alan Grant was already kinda miffed that Anarky didn’t get to be the third Robin. And Tim was semi-orphaned about a year after his first appearance (and a few months before he officially became Robin), so…

Where is duke Thomas? He was technically a robin

Dick is my favorite character of all the Robins, although he was transitioning to Nightwing when I first aged enough to read the comics, rather than just look at the art. So I didn’t grow up on Grayson as Robin. Tim Drake was the Robin I grew up with. That said, it’s crazy that Dick could very well be the longest tenured Robin (44 years IRL publishing) but hasn’t worn the costume for 36 years. Solely basing my answer on which Robin I grew up with, I’d say Tim Drake, though as a character I like Grayson better, and even Jason as RH​

He already had the job officially and was already showing up in costume. We knew the score, and his dad being alive also set him apart (until the Identity Crisis fiasco).

You can say Duke. DC Daily loves all the Robins!

Tim’s my favorite Robin, primarily because he became Robin just to help people, without any sort of motivation from tragedy, but he really became my favorite Robin (and one of my favorite characters of all time if I’m being honest) due to a combination of three scenes he had that have always stuck with me. The first one is after his mom dies, in his first miniseries, where he refuses to let his anger at her death control him and instead to chooses to do the right thing instead of seeking revenge. The second one occurs at the end of the Batgirl/Robin: Fresh Blood trade where he and Cassandra Cain talk about their differences in ideologies, he talks about how it’s not okay to feel good about hurting someone else, even if it is justified. That line (and the whole conversation really) really stuck out to me. And finally, Robin #156 is one of the first issues I ever read with Tim in it, and it’s what really cemented my love of the character- it really highlights his empathy, but it was also helped by the fact that the issue spoke to me a lot personally, and I highly recommend reading it (although it should be noted that it deals with a character thinking about committing suicide, and while it felt very well handled to me, if that’s liable to making you uncomfortable I would not recommend reading it)