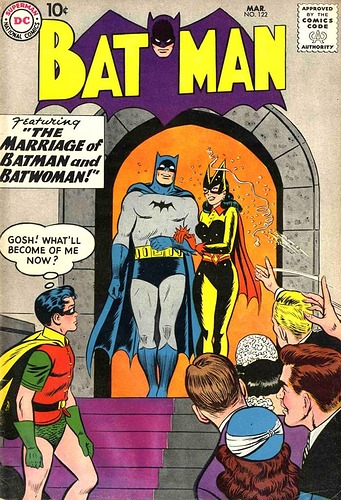 Will the Dark Knight ever take a wife? While some of his contemporaries like Superman and the Flash have enjoyed long and healthy marriages, Batman has always struggled when it comes to holy bat-trimony. As we prepare for DC FanDome and celebrate Batman Day, let’s explore Bruce Wayne’s long and complicated history with marriage and see if it gives us any insight on why he can’t seem to close the deal.

Do You Take These Women…

The Caped Crusader’s next brush with marriage occurred in 1953’s Batman #79 . A foreign diplomat had fallen for reporter Vicki Vale, and in order to prevent an international incident, she pretended she was already spoken for. Vicki identified Batman as her betrothed, and the Caped Crusader begrudgingly went along with the charade. Throughout the story, Batman and Robin give a negative view on marriage and there are lots of (now very dated) henpecked husband jokes. Like most sitcom charades, the lie spirals out of control until a real wedding is planned, but Batman’s quick thinking allows him to remain a bachelor.

This attitude towards marriage continued with the introduction of Batwoman. Throughout the early Silver Age, the idea of Bruce Wayne marrying Kathy Kane was explored, but only in dreams and fanfiction that Alfred wrote (yes, that was a real thing). Some of the scenarios had Dick Grayson anxiously wondering if marriage would mean the end of the Dynamic Duo partnership, playing into the mentality of “weddings mean the end of masculine exploits.” At the end of 1959’s Batman #122 , Bruce Wayne ponders, “I-marry Kathy? I expect some day I will marry! Kathy, eh? Well, she’s a nice girl! Who knows.” Despite this musing, Batman strongly rejected Batwoman’s affections during their adventures together.

To read more about Batman’s many encounters with marriage, head over to DC Comics!

Which Batman marriage is your favorite? Let us know in the comments!

Can’t believe I’m saying it, Batman and Catwoman do make a perfect couple when it comes to marriage.

Yes, this is true!

For many years I have been firmly on Team Talia as his perfect match, but Tom King has brought me around to Team BatCat. 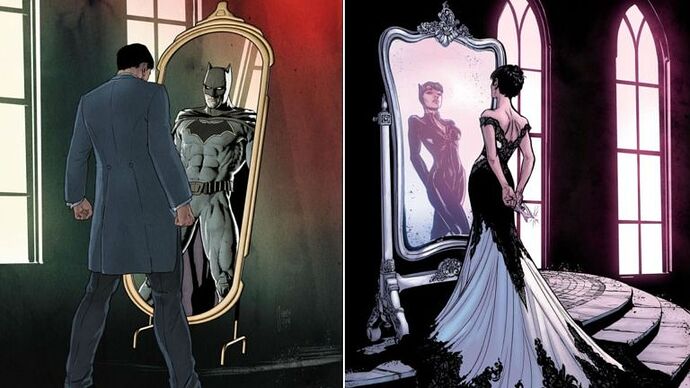 Even though it didn’t materialize, Bruce and Selina together makes complete sense. #BruceAndSelinaAreEndgame 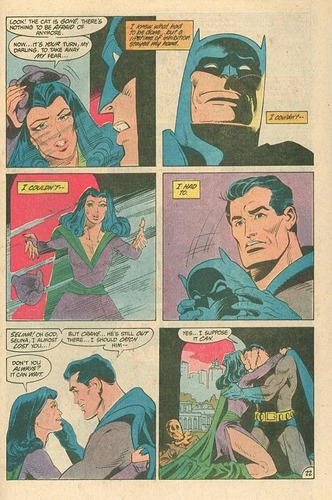 This was a great article, definitely one of my favorites on the site.

I’m happy you enjoyed it!

Selena’s dress sure was.

Selena’s dress sure was.

I would totally rock this at some fancy-schmancy event.

Fun fact: Selena said the dress was a “Joelle Jones” which was technically true due to Joelle Jones being the artist of the issue that panel took place.

For me it has always been and will always be the Bat and the Cat.