History of the Post-Crisis and New 52/Rebirth DC Universe

Inspired by the Timeline that we’ve seen glimpses of for the upcoming Generations, I thought it could be fun to try to do one based on the post-Crisis DC Universe.

As I will be presenting it on my website the DCU Guide I decided to go vertical instead of horizontal for the timeline.

This is still a first draft and I’d love some input.

Not just on which storylines should be included for which characters or whether am I missing something important, but also if you think some of it could be worded better or even if you want to contribute.

The version on the site will have additional columns featuring Aquaman, Green Arrow, Teen Titans, and Horror. I’m also open for suggestions as to which other characters or teams should get their own column. I’m currently considering JSA, Fourth World and possibly Humor and some sort of Organizations listing where stuff like Suicide Squad, Checkmate and other such books would fit in. 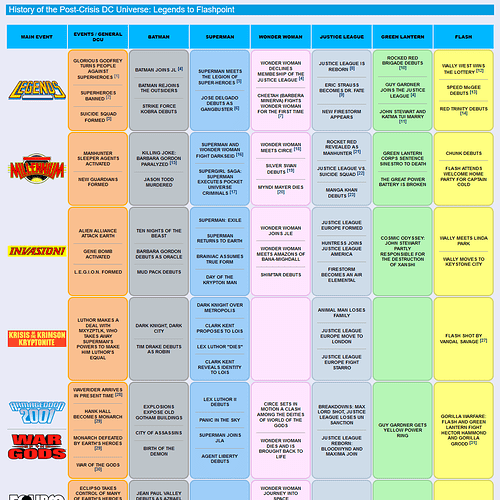 I plan to work out timelines like this one for the pre-Crisis DC Universe and New 52/Rebirth Universe as well, but wanted to share my progress so far to see if it is something anyone other than me would actually find interesting.

One thing that stuck out to me immediately (since my club is reading the story this week) is your placement of Ten Nights of the Beast. It should come before A Death in the Family. Jason is still kicking while the KGBeast is trying to take out the Gipper.

@Tenzel you did an awesome job on this! The only thing and I agree this is probably very Nitpicky but give a comic numbers if someone who wants to use this to read the actual history from the Legend area to Flashpoint. I also love how you broke it down for the main hero’s Batman Superman And etc. Really beautiful work .

This is mainly meant as a quick overview. I am working on both a more detailed timeline that will not have several columns like this but put things in their proper order, as well as an actual chronology where you can see how the books fit together.

Here’s an example of the chronology flowchart I’m also working on, which is much more detailed showing when the stories take place. It is not as nice to look at though and has very little actual text.

You are right. That’s also how I have it in my character chronologies for both Robin and Batman. It has been fixed on the website. Thanks for pointing it out.

That is super cool. I love it. What is the website? I can’t find it anywhere but here.

The website is the Unofficial Guide to the DC Universe or DCU Guide for short.

The history of the Post-Crisis DC Universe page can be found here https://dcuguide.com/w/History_of_the_Post-Crisis_DC_Universe

Just put up a version of a New 52/Rebirth era timeline as well. Not quite as detailed as the Post-Crisis one at this point but you gotta start somewhere 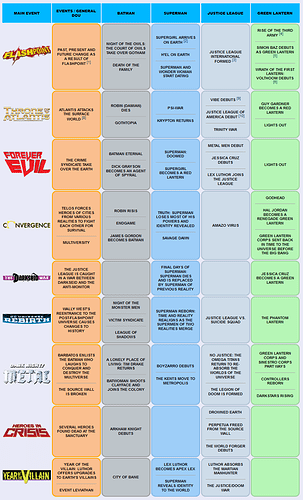 As with the Post-Crisis one this has additional columns on the site. Those are still quite unfinished though but input is more than welcome.

History of the New 52 DC Universe

Not all Main Events in the timeline are big crossovers, as we've strived to make each period last cover about one year of published material.

This is incredible. Great work.