Heroes and their Weaknesses - Educate Me :)

So we all know that heroes have there weaknesses - Superman has his Kryptonite, bind Diana’s Bracelets of Submission and she is helpless, Jason Todd isn’t a fan of crowbars… I challenge the DC Community to help me compile a list of Heroes and their weaknesses!

Hmm I have a weakness for Batwoman, does that count?

I don’t think that counts, @Mae!

I will start the ball rolling on this one - My friend Darkseid told me once that The Flash (Barry Allen) ran so fast in the build up to a battle that he died by being pulled into the Speed Force.

@Harleys Puddin this is true, i’m not sure if this scan is what your friend was referring to but…here’s an instance where Flash ran too fast and killed himself. Also I would say another weakness of the Flash would be extreme cold. 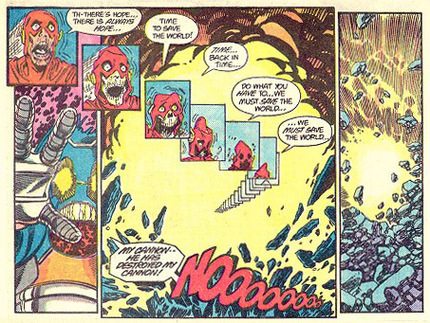 Batman: Women, Kids, his Family, his back

Rex The Wonder Dog: Absolutely nothing. I bet he could look at the Anti-Life Equation and scoff at it. He could take on the combined forces of the every Justice League from every earth with 1 paw tied behind his back. He is a force not to be reckoned with

After Adventure Comics #443, Aquaman has to come into contact with water once ever hour or he will die. Who knew?

@Applejack I think Aquaman’s weakness is that he needs to come into contact with water once every hour or he would die. You can call it water deprivation.

That makes two things I have in common with Nightwing.

@Vroom, you made me laugh so hard I just spat water on my PC

So guys and gals - asking for a friend… Anyone know the Bats weakness? (please don’t say daddy/mommy issues)

@Harleys Puddin: Just do what you did when you got Batman restrained above the piranha tank. Bait him with some sob story and sucker punch him.

@Sushi-Volcano, Stop giving away my secrets!! You never know who is lurking around in here

HP: as a wise bro-ish dude once said “Redheads, ya gotta love 'em!”

I hope your PC is okay.