Of course before we start Young Justice: Outsiders is back on Tuesday with episodes 14-16.
If you want to read something start reading The New Teen TItans run starting with #1 (1980) which introduces Beast Boy, Cyborg, and Raven for the first time. Later parts of the run introduce Geo-force and Tara. Halo and Forager.

Of Course, you only have to read what you want to read!! You can join even if you only read one comic. So there is little reason NOT to join.

Thanks everyone
Nathan.Payson (Your friendly neighborhood reporter) 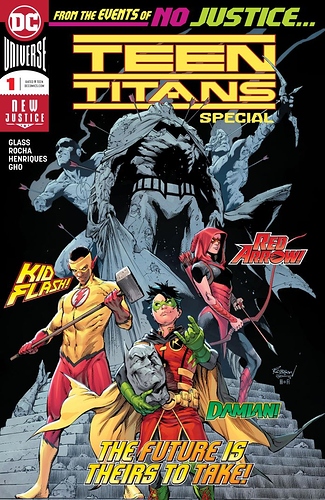 Harley Quinn V. joker is phenomenal somehow. Harley and Joker have such an interesting relationship which was explored with massive stakes. Anyone thinking Harley isnt free of the joker should read this issue. The series as a whole deserves recognition as one of the best miniseries of 2018. Im serious!

Will there be a separate thread for the New to DC book club this week?

Yep. I’m just behind on posting it.

Something happened with my post, I’ll rewrite it when I wake up!