HENCH: The New App to Guide Goons to the Best Crime Boss 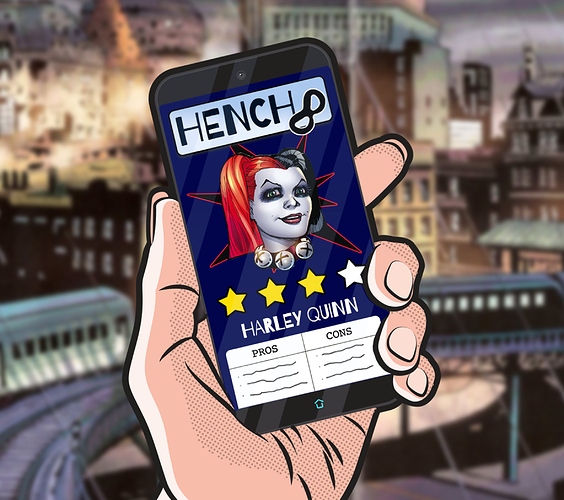 Have you ever wondered what Gotham City’s henchmen think about their bosses? Or how gangsters breaking into the business decide which of Gotham’s maniacs to work for? Guess what - there’s an app for that!

DC Universe is proud to present an exclusive, never-before-seen look into a Super-Villain employer review app created by henchmen, for henchmen to dish on their bosses and give up-and-coming criminal cannon fodder the guidance they need. We managed to dig up 13 reviews written by a user who will remain anonymous for their own safety, complete with star ratings, pros, and cons. Take a look here in today’s News article, and find out who you’d work for to start your own life of crime.

Make sure to leave your own henchmen reviews in the comments below!

I’d join with the Penguin!

I have to agree with @Reaganfan78, I would join up with the Penguin too!

A lot of good choices but Who wouldn’t want to join kite man. He has both Hell and Yeah

I love how most of them have good pay as a pro. Explains why they all have so many henchmen in the first place. Personally, if I were going into the henchman game, Clock King seems like my speed.

Avoid if: You want to be taken seriously ever again.

Totally signing up with Red Hood! Though Falcone was a close second. I guess those Italian genes come in handy sometimes

Carmine won’t take me since I’m not Italian

. Would have to be Penguin (for the money) or Harley (for the fun).

“Avoid if: You’re squeamish or you can’t get the job done”

i feel personally discriminated against

it came down to harley or red hood, and red hood’s too intense.

Become a minion for the Monarch! 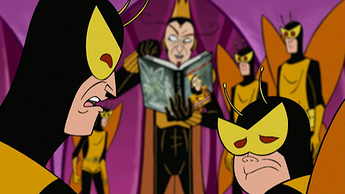 Two-face!! because he’s a good boy and a bad boy

Forget the so-called doctor hacks like Dr. Elliot or Dr. Death. Join Pyg the Napoleon of the barnyard and let your dreams come true in his topsy box!

Great for: People looking to reinvent themselves.

Avoid if: You’re squeamish around knives.

Thank you all for your reception on this article! I’m so happy to see you all running with this ball. Please, keep those reviews coming, and letting us know which boss is right for you.

As a special treat, here are a couple reviews that were cut from the final edition:

Do you love gathering dirt, but hate getting your hands dirty? You want a boss with a head on his shoulders, but less of a stickler than Clock King and less insulting than the Riddler? Then you can count on Calculator.

Great for: The squeamish criminal, and those who’ve always secretly wanted to let a computer run their life.
Avoid if: you don’t want Huntress shoving a bolt where the sun don’t shine. Ouch.

Okay. So you’re looking for a more classic operation, but Falcone’s too Italian and Clock King’s too much of a hardass. What’s a hench to do? Well, don’t go shopping around the smaller gangs just yet, because if you’re willing to put up with just one (1) nonsense, there’s a solid gig waiting for you with the Ventriloquist.

Great for: Dependable workers looking for a dependable boss, Prohibition era cosplay enthusiasts.
Avoid if: You’re not entirely sure if Scarface really is possessed or if Wesker is just nuts, but either way, that doll creeps you out.

(And yes, @TravisMorgan: I’ll exclusively admit here to basically every pitch I write being at least partially inspired by The Venture Bros.)

Hahahaha~!! I love this so much. Thank you @HubCityQuestion

you connect all the dots. Not that that’s a conspiracy or anything.

I remember reading a story about 4-5 years ago published by DC’s biggest competitor that featured an app called “Hench.” It was written by Nick Spencer, who also, at one time, wrote an amazing Jimmy Olsen story for DC.

Sorry if that makes me a spoilsport - that was not my intention, but I wanted to make sure credit is given where credit is due.

Please, carry on with the fun.

Definitely a coincidence - I had never heard of that comic before writing this.

Great article. I would have to go with either Calendar Man or Clock King. Harley and Kite Man sounds the most fun to work for.

Well, their comic wasn’t really called “Hench”, but the app in their story had that exact name. It was a comic starring a character you have definitely heard of - he’s even had a movie or two in the MCU. I am just withholding the name because I want to minimize how much I am talking about their characters - I want to respect that this is the land of DC Comics and DC Comics characters.

I absolutely believe you, though, about it being coincidental. Having been a comic reader for 40 years or so, I can’t tell you how many ideas I have had that ended up being coincidentally used by writers in comics later on, and the duplication of ideas HAD to be coincidental. We are all in the same head-space, so of course it happens on occasion.