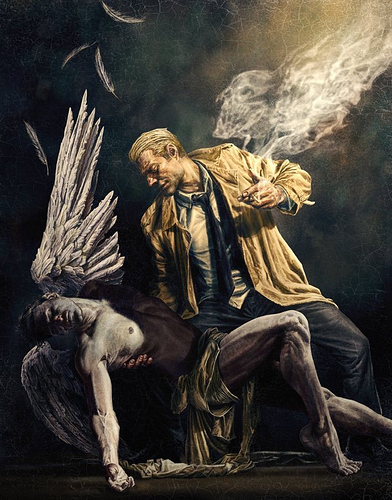 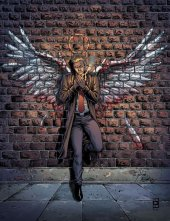 “A billionaire falls out of the sky and is gruesomely skewered on a church spire. Bizarrely, Angel Wings are attached to his back. More follow until, hallelujah, it’s raining businessmen. Detective Aisha Bukhari is stumped by this, until she’s visited by her childhood friend, occult investigator John Constantine. DC’s Hellblazer discovers a link between the falling elite and a shocking moment in his and Aisha’s misspent youth. How do these killings tie to the first death on John’s hands? How does this involve heaven and hell? Even if this is kind of John’s fault, will Constantine be happy to let a few more rich bastards fall from the sky, like a vindictive Robin Hood? It’s an all-new DC Black Label mystery starring John Constantine in his very first tale spun by acclaimed writer Tom Taylor (DCeased) and artist Darick Robertson (The Boys)!”

This book looks like it’s going to be AMAZING!!!

I like the way Taylor writes Constantine. Looking forward to this.

I’m pretty new to Constantine. SUPER excited for this!!!

This book is fantastic. This is the kind of John Constantine story I’ve been looking for. The writing is great, the art is awesome, and the format is awesome. I would love all comic books to be this size. I’m greatly looking forward to Book Two next month. Well done!

@hashtag-goodtobejo, have you had a chance to check this one out yet? I like Constantine but can’t ever get into his stuff. I feel like the stories I like the most are ones with him and Swampy. Last BL I finished was The Question and was a tad let down with the ending. Felt like they could have explored more of the plots they introduced and with how it ended, it was a bit of a “what was the point of this” kind of story. Just a little hesitant to spend the extra bucks on this one and might just wait till it ends up on here (DCUI). Let me know what you think when you get to reading this.

Some Constantine stuff is so strange I sometimes have a hard time following what’s going on and it can get frustrating. This story is easy to follow, at least to me. I think it will attract more people who want to try JC out. But for people like me who are used to his stories, it’s almost like giving my brain a rest, ha ha. I think you’ll like it.

Have to admit that I didn’t much care for this issue. Well, some of it was ok, but two things really bothered me. One was the depiction of Lucifer and another was the fact that a character who died was identified as being a specific political figure (in position, not in name). One of the things I’ve liked about Hellblazer is that it appears to take place in a world much like our own with actual real life characters being referenced by name.

Thatcher’s “rule” was a big part of the tone of the book originally and other political figures have been referred to by name, to adress current events. When you kill off someone who you know there’s only one of at any given time, that somewhat ruins the illusion.