Since the Fawcett Comics characters were acquired by DC, Mister Banjo has only made three appearances – 1983’s DC Comics Presents #34, and Scooby-Doo Team-Up #31-32. Perry White didn’t feature in any of them.

Garth met Jackson Hyde for the first time in 2016’s Titans: The Lazarus Contract, where Garth gave Jackson his blessing to use the name Aqualad. 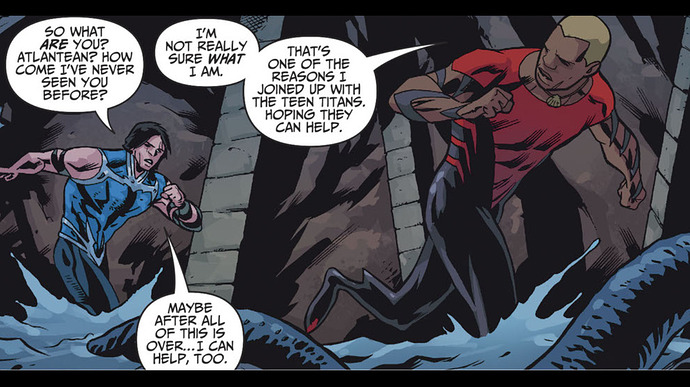 Hello @HubCityQuestion, Has Sandman (your favorite hero) ever met Sandman (from 1966 Batman)?

Have I called Sandman my favorite hero before? Dream of the Endless is my favorite DC character, but I definitely wouldn’t call him a hero. He’s more of a neutral entity.

But the Sandman you’re referring to has never appeared outside of the “Batman '66” universe, likely because there are already a bunch of different people who go by “Sandman.”

Dream of the Endless is my favorite DC character

Wait, even more than The Question?!? Or are you considering The Question a Charlton character?

OK, putting you on the spot, between the two, who’s your favorite character: Dream or Question?

Dream. But I identify personally more with The Question.

I identify best with Superboy Prime.

It just goes to show how little I know about the Sandman. I’ve seen you mention him a few time and thought he was one of your favorite, and like you said, there’s many Sandman characters, I wanted you to know which one I was talking about.

In the Smallville episode “Absolute Justice,” Wesley Dodds was killed by Icicle Jr.

Alex Danvers is an exclusive character to television, and as such hasn’t met any characters from the comics.

Got a few for ya, oh Mighty Q-meister,

1 - Have Strix and former Batgirl Cassie Cain ever met?
2 - How about Tommy Monaghan and Slade Wilson?
3 - Have crime boss Rupert and his niece Bethany Thorne ever shared space
together, in print?
Finally, how about Strix and Bethany. Ever crossed paths?

1 - Have Strix and former Batgirl Cassie Cain ever met?

Nope. Although she has met Cass’s mother Lady Shiva in the 2014 Secret Six series, and creator Gail Simone has expressed interest in writing the two meeting someday.

2 - How about Tommy Monaghan and Slade Wilson ?

Also no. Slade never appeared in the Hitman series, and Tommy made few appearances outside of it before his demise.

3 - Have crime boss Rupert and his niece Bethany Thorne ever shared space
together, in print?
Finally, how about Strix and Bethany . Ever crossed paths?

Bethany’s only appearances to date were likely in an arc you’ve already read, Birds of Prey #93-95. Nobody’s brought her back since that debut.